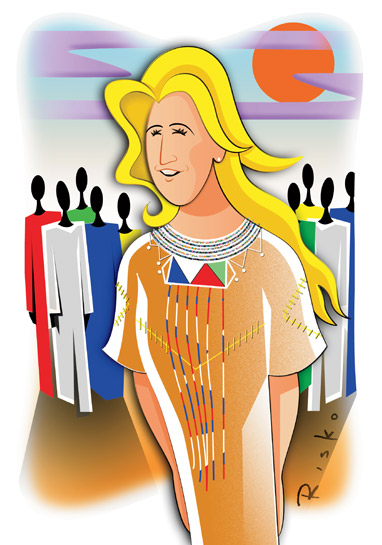 When Marett Taylor says that her current hometown of Lake Forest is top on her list, it’s a rating worth taking note of. As the Vice President of Sales for Abercrombie & Kent USA (A&K), the travel company founded by her family over half a century ago, Taylor’s roster of residences is wide and varied. Growing up between safaris in Kenya and skiing the Montana mountains, she appreciates her proximity to the North Shore’s trio of lake, land, and city. “The Midwest is one of our biggest markets, not to mention the convenience of being a direct flight away from pretty much anywhere in the world,” she says. Whether up in the air or on the ground, for both Taylor and A&K access is key to their success and no distance is too far.

“My grandmother was a sophisticated London debutante with an intrepid sense of daring. She sailed on a ship from the U.K. to Mombasa to marry my grandfather, Colonel John Kent,” Taylor recalls. The couple began taking friends on safaris, ultimately realizing a rare market opportunity. After raising their children in Kenya’s Aberdare Mountains amidst leopards and elephants in the forests surrounding their farm, they moved to Nairobi and established A&K. The business, like the life of its proprietors, mixed adventure with a touch of luxury—a signature of its success. Similarly, Taylor’s own parents had a cross-continent courtship. Her mother arrived in Montana, stopping on a cross-country drive for a visit during rodeo week. She met Taylor’s father, who grew up on a ranch and still works in ranch real estate out West. Today, Taylor’s uncle Geoffrey Kent, also an A&K founder and current co-chairman, is the impetus behind the brand’s now global presence with 55 destination management office locations, a full staff in the most highly desirable destinations, and sales and marketing headquarters in England, Australia, and Illinois.

Taylor’s exposure to the industry started at an early age as a third-generation female safari guide. She decided to pursue studies in America, first at boarding school in New Hampshire and then at Middlebury College, with a focus on environmental studies. Her subsequent work as a field biologist took her to various seasonal stints that ranged from Costa Rica and St. Lucia to Yellowstone, and ultimately back to graduate school for a degree in environmental economics at Duke University. While she thought a career at a place such as the World Bank might be in her future, along the way, Taylor’s interests had evolved into eco-tourism and a return to her roots.

Safety, security, and the deep local knowledge in each region are what Taylor feels set A&K apart. She has opened camps and offices all over the world, driven clients to the doctor’s office in a foreign country, and even arranged for a wheelchair-bound guest to have a sedan chair designed for the trek to see gorillas in the wild. “We can make any dream come true,” remarks Taylor, “and post-pandemic, people seem to be going straight for those experiences.”

She notes that there has been a recent surge in small group travel via private planes to help bypass the vagaries of commercial airlines, as well as trends in longer, multi-destination vacations. “We have a guest-first mentality and, in turn, they are incredibly loyal, but it’s never lost on me the multiplier effect of the experiences we create,” she says. “Each individual working with us in less developed regions supports multiple family members with shelter, food, and schools, and the fact that our experiences contribute to their lives gives me great pride.” It’s a pay-it-forward notion that she is already handing over to her own 9-year -old daughter, herself now a budding safari enthusiast. “People frequently ask if it’s worth taking young children because ‘will the memories endure?’ To me, it’s not about that—it’s about learning how to have empathy, perspective, and patience. Plus, I often find kids always do remember.”