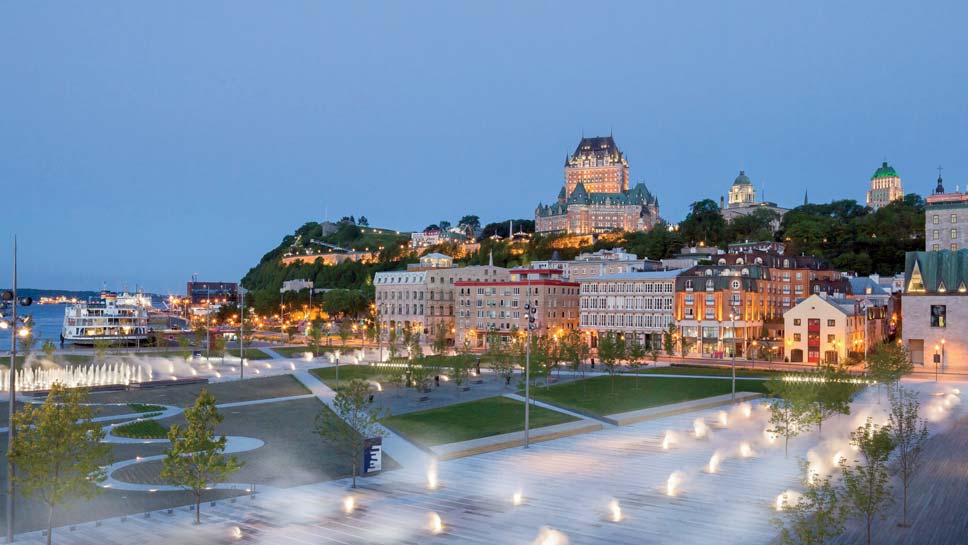 Beloved for its Old World character and charm, Québec City is a Francophile’s dream steeped in 400 years of history. North America’s cradle of French civilization is accessible via a twohour flight from O’Hare airport (about the same time it takes me to drive to Chicago in traffic). A visit to one of Canada’s oldest cities and the only remaining walled city in North America makes you feel as if you’ve traveled back in time to the elegance of centuries past.

Situated on the cliffs overlooking the great St. Lawrence River, Old Québec, a UNESCO World Heritage site, has a fairytale essence with its narrow cobblestone streets and gorgeous architecture— think stone facades, grand cathedrals, and steeply pitched roofs. With French (the official language of the province) words dancing in your ears, café tables spilling out onto the cobblestones, and scent-filled bakeries dotting every corner, you can hardly believe you aren’t in the Old World. One of the many things that I absolutely loved was the sense of safety. No matter what time of night, we felt completely at ease strolling arm in arm, without a care in the world. Our laughter and philosophical banter were our only focus (as it should be). 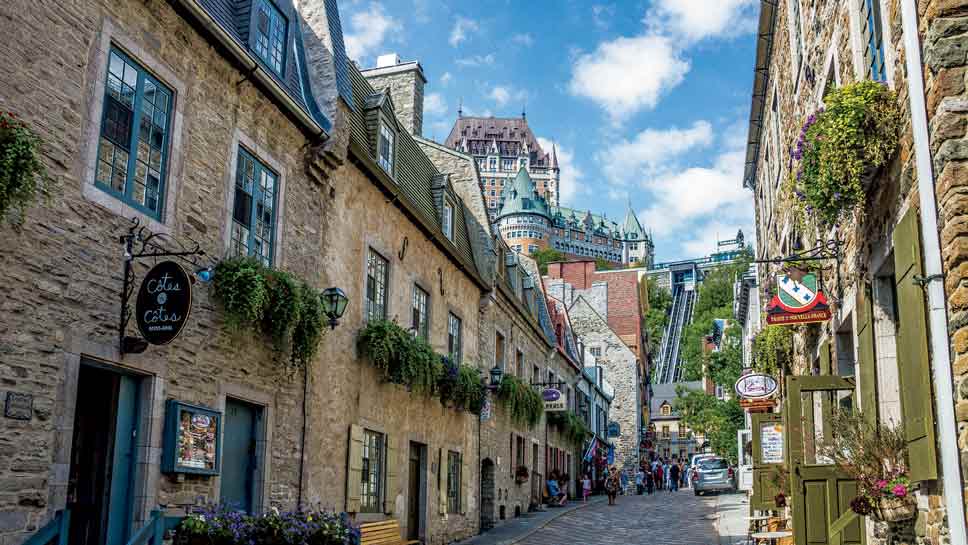 We chose the luxury Auberge Saint-Antoine located in the historic district of Québec. The hotel stands on an archaeological site that has links to every stage of the historic district’s evolution. The hotel’s proprietors, the Price family, have masterfully mixed hospitality with history—creating a luxurious hotel that celebrates the centuries of Québec City. More than 500 archeological items are on display in the public areas, corridors, and rooms. Even a simple elevator trip is remarkable because it takes you through three and a half centuries of history; with each floor representing an archeological layer.

Every suite has a name, a signature artifact, and a story. My cheerful river view room, the “Lacy Glass Room,” incorporates the color cranberry—an ode to a fragment of a delicate glass European lamp sold between 1880 and 1925. In addition to the artifacts, the hotel incorporates stones from ancient French structures and the reception’s counters are made from oak timbers once used in 19th-century wharves. While the hotel celebrates the past, it is also outfitted with the most modern of amenities.

The Price family, with plans to expand, recently purchased the building next door. It was under construction when we visited, but when complete it will offer large suites for VIPs and multiroom suites for families. Celebrities flock to Québec City; the next time Celine stays at the Auberge Saint-Antoine, I suspect she will be quite thrilled with her brand-new accommodations. saint-antoine.com 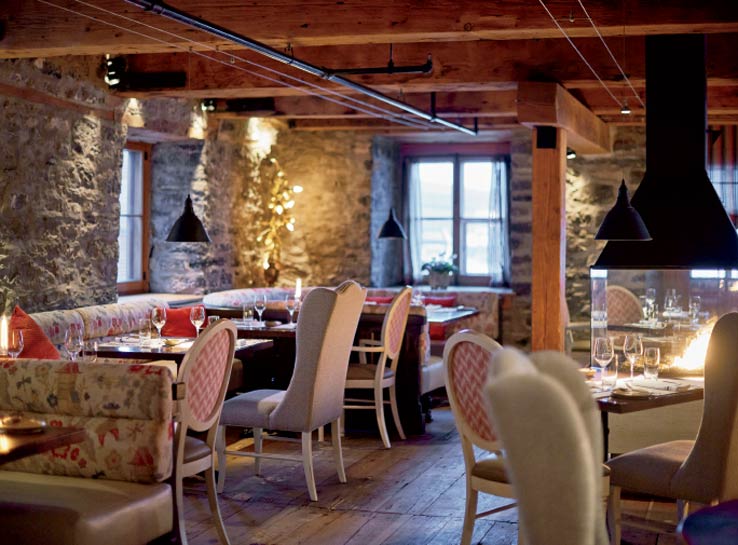 Overlooking the St. Lawrence River, this charming restaurant was named in honor of Muffy Price and exudes cozy elegance. The original stone walls and wooden beams of this former 19th-century maritime warehouse create a welcoming atmosphere in one of Québec City’s most historically significant buildings. The menu is a brilliant composition of Québec gastronomy focusing on savory flavors and ingredients from an organic farm on Île d’Orléans. The presentation is a work of art, and I highly recommend the duck if it is on the menu. 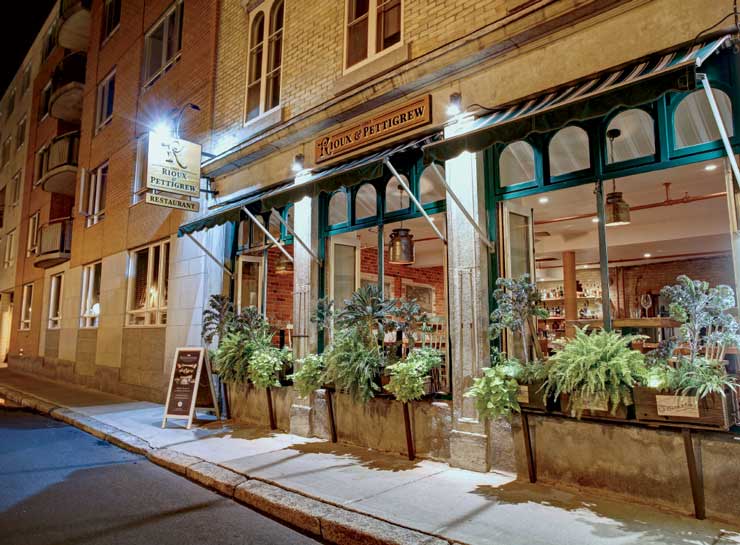 A fan favorite on Rue Saint-Paul, this charming eatery and a fixture in the Old Port of Québec was named in honor of Mr. Rioux and Mr. Pettigrew who opened a general store in the 1860s. Those gentlemen would have surely approved of the restaurant’s focus on “boreal cuisine,” which uses seasonal products from small local producers and farms to assure quality ingredients. We opted for the blind-tasting menu and were dazzled by each course and wine pairing. 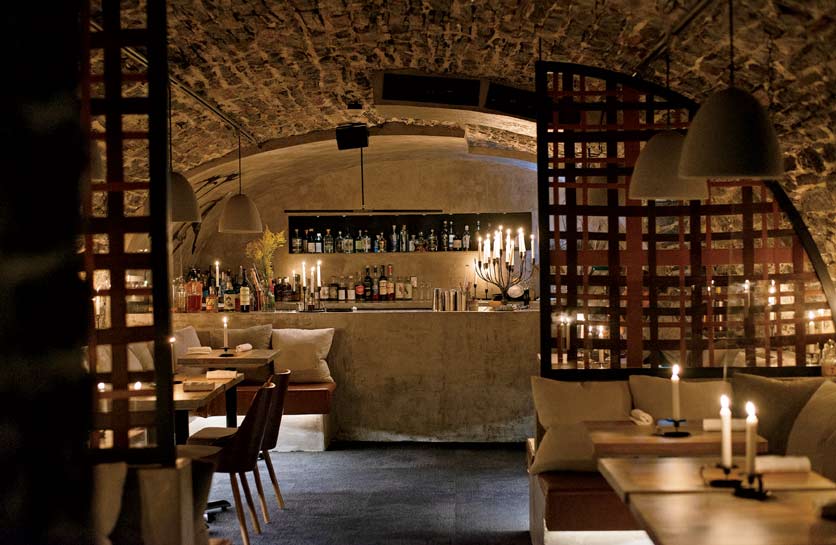 Interested in a three-hour culinary journey that is out of this world? Then book early at this Québec hot spot nestled between the St. Lawrence River and Place Royale. Reservations are essential because guests are texted the combination to the keyed lock on the restaurant’s front door. As you push open the heavy door, darkness yawns before you. A backlit forest motif emerges once your eyes adjust. A labyrinthian hallway delivers you into a barrel-vaulted stone room where the adventure begins with the first three courses of the 16-course meal. 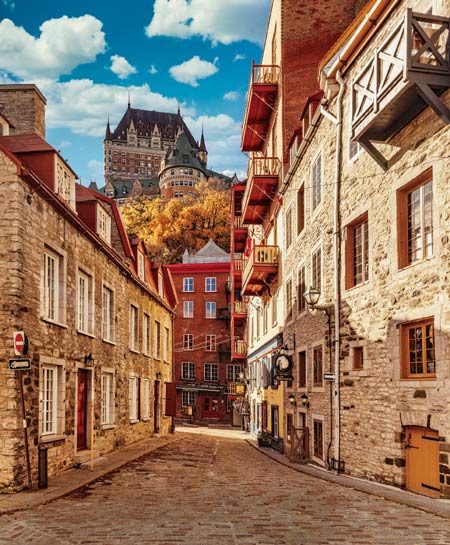 Before we began our 16-courses, the barman arrived with an isotonic beverage brimming with vitamins to prepare us for the many libations to follow. One of which contained a beautifully frozen blueberry slush that spewed fluffy white smoke when dry ice entered the glass—breathtaking in presentation and taste. 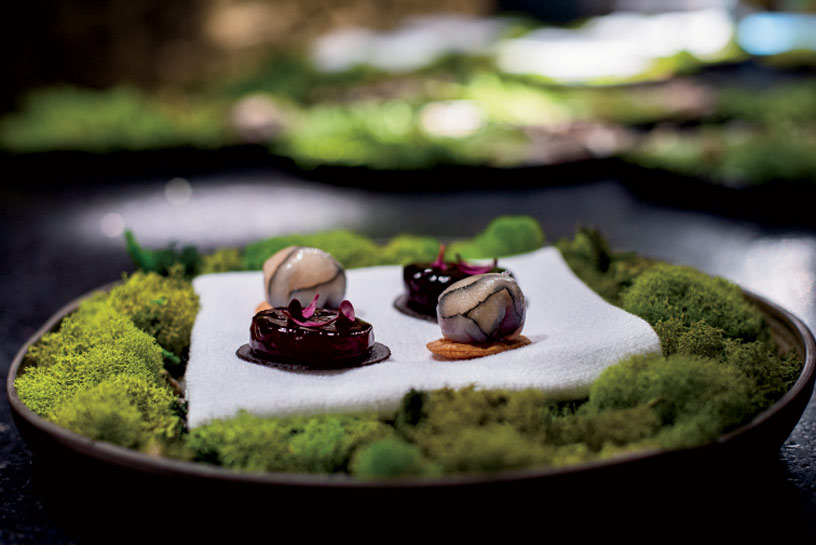 The Tanière3 experience is a blind-tasting, boreal cuisine menu. As every menu is different, I won’t describe each devastatingly beautiful and tasty course. I, however, must describe two experiences that speak to a truly exceptional level of service and attention to detail. First, after moving into the main dining room for the “dinner” courses, a key was placed on my plate. It opened a drawer in the table where I found a note with my name, welcoming words, and prose inspired by the caviar delicacy that was served next. Later, at the evening’s end, we found ourselves in a magical room resembling an enchanted forest of birch trees. Here we were each given a menu with a gold wax seal—a memento of an unforgettable feast. This bastion of excellence was recently awarded the coveted CAA/AAA Five Diamond designation and should not be missed.

The conveniently located Bar Artefact is the perfect place to enjoy the Auberge Saint-Antoine’s signature drinks. We took a mixology class with head bartender Félix-André and enjoyed a fairly boozy afternoon. My favorite? An Aphrodite cocktail made with lycée liquid, vodka, grapefruit, and ginger. The bar showcases relics unearthed on-site during one of the excavation digs—be sure to visit the cannon and the cannonball still attached to the wood it crashed into eons ago. 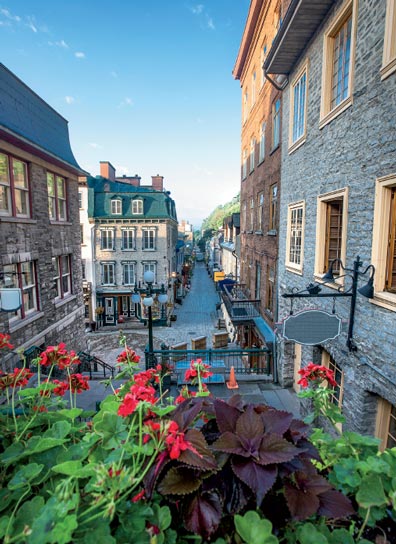 A view of Petit Champlain from above

Hire a guide (we recommend Tommy Byrne 418-999-7096) for an engaging education about the city’s history and culture. Old Québec is the most intact fortified town north of Mexico, retaining its colonial architecture for more than four centuries. It is the historic and cultural heart of Québec City and the birthplace of French North America. We began our adventure at the foot of the famed Chateau Frontenac perched just above the St. Lawrence River at what must be the city’s highest point. Here you will find the monument of Québec City’s founder Samuel de Champlain. My favorite neighborhood on the tour was Petit Champlain. I adored the architecture—houses with charming dormer windows, gabled roofs, and wide chimneys. In winter, this pedestrian street is decked from cobblestone to rooftop in all things Christmas. Seeing Notre-Dame-des-Victoires, one of the oldest churches in North America, and the immense Québec City trompe-l’oeil mural gives you a glimpse into the city’s history and culture. 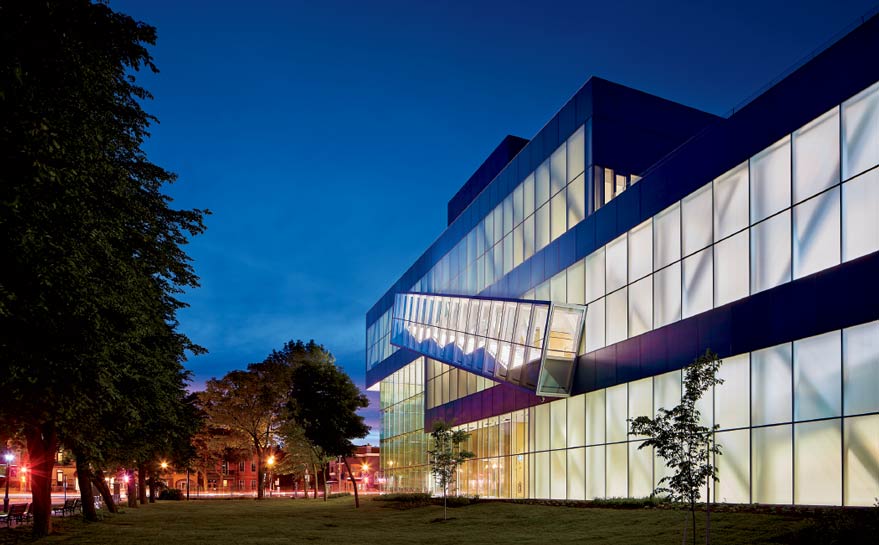 This stunning museum contains three buildings offering a vast panorama of Québec’s art history from the 17th century to the present day. We visited the spectacular Pierre Lassonde Pavilion, which houses the museum’s expansive collection of contemporary art dating from 1960 on. During a fascinating tour, we learned about the “King’s Daughters,” the 800 women who immigrated to Québec in the 1600s under a program designed by Louis XIV and the controversy that surrounds that bit of history. I can’t wait to return to visit the Charles Baillairgé Pavilion, which occupies a former prison and now uses the cells that once held prisoners to hold art. 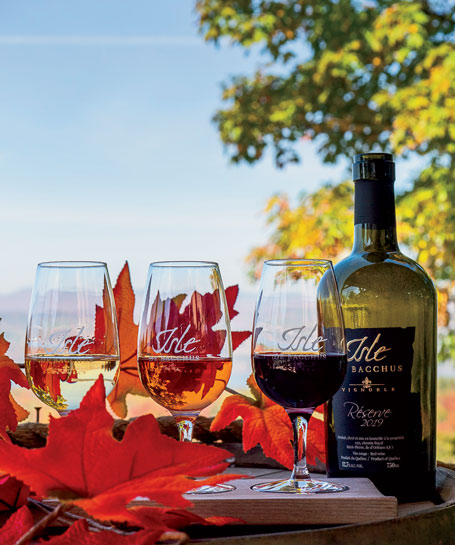 Rent a car via volvodequebec.com and visit Île d’Orléans known as “the garden of Québec,” located just a half hour from the city. Spend the day experiencing all that this verdant island has to offer. Start with Cassis Monna et Filles, the winner of many international awards for making black currant products. The black currant, known by Québecers as “gadelle noire,” is a remarkably fragrant, purplish-black berry originally appreciated for its medicinal qualities. The berry is not only brimming with vitamin C and immune system boosters but also creates incredibly tasty libations. Visit the store downstairs to taste the wide variety of products from wines and liqueurs to vinaigrettes and foie gras mousse. Pop into La Monnaguette upstairs for their famous Poutine—an oddly delicious combination of French fries, cheese curds, gravy, and duck. You’ll need something in your stomach for the rest of the day’s tastings. cassismonna.com

Next, visit the Isle de Bacchus vineyard for a wine tour and tastings. Founded in 1982 in Saint-Pierre de Île d’Orléans, the vineyard is a pioneer in the history of Québec viticulture and produces red, white, rosé, aperitifs, and liqueurs as well as internationally renowned ice wine. This was my very first introduction to “ice wine,” a beautifully fruity dessert wine produced from grapes that have been frozen while still on the vine. The setting is breathtaking with vines cascading from beneath the main house to the St. Lawrence River. isledebacchus.com

The heart of the island is home to a beautiful orchard, Domaine Steinbach. The orchard, set on the St. Lawrence River, contains 3,000 apple trees and soon will be 100 percent organic. I highly recommend tasting the flight of ciders to witness the scale of flavors. The quaint store offers a delightful array of ciders, jams, butters, and mustards. domainesteinbach.com

Our last stop of the day was OhBio-Ferme Jean Pierre Plante, a pristine farm with the most delicious produce. The certified organic producers, Jean-Julien and his wife, are passionate farmers who take extraordinary pride in their products and have a deep respect for nature—pride and respect you can taste. The farm family has a close relationship with the Price family (owners of the Auberge Saint-Antoine), and the farm’s fruits and vegetables are incorporated into the hotel’s cuisine. ohbio.ca 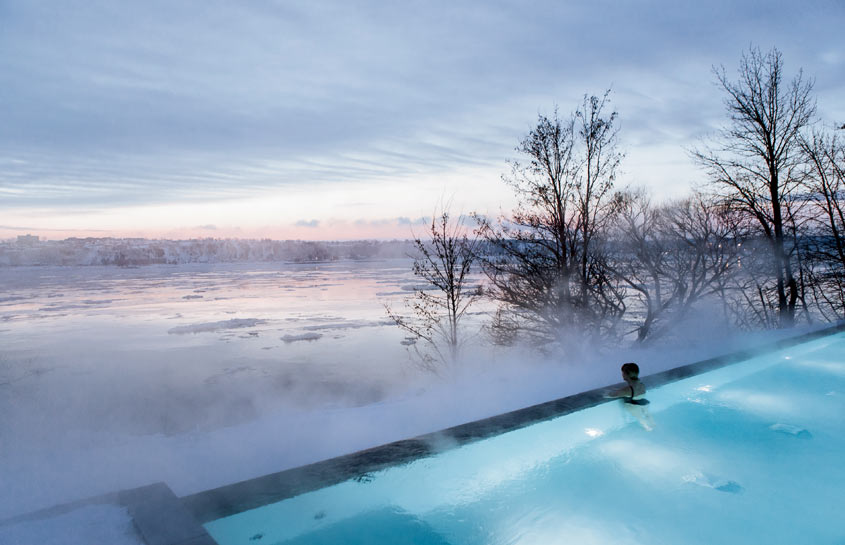 For a Nordic spa experience beyond compare, make the short jaunt to Strøm Spa Nordique. This is an ideal spot to experience thermotherapy, a thousand-year-old wellness ritual that uses water for therapeutic purposes. Our treatment began with immersions in glorious, outdoor heated pools followed by a variety of cold plunges all while enjoying river views and birdsong. You could easily spend hours here enjoying the various steam rooms, saunas, and serene relaxation rooms—they even offer gourmet regional cuisine, beauty, and spa services. I could actually live there. One thermal experience I missed is the candlelit indoor flotation salt bath. I am dreaming of going back for this meditative experience. stromspa.com 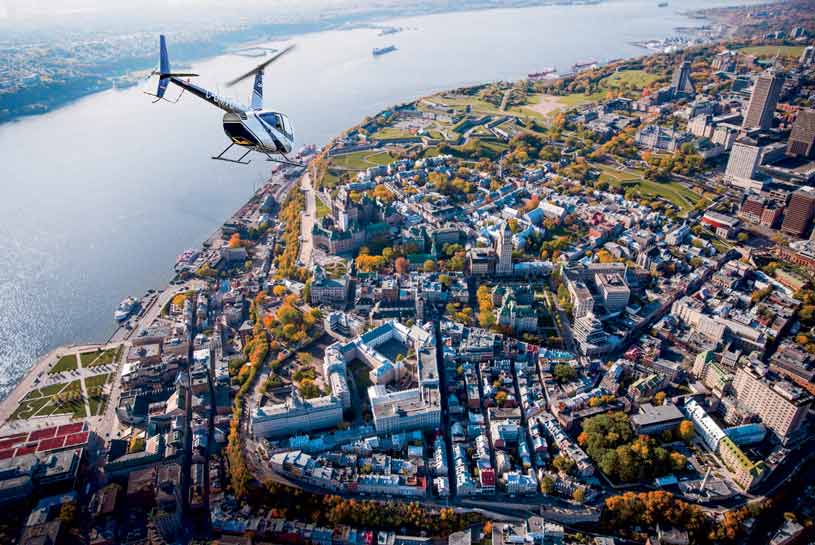 Aeriel view of Québec from helicopter. Photography by Manu Coveney

With so much to experience in this extraordinary city just two hours away from Chicago, why am I not there several times a year? Perhaps that is a New Year’s resolution. For you too? Bon voyage!