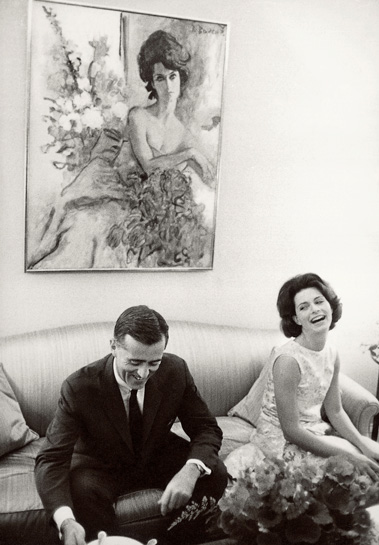 The newlywed Blairs at home in the embassy residence, Copenhagen, 1961. They sit beneath Renée Bouchet’s portrait of Deeda

The new release of Deeda Blair: Food, Flowers, & Fantasy (Rizzoli), is a page-turner, both for its presentation and its prose. In the book, Catherine Gerlach Blair, known as “Deeda,” reveals the inspirations behind her table settings, renowned for their menus and decor. Some selections were influenced by places she visited, such as the interiors of Gustav III’s Pavilion in Stockholm’s Haga Park or the grounds of the French chateau once belonging to her friend, couturier Hubert de Givenchy. She also shares tips learned over a lifetime of entertaining including where to buy fine caviar at a reasonable price and treasured family recipes.

It was Eunice Kennedy Shriver, living in Chicago in the 1950s with her husband, Sargent Shriver, who initially introduced Mrs. Blair to her late husband William McCormick Blair Jr. His father was a founder of the investment banking firm, William Blair & Company. Mr. Blair, a lawyer by training, chose a different career direction. He worked with Illinois Governor Adlai Stevenson, before becoming the U.S. Ambassador to Denmark and the Philippines during the Kennedy and Johnson administrations. In 1971, at the invitation of Senator Robert F. Kennedy, Ambassador Blair was named General Director of the John F. Kennedy Center for the Performing Arts in Washington, D.C. 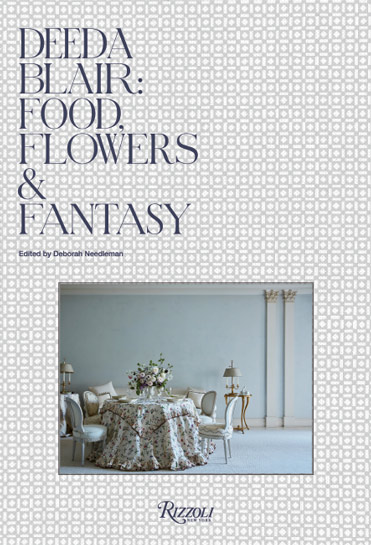 While the Ambassador was lauded for his devotion to public service, Mrs. Blair devoted her considerable talents to the arts and philanthropic efforts toward scientific and medical advances. Her signature coiffed hair and exquisite sense of style have always made her a sought-after subject of fashion bibles like Vogue and Harper’s Bazaar and photography greats Cecil Beaton and Andy Warhol.

Now, her own artistry and talented vision will captivate her readers and admirers. In our interview below she graciously answers questions about the publication and her past and present pursuits.

What made you decide this was the right time to write?

At the beginning of COVID, I was watching all the political news on television. I would always have art books and magazine pictures in my hands during the interminably long commercials, and I would make files for the next scrapbooks. A friend and editor Deborah Needleman saw them and suggested that I create a book. So, when quarantine began, I started to select pictures and think about ways it could be as different as possible. It was all about looking back in my engagement books and doing a great deal of reading.

Both my husband and I were keepers of scrapbooks, his date from childhood and continued until the end of his life. There are more than 50 very large books at the Chicago History Museum. In my home, eight books of highlights remain from all of our family and friend-related events.

Then, I have 22 more parchment- bound scrapbooks that are totally different. They are filled with pictures of places, travels, and works of art that I find beautiful, interesting, unexpected, and often surprising. These contain pictures cut from magazines, auction catalogs, books, and snapshots dating back to the ‘60s. 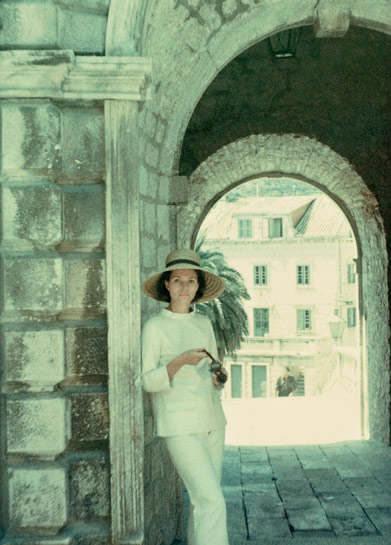 You grew up in Chicago, can you talk about your upbringing and memories of the Midwest?

My first recollection is from when I was about 3 or 4 and picking a lily from a Lincoln Park flower bed. Then a very angry policeman took me and the nanny home to my mother to make sure it would never happen again. To this day white lilies are among my favorite flowers.

I lived, if I remember correctly, at 3500 Lake Shore Drive, and also at 2440 Lake View Avenue. I attended the Convent of the Sacred Heart for 12 years. Among the special memories: the Saddle and Cycle Club and lots of tennis, Fortnightly club for dances, Racquet Club for debut party, reading to children at Children’s Memorial Hospital, and campaigning for JFK with Eunice Shriver and Rose Kennedy. The Shrivers lived next door, and I was great friends with their children going kite flying and horse riding in the park. There were frequent visits to the Art Institute of Chicago, and the huge pleasure of seeing the David Adler houses along the North Shore.

Were your parents influential in your affinity for aesthetics?

My parents loved traveling and took me on two great trips around the world. I left both early and went to Paris; I think nowhere in the world is there more imagination and attention paid to detail. Also, everything is made to order. I remember a pastry shop where whatever leaf you wanted could be made in the best chocolate. My parents adored restaurants and were very interested in food— which would be an important part of the trips. 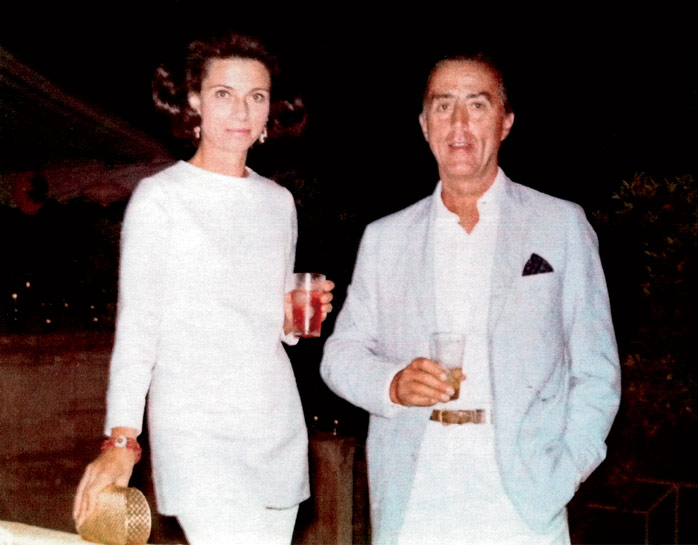 You’ve donated many of your couture pieces to museums over the years, but is it true that in retrospect you wish that you had kept many of them to wear today?

I was lucky, very lucky to shop for clothes in Paris, and I would rather have a few couture pieces to wear for years than many things.

Yes, I have given many to museums, and so many of the Balenciaga and Chanel I do wish I had back as the very colorful and complicated fashion of the moment is not for me. I had beautiful evening dresses in the past, but today’s life is very different.

How did your “look” for interiors and dress evolve with each of your residences?

Our homes in Washington, D.C. and New York were very different. In Washington, we had a rather large house. There was a dining room that could seat 24 and on the basement floor, there was a large office for Bill and an adjoining playroom for our son, William, that when the furniture was removed could seat as many as 90—which is what we did for the opening of the Kennedy Center. When we moved to New York, we were ready to give up anything resembling a large event. We changed the dining room into a library, and the living room has a table for six in the window looking out on the East River of Manhattan. The colors remain similar except in the living room, which is very pale bluegrey Venetian plaster. Many of the floors are painted white as they were in our home in Washington.

What I love about the book is the balance of sophistication and simplicity—and your creativity with flowers—almost like accessorizing an outfit!

I do like simplicity in both clothes and rooms. In clothes, I like very easy tailored coats, dresses, and suits that are classic and that I will want to wear for many, many years. I adore flowers and plants, and they are usually in unadorned baskets. 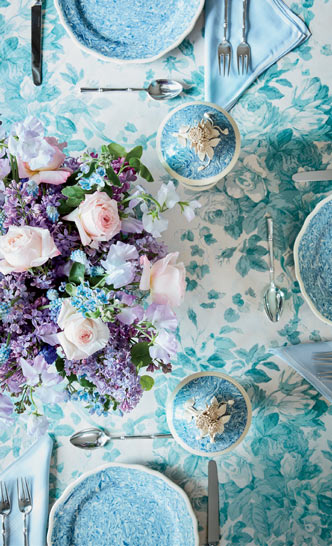 To me, your footprint is so distinctive and diverse, particularly in your contributions to the medical science field. Please talk about how the Deeda Blair Research Initiative for Disorders of the Brain at the Foundation for the National Institutes of Health began.

This occurred after meeting Mary Lasker. She was considered among the greatest advocates for all aspects of biomedical research and made a unique effort in the growth of the National Institutes of Health. I began to learn about cancer research when we left the Philippines and moved to Washington where I spent a great deal of time at the National Cancer Institute—where much of the early work in molecular biology was focused. Then, in the early 1980s, I began work at the Harvard School of Public Health and subsequently became deeply involved in their AIDS Research Programs for more than 20 years.

I had paid a great deal of attention to brain research for many years. After the death of our son, my husband and I began thinking about what we wanted our estate to support and concluded that what was most missing and needed were projects in the field of mental health.

The Deeda Blair Research Initiatives for Disorders of the Brain was conceived by me after being a member of the Board of Directors at the Foundation for the National Institute of Health. The mission of our research awards program is to identify and support the work of the next generation of researchers in neuroscience and psychiatry. Our program supports the taking of risks and developing creative, even disruptive, ideas to accelerate research in the causes, diagnosis, and treatment of severe mental illness.

We are giving awards to M.D.s and Ph.D.s who have already shown imagination, passion, focus, and vision in their residency programs. The past decades have seen unimaginable progress in basic research that remains highly dependent upon creative and committed individuals to implement. We gave three awards in 2021 and we are planning on four or five in 2022.

Deeda Blair: Food, Flowers, & Fantasy was written by Deeda Blair, edited by Deborah Needleman, with an introduction by Andrew Solomon and principal photography by Ngoc Minh Ngo. Copies are available at The Book Stall in Winnetka.