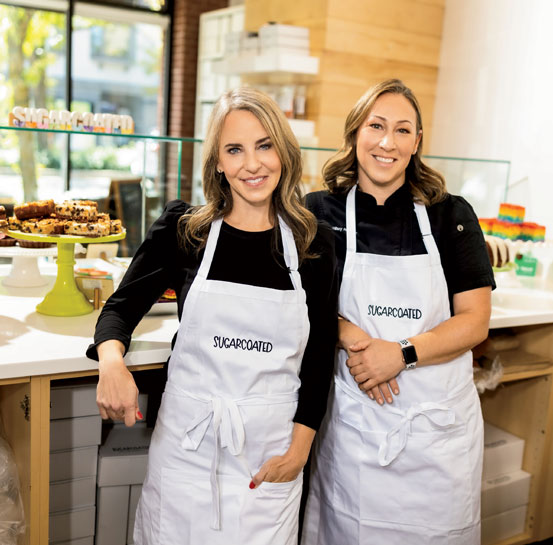 If there is one word to describe how co-owners Hillary Rikower and Allison Schachter feel since opening their modern bakery experience in Highland Park, it is grateful. For the first few days, Sugarcoated sold out within two hours.

“Never in a million years did we think we would end up in a space like this in a community that would embrace us so much,” Schachter says.

The women-owned co-op has been open since January 2022. The bakery strives for a clean and simple aesthetic, from the logo to the storefront to the premium quality ingredients they utilize in their products.

“We want it to be homestyle but still upscale,” Rikower says.

Sugarcoated has the same 10 to 15 handmade menu items, rotating in a few additional ones every day. The two women, who can be found in the bakery daily, are constantly creating new products and flavors—from rainbow cookies to key lime tarts to zucchini chai cake—and striving to make the best baked goods for their patrons.

The two women had crossed paths before they opened the doors of Sugarcoated but had never collaborated. Rikower, who went to Le Cordon Bleu, is a former pastry chef in fine dining restaurants and worked at some of Chicago’s top venues, like One Sixtyblue and Michael Jordan’s Steak House. Most recently, the Riverwoods native owned Sugar Hill by Hillary, focusing primarily on made-to-order cakes and cookies. Schachter, a former teacher and educational consultant, is self-taught. She owned Cookie Face, specializing in decorated cookies, and operated “Cooks and Books,” a culinary-themed enrichment class designed for preschool children.

Both Rikower and Schachter previously referred business to each other; if one received an order for something they would not be able to do, they forwarded it to the other. But it wasn’t until Schachter rented space in a commercial kitchen in 2021 to mass produce her cookie decorating kits that she began contemplating collaborative options. She knew other female bakers were working in a similar setting, and that’s when she started thinking about joining forces with Rikower, who she thought had compatible products.

Now, with over 25 years of combined industry experience, they have merged their expertise and similar aesthetics.

“The weather is starting to get cold and every parent wants their kid off Wi-Fi or electronics,” Schachter notes. “So, we do cookie houses and I’ve designed some for different holidays like Bubbe’s Bungalow for Hanukkah or the Claus Cabin for Christmas.”

Rikower and Schachter are often asked if they worry about local competition. Schachter replies, “there’s enough business for everyone to get a little bite of the action.”

The two women get particularly excited when they see their regular customers. One loyal customer comes every week for a brownie, from the center of the pan, for his 90-year-old father.

“I see him pull up and I’m like ‘get the brownie ready!’” Rikower laughs.

Other customers enter the bakery with a particular item in mind but may leave with a different tempting treat suggested by the women.

“A lot of people like the fact that they never know what they’re going to get,” Schachter says.