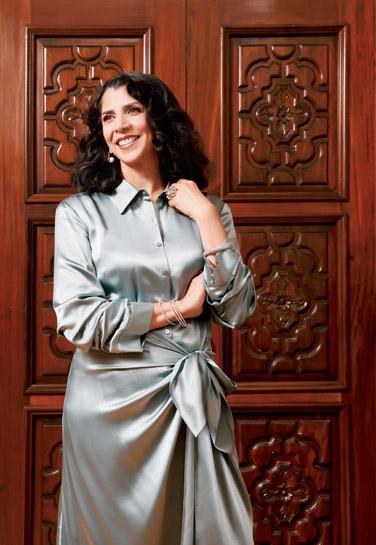 After working for more than 30 years in the field of physical therapy— as a clinician, a researcher, and a professor—longtime Highland Park resident Gayatri Mathur felt it was time for a career change.

She needed to do something, that would turn each of her rise-and-shine moments into an exercise in vitality.

“I wanted to be doing something that would make me jump out of bed every morning,” Mathur says.

Originally from Mumbai, Mathur found an ideal second career in 2018; since then, she has been soaring and seizing every waking moment of every day.

Mathur launched the nonprofit the Soondra Foundation and assumed the position of CEO four years ago. Based in Chicagoland, the Soondra Foundation fulfills its tagline of “Securing a Healthier India” by providing healthcare access through direct cash grants to India’s working poor when they have a medical emergency.

The numbers are staggering and, to Mathur, motivating: 300- 350 million workers in India earn between $3-$5 dollars per day, and some 65 million people in the second-most populous country experience poverty because of medical catastrophes.

“The Indian government takes care of people who make $2 or less per day, and those earning $10 or more each day are able to afford necessary medical treatment,” says Mathur. “But there are too many in the ‘unsweet’ spot who can’t afford medical care because the system in India requires patients to pay upfront.”

Crucial informal sector employees—from domestic helpers to rickshaw drivers to day laborers—in India’s economy are left to fend for themselves when they are in dire straits.

“Those in this demographic have to use their money for food, basic housing, and schooling for their children,” Mathur says. “There’s nothing left over after those necessities. What’s a family in that income bracket to do when a child or a spouse gets sick or injured?”

That’s when the Soondra Foundation enters the picture and serves as a safety net that, in many cases, saves the lives of grantees via immediate medical care. This plays a crucial role in preventing another financial catastrophe that could perpetuate intergenerational poverty. 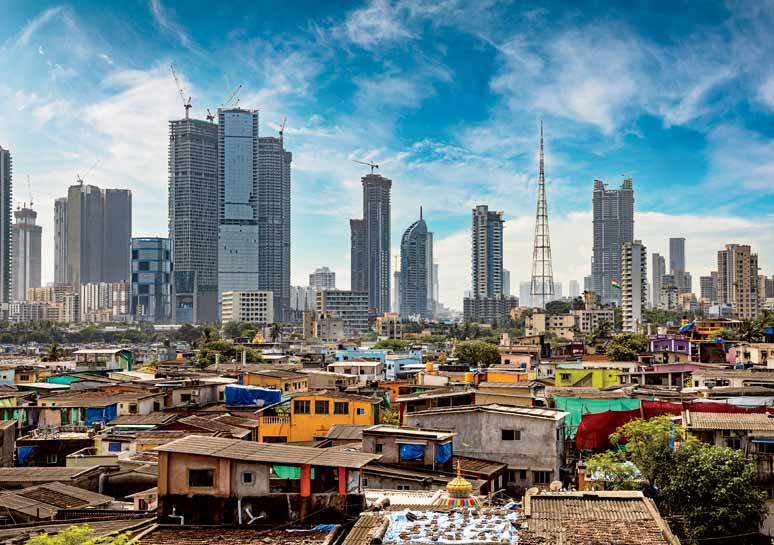 “Our efforts are focused not only on a grantee’s medical emergency but on their future as well,” Mathur says.

In one instance, a mother in India learned her daughter had a liver abscess but turned down the surgery because they couldn’t afford it. After the Soondra Foundation stepped in and eliminated the cost issue from the equation, the young girl successfully underwent surgery.

That girl wants to be a surgeon someday, a smiling Mathur reports.

“I’ll give you another example, one in which a $250 donation, or the approximate cost of a fancy bottle of wine, had a tremendous impact on a patient with blood cancer,” she says. “We were able to get the patient admitted to a hospital for lifesaving chemo and antibiotics. That simple step—admission to a hospital—triggered a social worker’s assistance and help from our foundation’s partnerships on the ground.”

“The Soondra Foundation,” Mathur adds, “gives vulnerable families who are trapped in a medical emergency a chance for a new lease on life. A small amount can make a huge difference.”

Mathur named the foundation in honor of her family’s beloved nanny, who became a second mother to a young Gayatri. Soondra, who died 25 years ago, warmed the household in Mumbai with her ever-sunny presence for more than 30 years.

“So loving, so dedicated, so funny,” Mathur says of “Saint” Soondra. “Very affectionate, with a ready smile, always joking, always laughing. She is the demographic our foundation wants to help; my Soondra faced poverty and destitution, but she took charge of her life.”

Their first date was at a McDonald’s. Each ordered a burger and fries. “India,” Mathur says, “didn’t have any McDonald’s restaurants at the time.”

A courtship ensued. They got married 34 years ago and raised two children, son Pranay and daughter Ishani, in Highland Park.

Mathur spent five years in Australia, working as a professor at the University of Sydney. Other stops in her physical therapy career included stints at Northwestern University and at the Shirley Ryan AbilityLab in Chicago.

Her leisure moments are occupied by reading or doing bonsai or birdwatching or walking along local trails with her yellow Lab Kaya or listening to classical Indian music or admiring the Chicago Botanic Garden. These moments are few because Mathur is laser-focused on the Soondra Foundation. 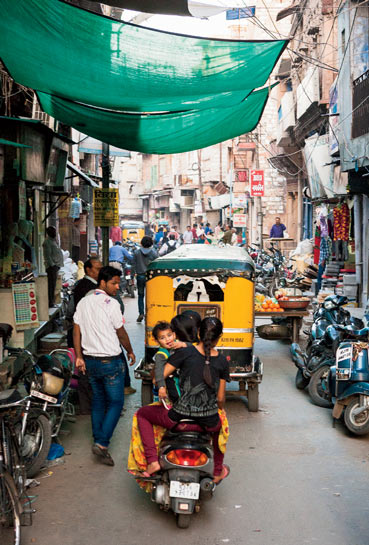 Streets of India. Photography by powerofforever

“We’re hoping to expand the foundation’s base,” Mathur says. “During the first year of the pandemic, not long after our first full year, we felt it was important for our targeted families in India to receive food rations, because in many cases, such as patients with tuberculosis, medicine doesn’t work without food.

It’s nighttime at the Mathur abode. Guess who can’t wait to wake up tomorrow?