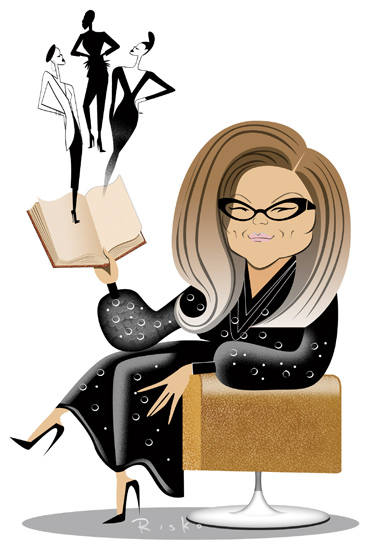 Fern Mallis is credited with the creation of New York Fashion Week (NYFW), the semi-annual pilgrimage where fashion designers debut their latest runway collections. The concept of consolidating shows into one location over a singular period where press, patrons, and the public could converge proved revolutionary in the industry. It was Mallis who first forged that path as Executive Director of the Council of Fashion Designers of America (CFDA), and later with IMG after the company purchased NYFW. When she left that post over a decade ago, the task of orchestrating another successful career may have seemed unnecessary and unlikely but Mallis has pursued it with gusto. “I’m most proud of my current reinvention and the next chapter,” says Mallis, now an author of two books, Fashion Lives: Fashion Icons with Fern Mallis, and its recently released sequel, Fashion Icons 2, published by Rizzoli and sponsored by Nordstrom. These feature a compilation of unscripted conversations with tastemakers and talents at her popular in-person and ongoing-running series at the 92nd Street Y in New York City. They are intimate, insightful, and inspiring. “There is no better moment than when one of my Fashion Icons starts a story with ‘I’ve never told this to anyone before.’”

In high school in Brooklyn, New York, Mallis was voted “best dressed” for what she describes as her eclectic look. Both of her parents were strong style influences. She frequently accompanied her father to work in the Garment District where he sold scarves. “I loved going to work with him and watching him in action,” recalls Mallis, “the way he had a joke at the ready, he hosted lavish lunches with buyers, and just witnessing the business of sales was exhilarating.” Her mother was also creative and chic. “She was crafty in more of a Martha Stewart sort of way, and I remember her in beautiful evening dresses and a big white fox stole for dancing at the Copacabana.” In college at the University of Buffalo, Mallis pursued liberal arts, and in her senior year won a contest for a Guest Editor spot at Mademoiselle magazine. A job with the publication followed, then a role as Fashion Director at Gimbels East, the first department store on Manhattan’s Upper East Side, before she went on to open Fern Mallis Public Relations.

“To my friends and colleagues, I was like Google before it existed! So, I decided to make a business out of it,” laughs Mallis. She shared an office with the architects behind Studio 54, a trendy location for her firm’s focus on representing and launching fashion and design showrooms. “I used to travel to Chicago for NeoCon and spend lots of time at The Merchandise Mart for the trade events.” It was good training for when she was hired by CFDA, the association of American fashion and accessories designers. The opportunity to develop NYFW not only earned Mallis accolades, but it gave her the behind-the-scenes exposure to the perspectives that now fill the pages of her books.

Artists, photographers, models, make-up mavens, and more reveal much of what was previously concealed. While Fashion Icons 2 has an international roster, from Italy’s couturier Valentino and the Missoni family to the United Kingdom’s former Spice Girl turned entrepreneur, Victoria Beckham, and Dame Zandra Rhodes, Fashion Lives focused on the major figures in the American fashion scene. From Iris Apfel, age 101, sharing a century of tales of the textile empire she built with her late husband, Carl, to Project Runway’s host and alum Christian Siriano, the youngest guest to date, each exchange between Mallis and her subjects is rare and rewarding, and definitely not one-size-fits-all.

“With the evolution of digital and social media, fashion is 24/7, it’s everywhere,” notes Mallis, as she prepares for her next duo in the set, Fashion Icons books 3 and 4. What makes a Fashion Icon? “My definition has remained the same since the series’ inception—it’s not about tenure. Fashion Icons highlights the individuals in the industry that have made their impact not only through their unique design aesthetics but a thought-provoking brand purpose,” says Mallis. As the Library of Congress has a copy of each of her books in its holdings, clearly Mallis has made an imprint on fashion history.

Learn more about Fern Mallis by following her on Instagram @FernMallis.