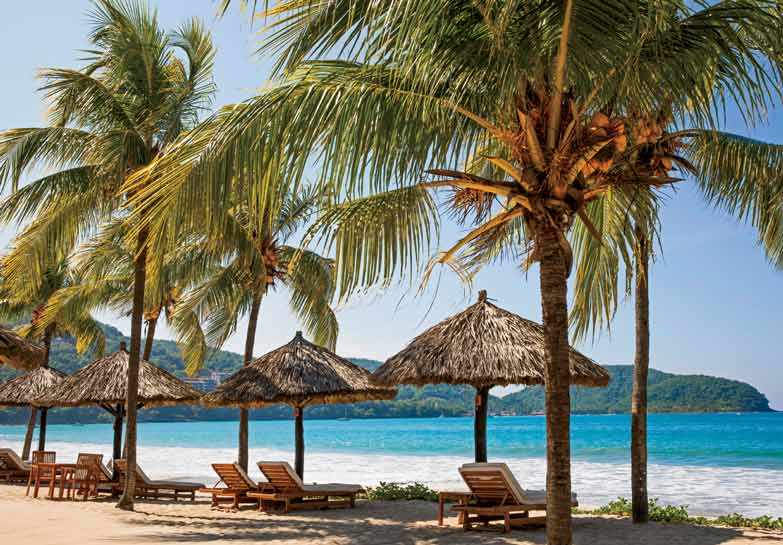 Framed by jungled cliffs and a magical ocean, Mexico’s Zihuatanejo offers beautiful beaches, spectacular sunsets, a vibrant central market, picturesque streets, and friendly residents. The area has long drawn celebrity visitors like Andy Warhol and Mick Jagger, and the Oscar-nominated film The Shawshank Redemption introduced many to this once sleepy fishing village. Fortunately, Zihuatanejo retains much of its original character. Its charming narrow cobblestone streets are home to authentic restaurants, boutiques, and artisan studios, where one might find “Amate” paintings—vibrant scenes painted by native artisans on canvas fashioned from tree bark. 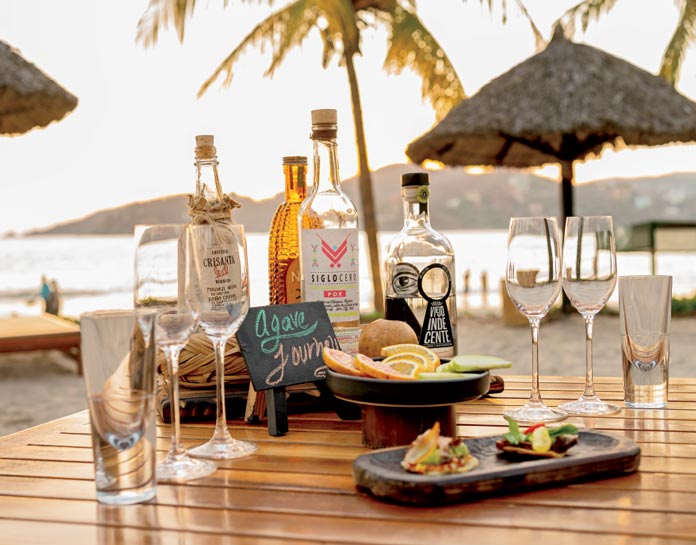 Nestled in the hills just a quick drive from the city center is the Thompson Zihuatanejo. This luxury boutique hotel sits along the sands of the famous Playa La Ropa located in a bay of the Pacific Ocean. The 56-suite property thoughtfully blends the award-winning brand’s signature mid-century modern aesthetic with traditional Mexican architecture and handcrafted touches by local artisans. From its open-air restaurants featuring ingredients sourced from the surrounding region and rich culinary programming on-site to a series of turquoise pools and an intimate spa, the Thompson Zihuatanejo is a hidden gem where cultural sophistication blends beautifully with beachfront relaxation. 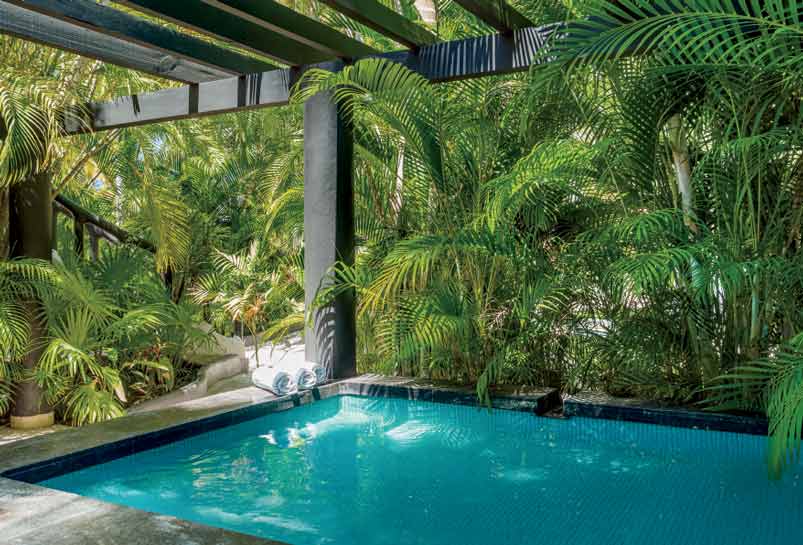 Each suite has a private entrance under a palapa-topped adobe structure. My suite’s open-floor plan consisted of a living room/ work area that flowed into a large bedroom outfitted with gorgeous modern oversized furnishings. Two sets of French doors opened onto a palm-shaded enclave boasting several seating areas and a sapphire-tiled plunge pool. This area would be a favorite during my stay. Reclining on my chaise, I listened to the ocean and birdsong while watching the palm fronds dance in the breeze. Whenever I felt a touch overheated, I stepped into the pool’s cool water slightly disturbing the bougainvillea petals floating on its surface. 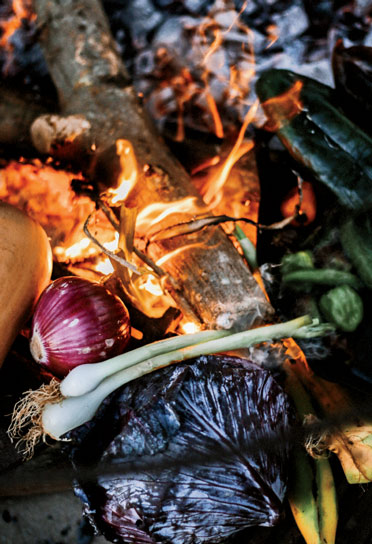 Guided by the Thompson Zihuatanejo’s Chef Javier Garcia Cerrillo (“Chef ”), we did a deep dive into the region’s rich culinary history. Chef ’s love for food and respect for its origin, along with his world view comes through in every bite—his passion is palpable. Before settling in Zihuatanejo, Chef lived all over the world and spent five years at a Michelin-starred restaurant in Spain. Through his travels, he learned that fire is a universal element; it flavors food and feeds souls in every corner of the planet. Thus, he incorporates open fire cooking as much as possible. As his profession is one of the few to nourish customers’ bodies, Chef focuses intently on an ingredient’s quality and provenance. All ingredients in his kitchen are sourced regionally and much is grown in the hotel’s garden. 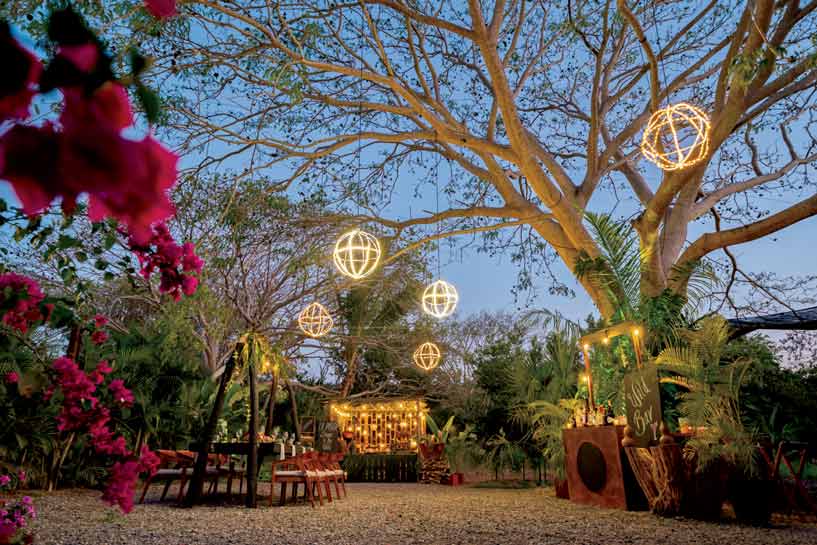 Our culinary deep dive began with a trip to Zihuatanejo’s fish market. With Chef as our guide, we visited the lively morning market full of an amazing array of fish glistening in the sunlight with well-fed feline fans lounging about on discarded nets. We chose a 45-pound tuna—Chef instructed us how to determine the freshness of the fish—clear eyes, firm to the touch, and retaining a scent of the sea. Our selection received top scores in each category. Back on the property, we ventured to the beach where the staff had erected a beautiful outdoor kitchen. Chef demonstrated his carving skills as he taught us how to properly slice the tuna— sharing that the belly (otoro and chutoro) offers the highest quality sushi. Our station also had an open fire grill where Chef prepared a snapper stuffed with sprigs of rosemary and slices of orange and wrapped in a palm frond. A spiny lobster grilled with a squeeze of lemon completed the seafood trifecta. A local variety that is mostly black with bright red long spines, this lobster was unlike any I had ever seen. With toes in the sand and sun on our shoulders, we dined on our pescatarian meal—the embodiment of “fresh food.” The meal culminated in a sweet treat dubbed an “obscene and kinky chocolate cake.” Topped with M&M’s and pretzels, it was an exquisite combination of sweet and salty. 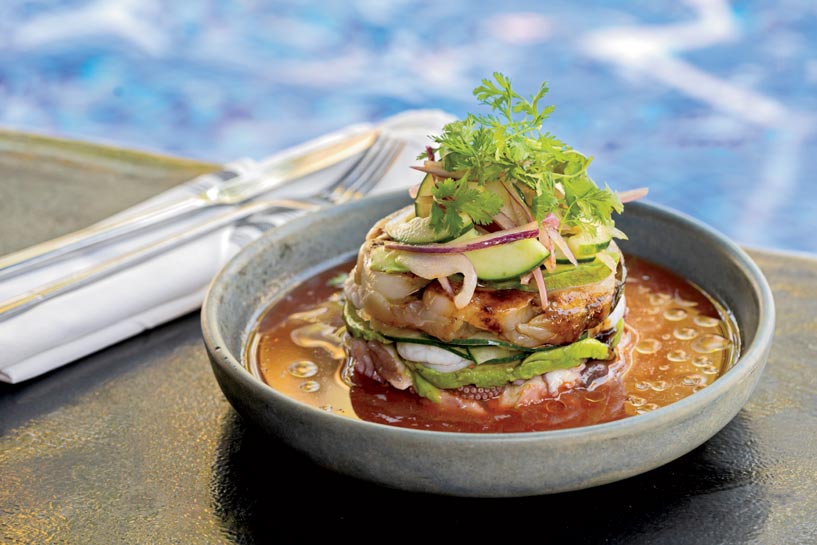 Our next culinary adventure—a special “HUMO” family-style experience—required the staff to construct an elaborate six-foot structure on the beach where Chef hung a variety of meats and vegetables to roast over an open fire for five or more hours. This long, slow roasting process materialized in a delectably juicy meal served alongside herb-infused tequila cocktails. The feast included pork ribs with chimichurri, short ribs with bone marrow and dark rub crust and dark beer au jus, Picanha (a cut of beef first made popular in Brazil) with a roast garlic crust, and Hang Chicken with pasilla pepper and pineapple sauce. We savored each fire-kissed bite against the backdrop of the Sierra Madre mountains, a tangerine sunset, and a nocturnal concert compliments of the ocean’s waves. 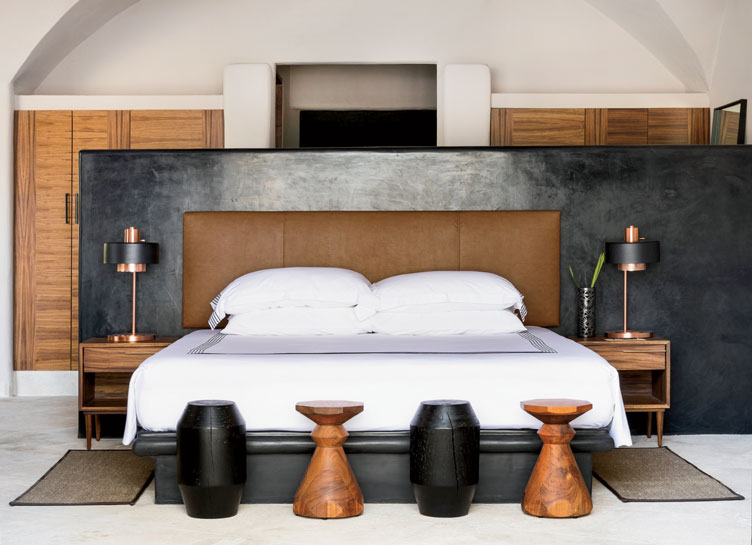 My absolute favorite culinary escapade was “La Parota, Dinner in the Wild.” Guided away from the ocean to the edge of the property, we entered a jungle landscape through a torch-lit pathway. Emerging from the walkway we discovered an elaborate outdoor kitchen, the “Wild Bar” serving a variety of tequila concoctions, and a beautifully set table beneath an arbor crowned with branches, palms, and flowers. A lush setting for the remarkable five-course meal that followed. The first course contained white fish and tangerines in a base derived from an ancient Mayan recipe. Argentinian street food inspired the second course—an empanada served alongside an iron skillet containing Choripan (Argentine sausage), Provoleta cheese, and something that resembled an American hotdog but tasted out of this world. The third course highlighted Tikin Xik, a white fish that was coated with mixed ashes and fire-roasted. The fourth course introduced a dry-aged ribeye accompanied by a bone marrow esquite with roasted cauliflower puree and an ash mole with demi-glace and blue cheese. The fifth and final course consisted of beautifully potted chocolate “trees” imaginatively presented in the hollow of a large branch. I felt almost ashamed to eat such a delicate creation but after the first bite, I recovered from my hesitation and consumed every last bit. Divine—both in design and taste. 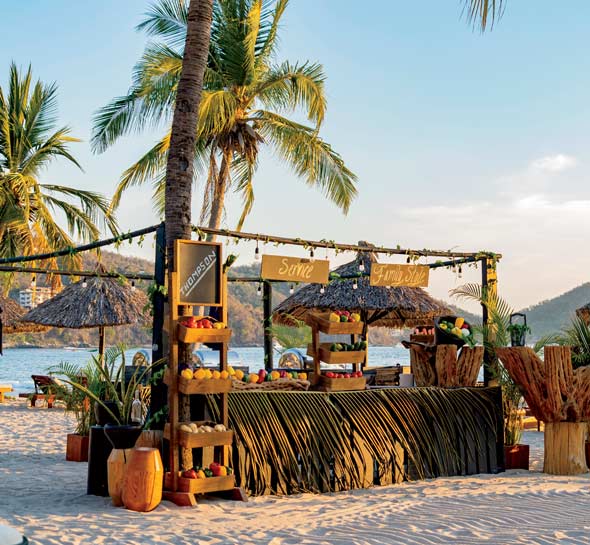 HUMO-style dinner on the beach

As we were in Mexico, an agave journey was a must. One evening, we tasted several tequilas while our mixologist described the varying colors, origins, and flavors of each. The tasting took place next to an immense Oscar Torres mural the hotel commissioned as part of its “Culture Lives Here” campaign, which supports local artists and educates guests about provincial customs. 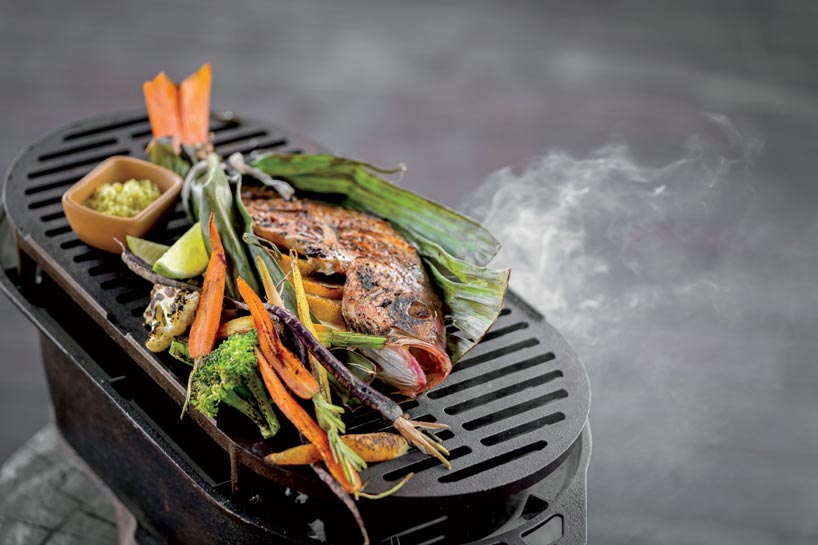 Rosemary and orange stuffed snapper served at the beach

Looking for an intoxicating getaway brimming with culture and cuisine? This Pacific Coast destination is the perfect escape for the traveler who seeks the experience of extraordinary meals in extraordinary settings. Beyond the sun, sand, and surf, awaits a foodie’s dream vacation. Buen provencho! 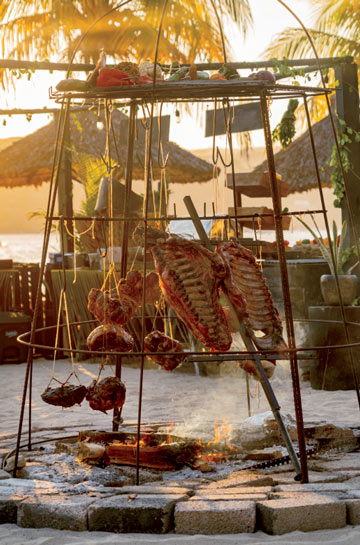 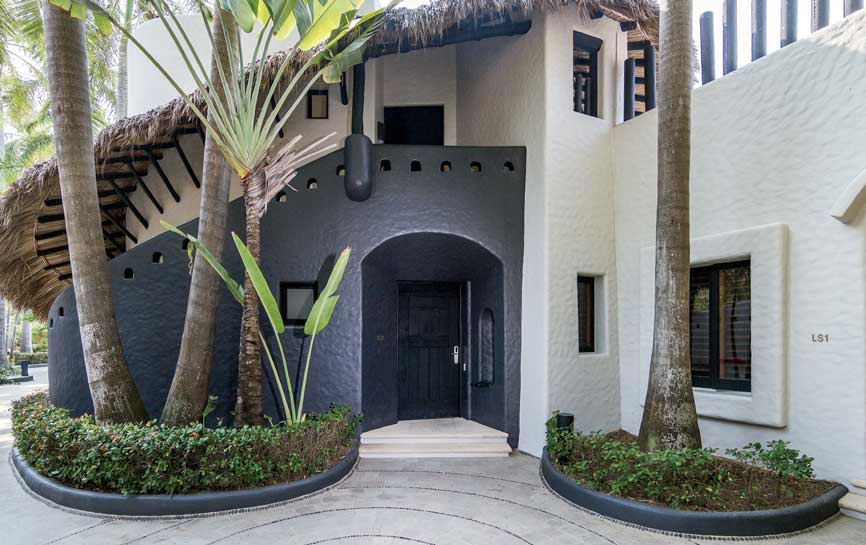