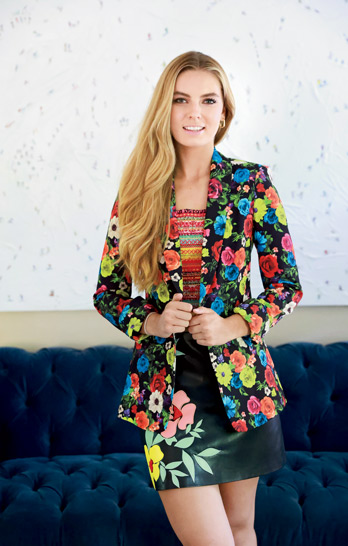 For New Trier High School senior Ava Summers, the summer of 2022 was a pivotal one.

The 17-year-old spent four weeks in our nation’s capital, serving as a U.S. Senate Page—the only representative from Illinois—with 30 other students hailing from across the country.

The pages play an integral role in the daily operations of the Senate, performing duties such as delivering documents to offices, preparing desks for presentations, and recording when senators enter the Senate floor during a vote. Summers most enjoyed having the opportunity to speak with senators.

“After one of my favorite senators finished speaking, I approached him to ask if he wanted a copy of his speech,” she says. “I then had the honor of talking to him before taking his speech. These moments were so special because not only did I get to speak with the senators, but I also got to hold their original speeches with all of their handwritten notes before delivering them to wherever they needed to go.”

The history of the page program is a long-held tradition in the Senate, starting with the first appointment in 1829 of a nine-yearold boy. Today, pages are still appointed by a Senator and must be a high school junior, at least sixteen years old, and enrolled in school.

Summers went through the lengthy application process in February of her junior year—sending her resume, transcript, four essays, and three letters of recommendation to the office of Oklahoma Senator James Inhofe (R-OK). In April, she received her acceptance into the program.

“I was on a flight coming back from spring break when I found out,” she says. “I was so excited.”

She was hopeful the experience would provide her with a first-hand understanding of the polarization between political parties and help her to see if the media was portraying politics in a realistic way or if there was much under the surface that went unseen by the public.

“Many times, the media illuminates only those instances where the Senate is heavily split or fiercely debating different issues. They don’t show that the Senate members often work together to produce bills that create change,” she explains. “I like politics a lot more now because I know that it’s not all just split. There’s a lot of teamwork that goes on behind the scenes.”

“I was really surprised because we were able to meet and take photos with both of them and have a little conversation too,” she says. “That was one of the highlights.”

Summers, who would recommend the program to anyone remotely interested in politics, will bring her expertise to her AP U.S. Government and Politics class at New Trier this year as well as to college next year, where she is considering a major in political science. And perhaps, a future summer will see her return to Capitol Hill as a congressional intern.