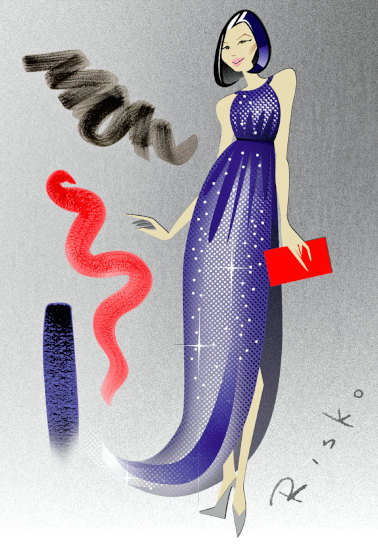 Journalist Alina Cho’s reporting has come in all different shapes, sizes, and styles. She has hosted fashion news for CNN, reported on CBS Sunday Morning with a segment on Sting and Trudie Styler’s villa in Italy, regularly takes the stage at The Metropolitan Museum of Art for her designer conversation series, The Atelier with Alina Cho, and writes a weekly lifestyle blog, “Cho & Tell.” Her Emmy and Peabody award-winning career spans from on-the-ground coverage of hurricanes and presidential elections, to behind-the-scenes insights into retail and runways. “Fashion is the second largest business after Wall Street in New York, an industry that brings billions of dollars into the economy, so why shouldn’t we be talking about it more seriously?” inquires Cho.

Her parents, from Seoul, Korea, met as exchange students in the 1960s in the United States, married, and settled in Vancouver, Washington, where Cho was born and raised. She describes her mother as her best friend and credits her savvy in mixing high and low brands with Cho’s early fashion education. “When she was pregnant with my younger sister, instead of maternity clothes my mom wore a Diane von Furstenberg wrap dress,” recalls Cho, “she’s my No. 1 style icon.” That concept of individuality and creativity served as a model for Cho in her approach to work and life.

Her interest in journalism began with a high school speech class. “My teacher approached me after I had given a presentation and said that I was a really good public speaker,” recalls Cho. That confidence boost, coupled with a passion for writing, led her to Boston College and a major in Communications. “I wanted a city experience and fell in love with the campus,” she says and admits to not really knowing what television news was about until interning at local stations. “I made friends with the anchors—I’d go out in the field, do whatever they needed, and wrote their scripts.” Others took notice and offers came in post-graduation, both for a full-time job and a fellowship, and soon followed an acceptance to the Medill School of Journalism at Northwestern University.

“At the time, my parents were insistent that I take the opportunity for an advanced degree, telling me that it would set my credentials apart,” says Cho. “To this day, potential bosses will single out that MA on my resume!” She thrived during her time at Northwestern, residing downtown at McClurg Court, running the lakefront prior to participating in the Chicago marathon, and then working as a reporter for Chicagoland Television (CLTV). “Everything snowballed from that moment on,” shares Cho, of her initial experience that planted the seed for her talent to blossom.

She soon landed in her current base of New York City, with prime spots at CNBC, ABC News, and, in 2004, at CNN. It was at the latter where she learned how to pitch ideas ranging from personal and political to popular culture. She received special permission from the North Korean government to report on the New York Philharmonic’s performance in Pyongyang in 2008 and was invited back in 2010 for the announcement of Kim Jong-un’s leadership. These were emotional and deeply meaningful visits given that Cho’s parents were survivors of the Korean War.

In 2013, Cho took a short break from the nonstop news grind and became Editor-at-Large of Ballantine Bantam Dell, a division of Penguin Random House. She has since published on various topics including memoirs by fashion designers Tommy Hilfiger and Donna Karan, a cookbook by Jessica Seinfeld, and a collection of comedic essays by Jill Kargman. When she missed being on-air, she reached out to a former colleague, a producer at CBS Sunday Morning, and arranged a test audition. A piece on British fashion designer Stella McCartney was well received, and since 2017, Cho has been a contributor to the weekly program. In addition, Cho is currently serving as producer on an upcoming Netflix documentary about Martha Stewart.

“It’s a hustle,” she says, “but I’m a Type A personality and I love to tell stories.” While Cho does not rule out a return to Chicago if the right opportunity comes along, wherever she roams it is with a firm hold on the advice a news director gave her long ago. “Always have one to three interesting details and a takeaway.” It’s a lesson she applies in person, in prose, and in her signature practice. She seeks to look beyond the surface, in form and in fashion.