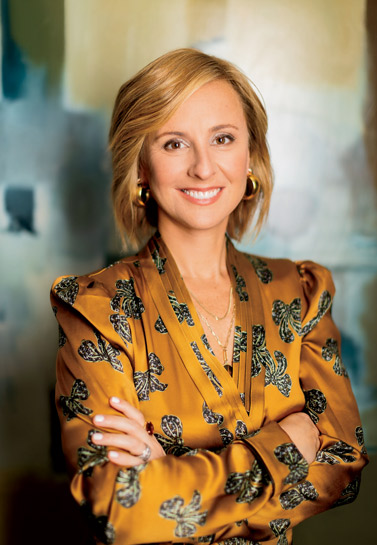 The television news anchor in Aimée Eichelberger still pulsates—18 years after she left the broadcast industry.

Now a Wilmette resident, mother of three, and public relations maven, Eichelberger, 42, sits at a table in Winnetka’s Hometown Coffee & Juice on a rainy afternoon. It’s dreary gray outside but San Diego sunny inside, thanks mostly to Eichelberger’s animated countenance as she begins to tell another engaging story to a rapt audience of one.

Her eyes dance. Her smile widens. Her voice is pitch-perfect, every third or fourth word receiving the inflection treatment.

“My third-grade teacher at Range Line Elementary (in Mequon, Wisconsin), Miss Coleman, was fond of the arts, all of them,” recalls Eichelberger, who founded Superior Public Relations, Inc., in 2013, serves as its CEO, and now thrives as an off-camera storyteller for grateful clients. “Miss Coleman encouraged me to write, to create stories, and I loved everything about the process. Still do. I can see her, hear her. She inspired me. I auditioned for a role in The Sound of Music because of Miss Coleman. You don’t forget a teacher like that,” she explains.

Years later Eichelberger became news editor of The Highlander, Homestead High School’s newspaper, and interned for the NBC-TV affiliate in Milwaukee—her first of several unforgettable internships in broadcast media first as a high school student and later as a University of Wisconsin-Madison (UW) journalism major. Others included camerawork on the set of the public television show Sewing with Nancy and producer duties with CBS News in New York, where she worked with The Early Show host Gretchen Carlson, who would serve as a host on Fox News’s Fox & Friends from 2005 to 2013.

Eichelberger earned her first dollar in the industry in Missoula, Montana, after landing the position of general assignment reporter following her graduation from UW. A year later she returned to Wisconsin for a two-year stint as a weekday reporter/weekend news anchor in La Crosse. Her three-part series on homelessness in the western Wisconsin city enlightened folks.

“It also surprised many,” Eichelberger says. “They had no idea how extensive homelessness was in La Crosse.”

A tragic story about the deaths of a mother’s two daughters in a house fire precipitated Eichelberger’s exit from the news game at the age of 24.

“The ‘if it bleeds, it leads’ way of thinking in news programming upset me,” Eichelberger admits. “I was told to ask the mother questions, on-air, that would provoke the most emotional responses from her. I just didn’t feel right, didn’t feel comfortable, doing that sort of interviewing.” 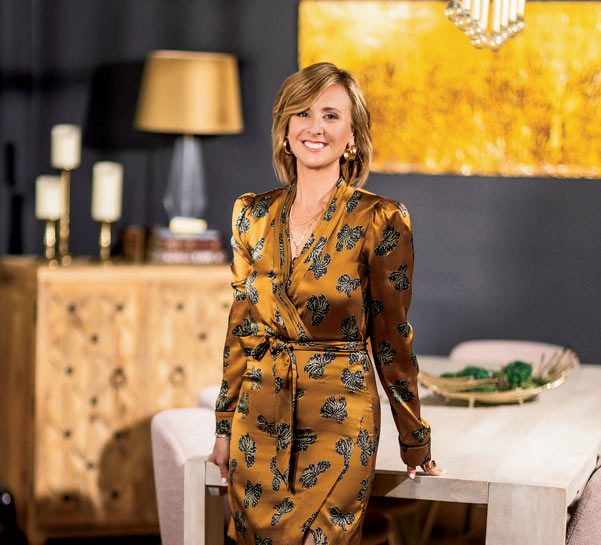 Eichelberger is a fourth-generation small business owner— daughter of Rick (former CEO of a successful manufacturing business based in Franklin, Wisconsin) and Renee Balsley. Eichelberger credits her father for inspiring her to take the leap into entrepreneurship and says he is an ongoing mentor for her.

After her time in broadcast in Wisconsin, Eichelberger moved to Charleston, South Carolina, to be near her future husband, North Shore native and former UW hockey star John Eichelberger, who, in 2000, had been drafted in the seventh round by the Philadelphia Flyers and was playing for a minor league team in the Palmetto State.

After injuries derailed John’s promising professional hockey career, the couple headed west to relocate to California and start new vocations. But Eichelberger got an early jump on her second career—somewhere in Colorado.

“John was driving as I was looking at my phone,” she recounts. “I turned to him and said, ‘Guess what? I just got a job offer from a PR firm in San Francisco.’”

She took it. Eichelberger represented tech start-ups, initially as an account executive and ultimately as a vice-president during an impactful four-year tenure. Confident and fearless, she was a natural in PR and found success on Day One, maybe in Hour One. The rookie’s number of media hits, right off the bat, impressed her superiors.

Eichelberger summoned the storyteller in her, not having to dig deep. The narrator was still eager, still sharp, still vibrant.

“What I loved about PR then, and still love about it now, was getting the opportunities to tell companies’ stories,” Eichelberger says. “Storytelling—my favorite part of working in news—is such a huge part of public relations. You find something compelling about a client and then present it clearly in a way that will help the company grow and achieve success as a result of increased buzz and brand awareness.”

She aced other PR gigs before she and John got married in 2007. It was a destination wedding, with a twist—most of their guests didn’t have to travel far for the nuptials, while the couple flew from California to Wisconsin to become Mr. and Mrs. They now have three children: Clara, 11; Etta, 9; and Bobby, 7, a center in hockey like his father. Dad Eichelberger is one of Bobby’s Wilmette Jr. Trevians Hockey coaches.

Eichelberger was Superior PR’s lone employee (the firm’s solopreneur) for the first four to five years; she now oversees a team of 10, with 14 tech start-ups as clients.

Superior PR delivers a full suite of services to help businesses develop their stories and effectively communicate them to the marketplace. Superior PR bills itself as “fearless, creative, and as agile as the companies it represents.”

“I’m big on work-life balance, and I practice what I preach,” says Eichelberger, who ran the 400-meter dash for the Homestead High School track team and now jogs and works out regularly. “I tell my staff, ‘Remember, this is PR, not ER.’ Everyone works hard and from home, but there’s more to life than what you do for a living. So much more. It’s truly fun for me, to raise my children. I’ve told my employees, ‘Go to your kid’s soccer game.’”

That approach appealed to Superior PR Account Director Allison Stecko when she was hired a little more than a year ago.

“Aimée has a great attitude about everything,” says Stecko, a Winnetka native and 1998 New Trier High School graduate. “She has never had an ‘off ’ day. She’s on, always on. What also impresses me about Aimée is her ability to look over tons of information— sometimes complicated info—organize it, and then make it readable for a mainstream audience.”

“Aimée,” Stecko adds, “is incredibly smart, a fantastic writer, and I know her background as a newscaster benefits our clients greatly. She truly works hard and efficiently to see to it that our start-ups get to that all-important next step.” Sounds like this second chapter is bound to have a happy ending.