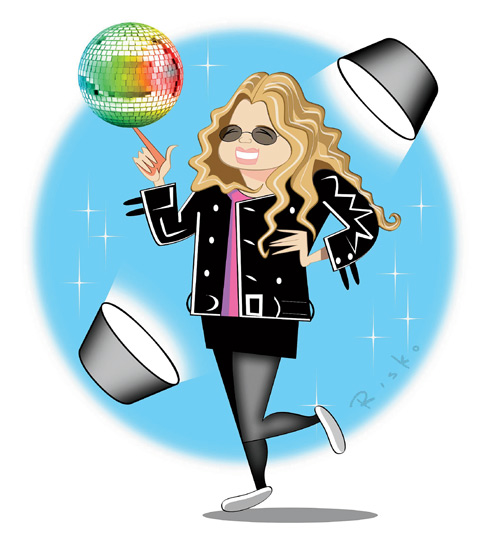 Sometimes being in the right place at the right time can be life-changing. Woodlands Academy alum Lauren McClusky would most definitely agree.

McClusky’s life-changing moment occurred as a high school sophomore during a visit to her father’s office. McClusky’s dad, Jeff, is the founder and CEO of Jeff McClusky & Associates (JMA)—one of the country’s largest comprehensive entertainment promotion and artist exposure companies.

“My dad was advising an upand- coming high school band called The Days,” McClusky recalls. “We all began talking about the possibility of us working together on an event that would bring high schoolers together to raise money for a charitable cause.”

The project became a collaborative effort spearheaded by Mc- Clusky, with volunteers from several Chicago- area high schools who would meet weekly leading up to the event.

Deciding on a charity was easy because McClusky’s family had long been involved with Special Olympics Illinois. Her father sits on the board, and the entire family volunteers in the group’s music initiatives, entertainment events, and fundraising efforts around the world.

Each year since 2007 (with the exception of 2020 due to COVID-19), McClusky has produced Nelarusky, the Official Aftershow of Lollapalooza—Chicago’s largest summer music festival. To date, the event has raised more than $450,000 for Special Olympics.

“Nelarusky is just the letters of my name all mixed up,” says McClusky with a laugh. The event showcases both local and national acts through an annual benefit concert at Metro, the iconic Chicago concert hall.

The first two Nelarusky events (then called McFest) featured bands from local Chicago high schools and drew more than 800 students on a Sunday afternoon. Today, Nelarusky has grown to encompass nationally known bands like Imagine Dragons, Alabama Shakes, Omar Apollo, Cold War Kids, Kali Uchis, and many other artists playing to sold-out crowds of 1,150 attendees. The event often sells out within minutes after the tickets go on sale. This year, Nelarusky will take place on July 26.

At press time, the bands for this year’s show had not been announced. “Staying true to our roots, we always feature a Chicago act as our opener. And our remaining performers never disappoint. It takes a lot to produce this event in addition to my full-time job, but it’s such a passion project and generates so much excitement for Special Olympics—I can’t imagine not doing it,” shares McClusky, who now resides in Nashville and currently works in Music Brand Partnerships at United Talent Agency.

“The whole event is absolutely amazing, but the real magic is when we present the check to the Special Olympics Global Messengers,” says McClusky. “I always get so nervous to get on stage in front of a big crowd, but you can feel the support that people have for this organization and standing with the global messengers takes all of my nerves away.”

For more information, visit facebook.com/Nelarusky, or to make a donation, visit soill.donordrive.com/event/nelarusky22.