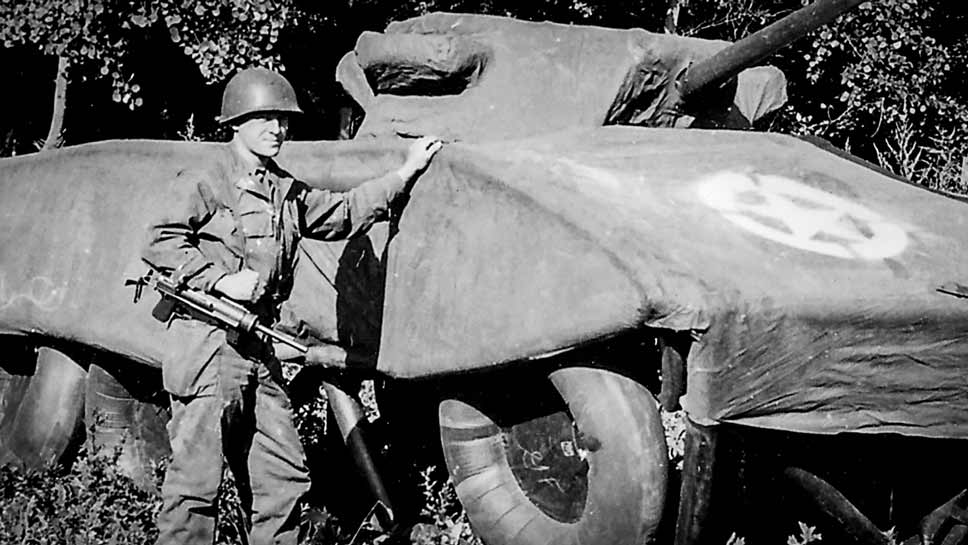 When most people are asked to define the military, their answers often include descriptions of marching soldiers or rumbling tanks. But few include stories about the Ghost Army—a covert unit of talented artists who were carefully selected and, in some cases, hand-picked for their specialized skill set.

“The Ghost Army helped the United States military use creativity and imaginative thinking to win against the enemy— Nazi tyranny,” says Arielle Weininger, Chief Curator of Collections and Exhibitions at the Illinois Holocaust Museum & Education Center. “The Ghost Army exhibit shows that there was an important place for artists in the military. It really took an artistic mind to come up with such an effective level of deception.” 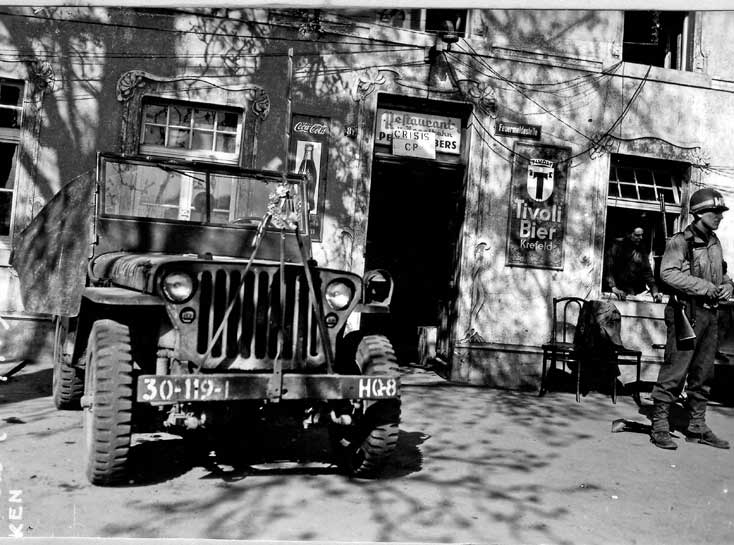 Phony Headquarters for the 119th Regiment of the 30th Division, in Dulken Germany, during Operation Viersen, 1945; National Archives

Ghost Army: The Combat Con Artists of World War II, a largescale, in-depth exhibit opens at the Illinois Holocaust Museum & Education Center on June 16 and was created by the National World War II Museum in New Orleans. The exhibit tells the heroic tale of the top-secret U.S. Army’s 23rd Headquarters Special Troops, known as the Ghost Army, and their secretive operations across Europe. Armed with nothing heavier than .50 caliber machine guns, this carefully selected group of artists, engineers, professional soldiers, and draftees—the first mobile, multimedia, tactical deception unit in U.S. Army history—saved thousands of lives and played an important part in the Allied victory by impersonating other Allied Army units to deceive the enemy. 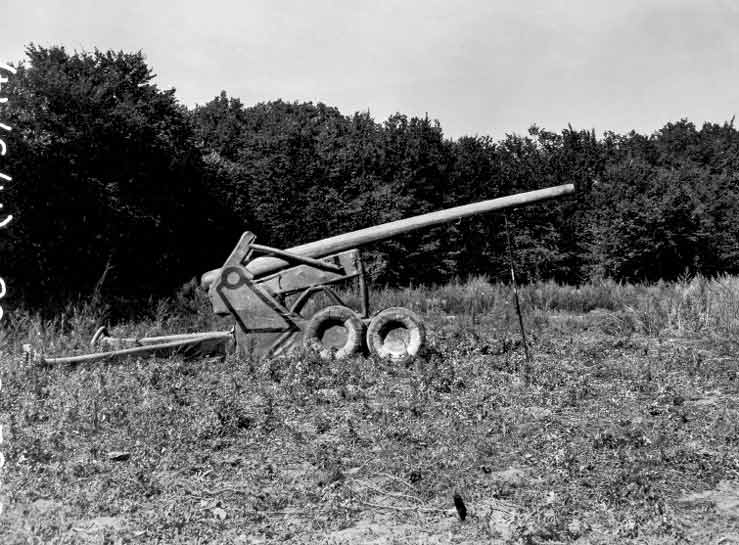 Consisting of 82 officers and 1,023 men, this top-secret unit was capable of simulating two whole divisions (approximately 30,000 men) and used inflatable rubber tanks and vehicles, fake radio traffic, sound effects, and even phony generals to fool German forces during the war’s final year. “It’s incredible to see a lifesized reproduction of one of the inflatable tanks used to fool the enemy from the air,” Weininger explains. “Soldiers could literally lift it up with their fingertips.” 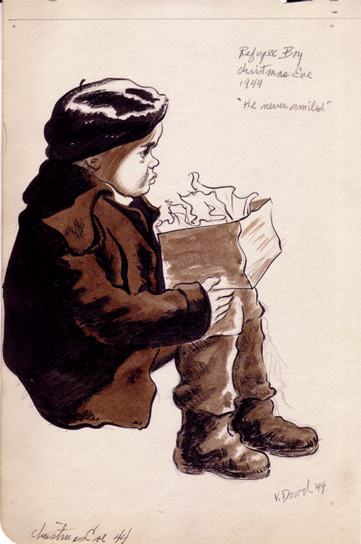 At Christmastime, Ghost Army soldiers threw a party for refugee children. Victor Dowd sketched one boy who no-one seemed able to cheer up. “He Never Smiled,” Dowd called his sketch. “God knows what he had been through.”; Victor Dowd Collection

The exhibition details the 22 large-scale deceptions launched by the Ghost Army from Normandy to the Rhine River between D-Day and the war’s end. Featured artifacts include artwork, uniforms, inflatable tanks and planes, as well as text panels detailing unit operations, profiles of unit officers, archival photography, and sketches that educate visitors on these unlikely heroes. Fashion designer Bill Blass, rock ‘n roll photographer Art Kane, and prolific painter Ellsworth Kelly are among the notable creatives who were a part of this special operation. 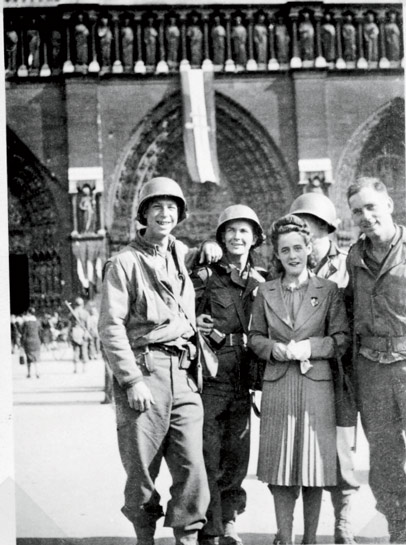 Tales of the Ghost Army have been largely untold because files detailing this unit remained classified until the mid-1990s. “It was just this past February that President Biden signed a bill awarding the Congressional Gold Medal to this secretive unit,” says Weininger. “The Ghost Army has only just been officially recognized for their contribution to ending the war.”

According to Weininger, the artwork left behind by the Ghost Army is one of the exhibit’s most beautiful surprises.

“The artwork is especially wonderful,” she explains. “There are watercolors and drawings of the different places where these artists ventured throughout Germany and the people they encountered along the way. There is this special series of portraiture done of the people they were protecting in the displaced persons’ camps.”

Within the Illinois Holocaust Museum’s exhibit of the Ghost Army will be four Ghost Army veterans from Illinois (there are only nine living veterans from this unit in the United States). One of these veterans, 98-year-old Bernie Bluestein of Schaumberg, is attending the exhibit’s opening on June 16. Before the unit began using inflatable tanks, Bluestein would paint on cloth draped over wooden tank frames. Rick Beyer, author of the book Ghost Army—on which the exhibit is based—will also be in attendance and will interview Bluestein about his experience. 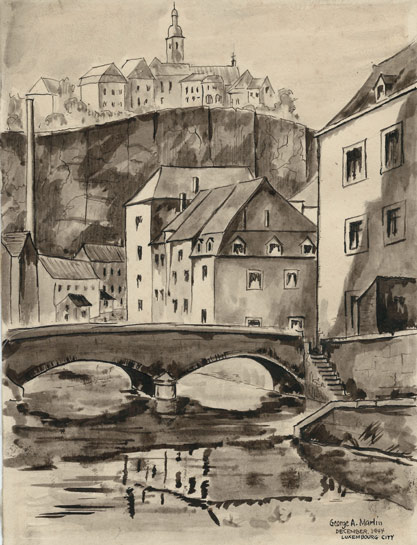 “Bernie is incredibly enthusiastic to be part of this event and so supportive of this exhibit,” says Weininger. “I can’t wait for visitors to hear his story.”

Ghost Army: The Combat Con Artists of World War II is one example of the Illinois Holocaust Museum’s commitment to exhibits that will appeal to all members of a family and provide an experience they can enjoy together.

“The more people we can draw into our museum,” adds Weininger, “the more access points we have for sharing the story of the Holocaust’s legacy.”

Ghost Army: The Combat Con Artists of World War II will be open from June 16 through January 2, 2023. For more information and to purchase tickets, visit ilholocaustmuseum.org.