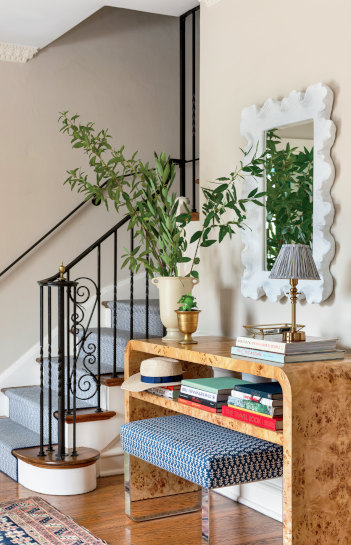 There is liking the color eggplant and then there is living with it painted floor to ceiling. Those who can fearlessly make such a selection for their living space are designer Alexandra Kaehler’s kind of people.

Just such an adventurous couple found their way to Kaehler in late 2020 to help them reimagine their traditional 1940s Hubbard Woods home.

“This is one of the real beauties of social media,” says Kaehler with a laugh. “When my clients reached out to me about their home redesign, they already had a pretty good idea of my aesthetic. While I can always work with any client on any type of design they have in mind, it’s so much fun to work with people who trust the process and are ready to just go for it.” 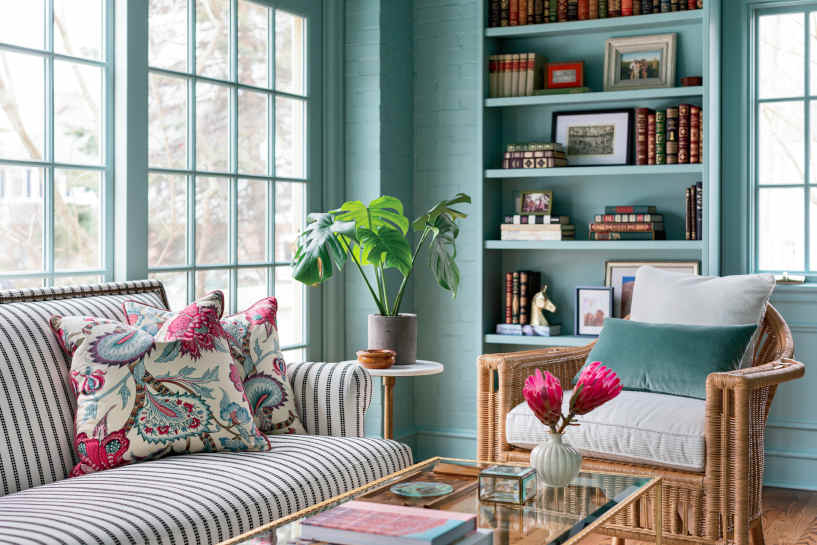 By the time the husband and wife had their first meeting with Kaehler, they had a very thoughtful and specific inspiration to share.

“We were channeling our inner Wes Anderson to create an unexpected, cohesive design,” Kaehler says of the American filmmaker whose movies are known for their eccentricity and unique visual styles. “The clients were looking to make their home feel bold and whimsical—to take their old home and freshen it with color. They weren’t worried about playing it safe and that made it so much fun.” 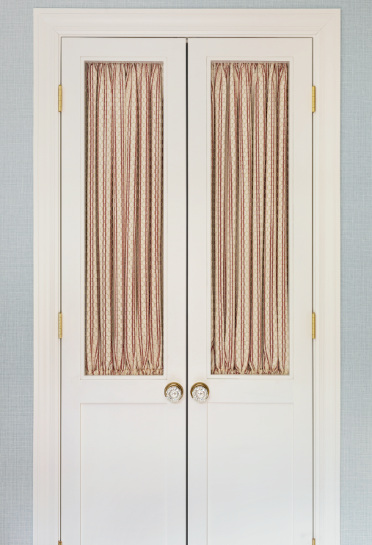 The home had beautiful bones that had been well-preserved with details like traditional molding that framed most of its rooms. “My clients asked me to help them embrace these more traditional architectural elements but asked for my help in making them a little funky,” she explains. “They knew how much I loved color and pattern and the way these could play off of each other.”

Kaehler turned to her favorite tool for making a dramatic impact—paint.

“Clients are always surprised by how much drama paint alone can create,” Kaehler explains. “When we were looking at painting the sunroom, we took the color from floor to ceiling—including the beautiful moldings. Keeping the moldings white just didn’t make sense in this space anymore.” 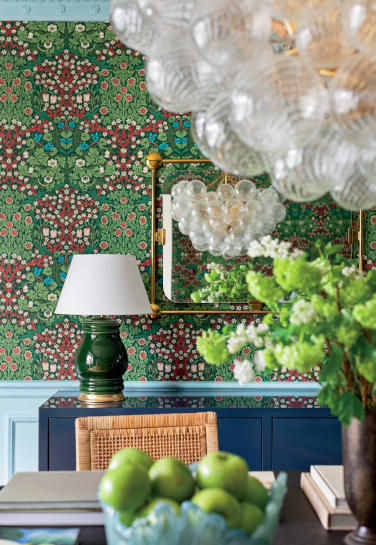 And when Kaehler speaks of paint color, while she has done her fair share of projects using many of the neutral colors that are popular of late, it was a palette of soft turquoise blues and you guessed it—eggplant—that she pulled from her toolbox for this project.

“Remember, it’s Wes Anderson and whimsy that we were using as our inspiration points. We also had this deep, rich forest green-patterned wallpaper from William Morris that had been installed in the dining room right before we started working together,” she says.

“It was a great jumping-off point for us.” The only challenge in using such saturated colors in an older home was applying them to old plaster walls. “It took a little finesse, but the final result is magic.” 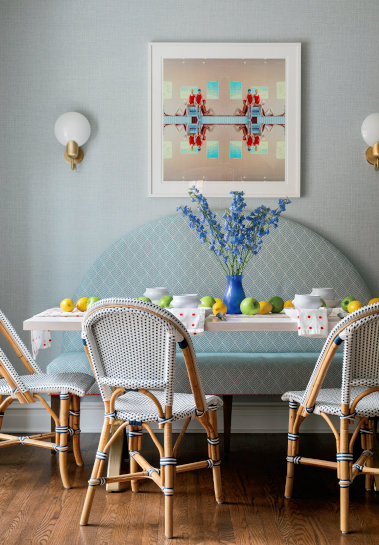 Kaehler continued the kaleidoscope of patterns seen in the dining room wallpaper into the kitchen, creating a banquette seating area that was both practical and a work of art in itself.

“When I talked with the homeowners about the seating in the kitchen, I explained that having a typical round table and chairs centered in the room wouldn’t give them the flexibility that a banquette might. It also gave us the opportunity to make this a focal point in the space.”

Kaehler’s team ran with this idea, creating a custom upholstered half-circle banquette, with a blue-and-white herringbone patterned fabric that is finished with a bright red fabric that you can only see hints of when you’re looking at it straight on. A white rectangular table and four blue-and-white Serena & Lily chairs finish the space.

“I think my favorite part of this vignette is the artwork above the banquette,” Kaehler says. “I’m really not a person who loves red, but I was so attracted to how the red and turquoise played off each other in this print. The clients agreed that it was just perfect in this space.”

Flanking the art piece, are two circular-shaped, retro-looking white and brushed gold sconces. These light fixtures also pick up on the circle pattern introduced in the dining room wallpaper.

And while this kitchen eating area is a showstopper, it’s also practical for the homeowner’s young family. “The soft blue grasscloth-looking wallpaper is actually vinyl,” she says. “It’s very pretty but easy to clean.”

In addition to warming up the bright new white kitchen cabinetry with vinyl wallpaper, Kaehler’s team replaced a barn door that was disguising the kitchen’s pantry with one that would have been true to homes in the 1940s.

“I love this door so much,” Kaehler adds. “We draped the window of it with a red and white stripe fabric, and it makes such a statement behind the gold filigree in the glass.”

While Kaehler selected nearly every color and furnishing throughout the home’s first floor, it was the last piece she chose that she calls her favorite.

“The dining room chandelier was the very last piece we selected,” she says. “I’m not sure why it took so long, but it was definitely worth the wait. It has this modern playful feel to it, but somehow also feels timeless. It’s so special, so whimsical—it captures this home perfectly.”