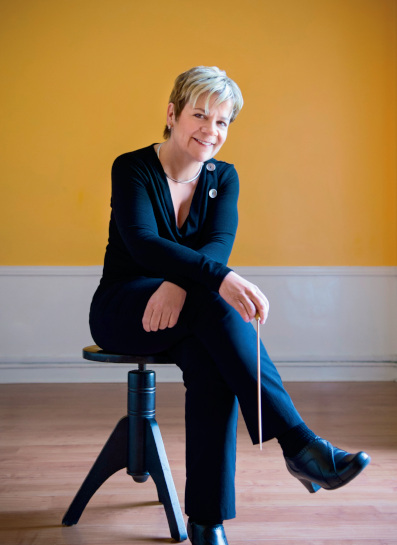 Alsop—a New York native, a lifelong violinist, Music Director Laureate of the Baltimore Symphony Orchestra, and the Ravinia Festival Chief Conductor since 2020—has proceeded to break barrier after barrier in the classical music world.

“First of all, Marin is incredibly articulate and passionate about music. Her journey to becoming a conductor is an inspirational one,” observes Ravinia Festival President and CEO Jeff Haydon, a California native who, before assuming the helm at Ravinia Festival in September 2020, held executive positions at the Ojai Music Festival and Caramoor Center for Music and the Arts.

This summer Alsop, in partnership with Haydon, adds another first to her biography: Ravinia Festival’s inaugural Breaking Barriers festival, which celebrates the diverse artists and leaders at the forefront of classical music today and in the future.

Scheduled for July 29 to 31 and featuring the Chicago Symphony Orchestra (CSO) at the iconic venue in Highland Park, this year’s festival focuses on women conductors. The celebration includes three main-stage concerts with wrap-around programming and events each day, such as roundtable discussions, master classes, symposia, and a film screening of The Conductor, a documentary chronicling Alsop’s achievement of her childhood dream of conducting.

Alsop curates and leads three weeks of programs with the CSO each summer, including the festival’s annual fundraising gala concert, and will work closely with Ravinia’s Reach Teach Play education programs to inspire young Chicagoland musicians.

One of Alsop’s early heroes and mentors was Leonard Bernstein, the first American-born conductor to lead a major American symphony orchestra. Through his music, he canonized the female voice. Fittingly, the CSO will perform Bernstein’s Symphony No. 3: Kaddish on day two of Breaking Barriers.

Another mentor, Tomio Taki, played a vital role in Alsop’s early career by underwriting the Concordia Orchestra; an orchestra Alsop formed when she realized she would have to create her own conducting opportunities. “For conducting, unless you have 40 people come over to your house every day to play, you can’t ever practice,” explained Alsop in a 2015 interview. “So, you can’t ever get experience because no one will let you conduct because you didn’t conduct before.”

Alsop honored this pivotal relationship when she created the Taki Alsop Fellowship, which mentors, supports, and promotes women conductors as they advance in their professional careers.

“It’s time,” Haydon says, “to spotlight females and recognize their significant contributions as conductors, and we’re excited to do that this summer at Ravinia Festival.”

“People are ready to get out and visit us. Time spent at Ravinia Festival—it’s certainly something we all could use now,” explains Haydon.