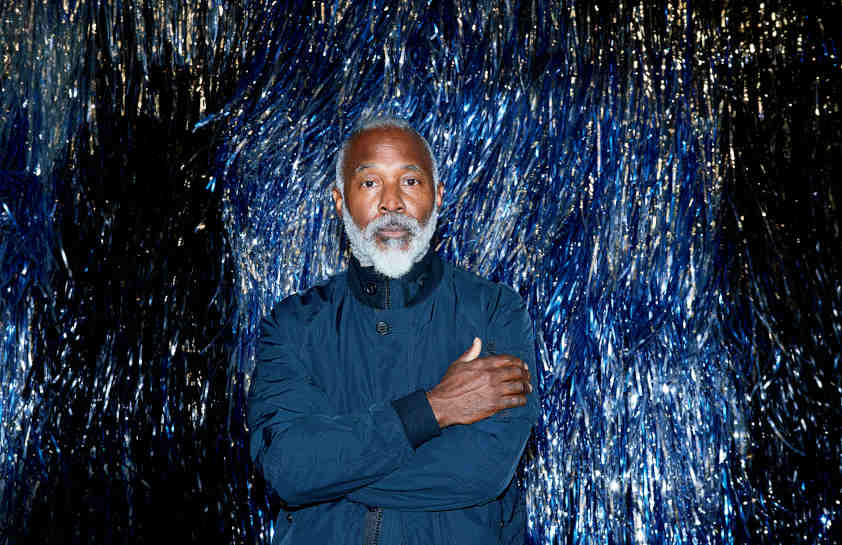 This spring the Museum of Contemporary Art (MCA) Chicago exhibits Nick Cave: Forothermore, the first retrospective to be presented on the artist’s work. Looking back, however, has always been a familiar practice for Cave. The difference now, as he points out, “is that I’m no longer restricted by worrying about what I am making and how it will be received.” The show features pieces from as early as 1989 and others never before seen. 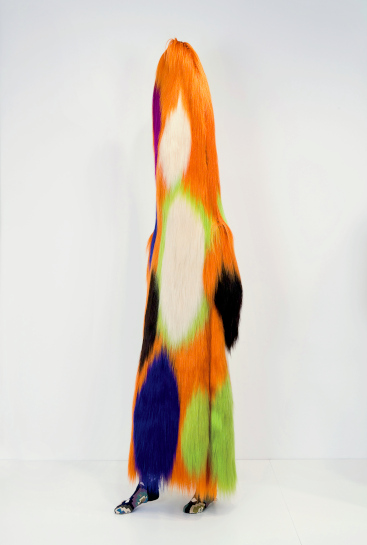 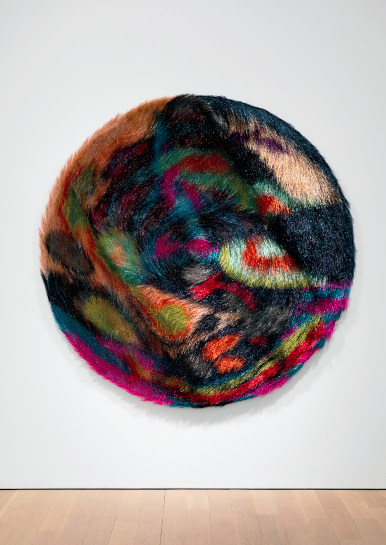 Cave arrived in Chicago in 1990 to accept a teaching position at the School of the Art Institute of Chicago (SAIC), where he still resides as the Stephanie and Bill Sick Professor of Fashion, Body, and Garment. “I don’t like to think of myself as having a singular home,” shares Cave, who is originally from Missouri, and one of seven sons raised by a single mother. “All she wanted was for me to go out and get a secure job, with insurance,” laughs Cave, “but to my mother’s credit, she never discouraged me from pursuing my dreams.” She would rave about her son’s birthday and holiday card creations, as would his aunts and uncles, all part of the close-knit family Cave grew up around. The encouragement gave him confidence. He would often re-fabricate his older siblings’ hand-me-downs. “Of course, my brothers would joke with me about the way I dressed in high school,” recalls Cave, “that was the Soul Train era, and trust me, I knew that I was the one who looked cool!” 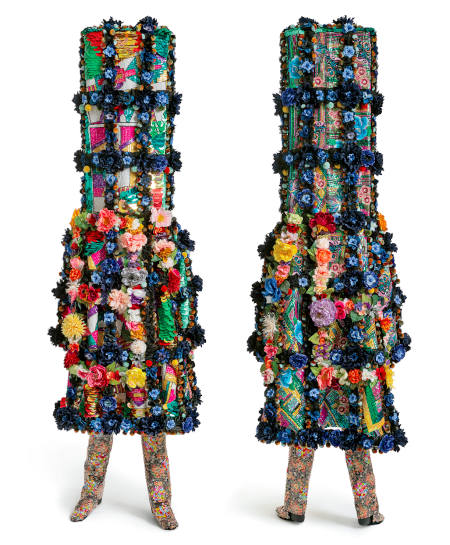 04 Nick Cave Soundsuit 8:46 (front and back), 2021 Mixed media including vintage textile and sequined appliqués, metal and mannequin 102 x 29 x 29 in. Courtesy of the artist and Jack Shainman Gallery, New York 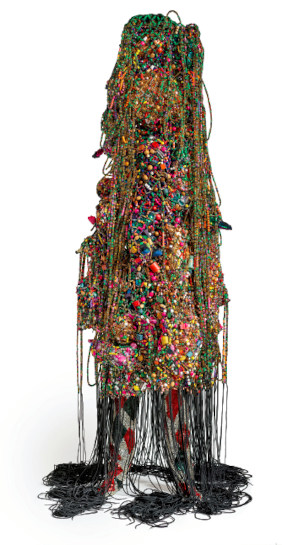 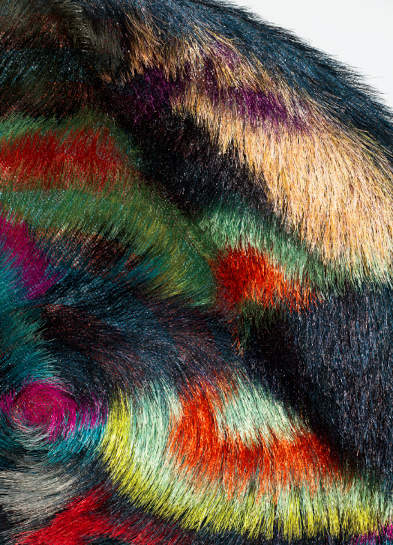 Cave completed his undergraduate studies at Kansas City Art Institute, an experience he describes as providing “a really safe space for me.” He wanted to head to New York City, but after graduating he took a position with Hallmark to support himself and pay the bills. “My mother was so happy until I told her that I had decided on graduate school.” Cave received a Ford Foundation Scholarship to Cranbrook Academy of Art, located in the Michigan suburbs near Detroit. “I walked onto campus and for the first time ever, truly, I felt that I was a minority—the only Black student in the class.” Rather than despair, he directed his emotions toward his work. “I think I needed that challenge of looking at my peers and then reflecting on myself in order to find balance in my art.” Following his Master of Fine Arts, and while simultaneously teaching at the SAIC, Cave fulfilled his desire for design output by opening a store, Robave. There, for nearly a decade, he sold his own private label of clothes for men and women as well as distributed to major retail venues such as Bergdorf Goodman. 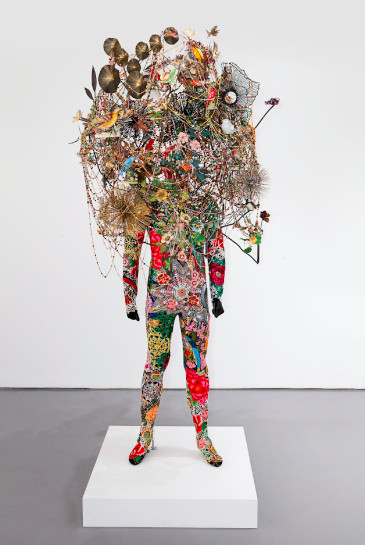 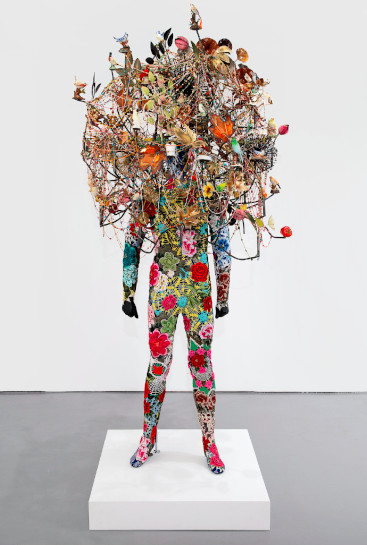 In 1991, his career found its permanence in the history of contemporary art. When he learned of the beating of Rodney King and the riots in Los Angeles, Cave turned his desire for activism into his art. Recalling the feelings of tension and the racial divide in communities, he comments, “nobody knew what to say, especially at work, myself included.” He built a life-size sculpture, Soundsuit, that makes a distinctive noise with the movement of its wearer and has since followed it with other similar forms using elaborate mixed media in a myriad of colors—vibrant and visibly strong like the armor they portray. “They are my interpretation of a shield, my performance, and my protest.”

In 2020, with the news of George Floyd’s death, Cave again was feeling reactive and a need to be proactive. Together with his partner, Bob Faust, a creative director and the designer of the accompanying Forothermore exhibition catalog, the pair transformed their multidisciplinary space, known as Facility and located in the Irving Park neighborhood of Chicago, into a community platform. It was their joint project, Amends, that invited people of all ages to detail their reflections, good, bad, and even apologetic, on handwritten letters that were then displayed on Facility’s exterior windows. 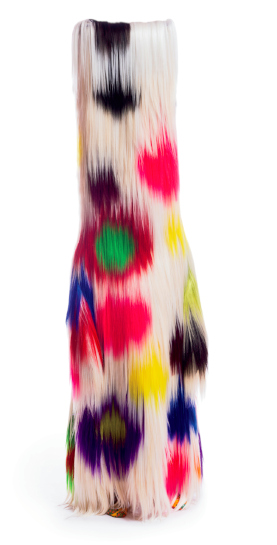 Now, as the MCA is set to reveal what Cave likes to refer to as a solo “survey” of his oeuvre, he is prepared for the discourse. In fact, he welcomes it. Spinner Forest will hang metallic mobiles on two separate floors for a multi-level display. Other galleries explore innovative installations through sound and a 14-channel video, cast bronze shapes and figures, and a special homage dedicated to Cave’s grandparents. Curated by Naomi Beckwith, former MCA Manilow Senior Curator and now Deputy Director and Jennifer and David Stockman Chief Curator of the Solomon R. Guggenheim Museum where Forothermore travels next, the show is intended to be inclusive of patrons within and beyond the MCA confines.

Accompanying the ArtEdge gala event will be a premiere of Cave’s The Color Is, offering original fashions, dance, and music by LaBelle hosted at the DuSable Museum of African American History. Additional venues involve a video projection across the entire south facade of the Merchandise Mart, part of the Art on the Mart series. Joining Cave to share in the experience will be his mother and an entourage of family members, including his brother Jack, The Color Is collaborator, and fellow SAIC lecturer. “Years ago they all came to see my exhibition at the Chicago Cultural Center, and suddenly everyone started to cry,” reminisces Cave. “They said ‘we now get it, we see the struggles to the success;’ they were so proud.” This emotional and moving tribute to Cave, like Forothermore, is a testament to work that powerfully speaks to messages of the moment, both past and present.