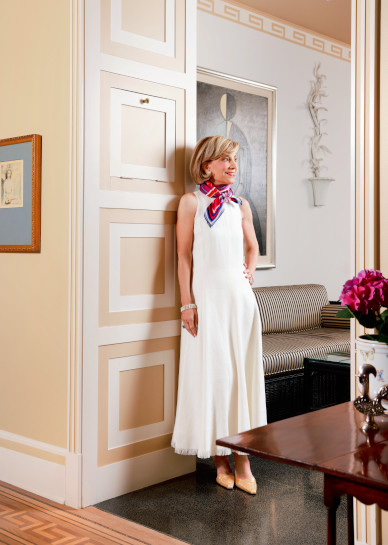 Highland Park’s Betsey Pinkert first heard French at four years old in ballet class, and it was a coup de foudre, a love-at-first-sight-like attraction to the sound of the language that would inspire the rest of her life. She’d later convince her parents to send her to France for her summers during high school, where she studied French and enrolled at the Alliance Française for immersion.

What she didn’t realize at the time is that years later, in 1974, she’d join the Chicago chapter of the Alliance Française and spend the next 48 years serving in a variety of prominent roles—from Director of French Programs and President of the Woman’s Board to tour leader of the historic Voyage Extraordinaire (a weeklong trip to Paris for members of the Board of Directors) and Vice President of the Board of Directors.

“I had been teaching French at Evanston High School and the Latin School of Chicago but left when I became pregnant,” says Pinkert. “I knew I had to do something to maintain my French, and the Alliance was in my neighborhood. I walked through those doors and found a community of like-minded people and, in a sense, I never walked out.”

Founded in 1897, the Alliance Française de Chicago is a 125-year-old nonprofit organization that is part of an international network of over 800 Alliance cultural centers worldwide. With a mission to promote exchange, understanding, and friendship between Americans and all French-speaking people, the Alliance is Chicago’s epicenter of French language and cultures.

Dubbed “the place for all things French,” the Alliance offers more than 60 cultural events a year, all aimed to underline Chicago’s love affair with French culture. Think programming ranging from an online series on the Grands Châteaux of the Loire and Ile de France to a screening of The Last Metro with special guests Gérard Depardieu and Jeanne Gang, who presented in French about her award-winning architecture.

The Alliance has hosted other notable guests in Chicago, like Pierre Balmain, Hubert de Givenchy, Sean Connery, and even Audrey Hepburn. And the school of the Alliance also offers more than 70 classes every eight weeks for both kids and adults on topics ranging from Marcel Proust to Netflix’s Emily in Paris series.

“We offer wine tastings, cooking classes, French language classes, film series, book clubs, and even yoga classes,” says Pinkert. “When I first started, the audience was made up of people who were fluent in French but then the decision was made to open the Alliance to the city of Chicago. Now, we truly have something for everyone.”

Many events are hosted in the Brown Médiathéque, the largest privately-owned French library in the Midwest with over 18,000 items. Others are in the salon and board room, designed by École Boulle in Paris. The link between the Alliance’s two buildings is inspired by La Maison de Verre, the Art Deco masterpiece in Paris.

The Alliance annually awards a McCormick Award for Excellence scholarship—established in the memory of Chicago philanthropist Roger McCormick—to two laureates who are chosen from among several finalists who earned top scores on the National French Context exam.

Available to students in the Chicago and North Shore areas, the scholarship is one committed to the cultural exchange between France and the United States, with recipients receiving a trip to Paris for the month of July during which time they live in the heart of the city and study at the Sorbonne.

Separate from the scholarship program, the Alliance has since 1998 partnered with Chicago Public Schools to offer 60 motivated students from underserved neighborhoods a two-year after-school enrichment and immersion program. Ninety percent of the participating students go onto college, often as the first in their family to do so, and students have been accepted at institutions like Harvard and MIT.

“At the end of the program, students are eligible for a trip to France the summer after their graduation,” says Pinkert. “We hope it inspires them to continue learning French throughout their college careers.”

On May 7, the Alliance will celebrate its 125th anniversary at its biennial gala, 125 Le Bal, hosted at the Four Seasons Chicago by the Alliance Française de Chicago Woman’s Board. Co-chairs Elisabeth Adams and Gail Hoffman will bring the allure of Francophone culture into the spotlight with sumptuous French-inspired cuisine and French wines, along with music, dancing, and a live auction. The goal? To raise a minimum of $400,000 as key operating funds for education, language immersion programs for high school students from Chicago’s core neighborhoods, and cultural offerings at the Alliance.

“Le Bal will have all the earmarks of an Alliance Française gala, which means it will have superb gourmet food, incredible wine, and be beyond elegant, as all French galas are,” says Pinkert.

The benefit will honor Catharine Hamilton in recognition of her many years of dedication to French culture and the Alliance, and the Prix de l’Alliance Française de Chicago will be awarded to long-time champion of the Alliance, Myriam Bransfield.

Pinkert herself was decorated by the French government at the recommendation of President Macron of France in 2019 as a Chevalier de l’Ordre national du Mérite for her years of promotion of the French language and culture. She calls it “one of the most memorable days” of her life.

“As I look back on these years, I can see the incredible transformation and evolution of the Alliance as a cultural resource in the city,” says Pinkert. “My admiration only continues to grow.”

For more information about Alliance Française de Chicago and the gala, visit af-chicago.org.