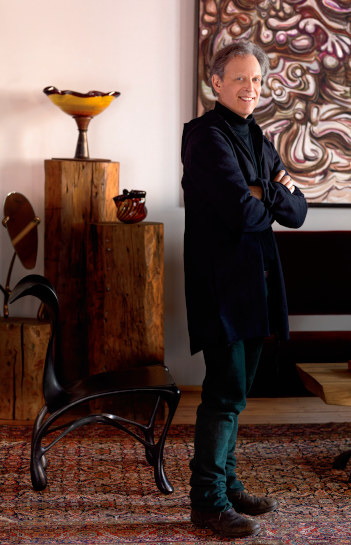 Jordan Mozer perches on a stool by his drafting table, head down and eyes focused as he sketches in the soft morning light. The table behind him is strewn with design-project flotsam for a house in Bangkok, restaurant consultations in Germany, and the Love in the ChromaZone work for his Annette and Dale Schuh Visiting Artist exhibitions this month at the University of Wisconsin. Stone samples, fabric swatches, schematic plans, and building models vie for space with piles of watercolor imaginings.

Beyond that, the space housing Jordan Mozer & Associates’ (JMA) architecture and design firm soars to open-beamed heights. Sculptures, paintings, settees and sofas, tables, chairs, lamps, and whimsical whats-its are situated throughout—harmonious groupings of the signature work that once prompted the international design community to dub Mozer “Chicago’s other Jordan.” 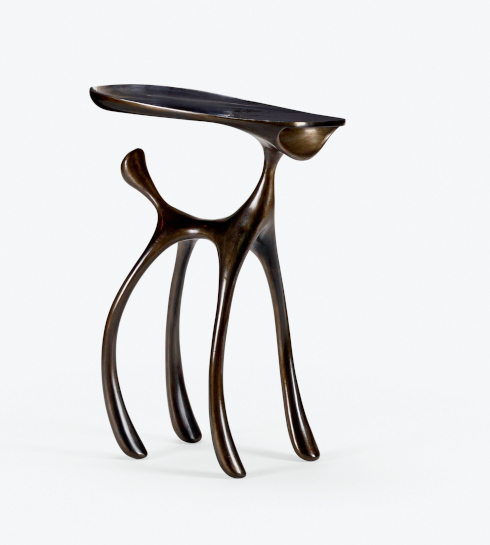 The Creature Table was inspired by contemporary graffiti in Rio de Janeiro and pre-Columbian Inca sculptures. It was sculpted in maple, then cast in Chicago in recycled metal alloys and hand finished. Photography by Eliza Mozer

While Michael Jordan flew on basketball courts, Jordan Mozer flew over oceans, designing projects from California to Korea, Japan to Germany. The Rolling Stones turned to him for stage set ideas, George Lucas for entertainment prototypes, Bill Kimpton and Bill Marriott for reimagining hotels, and a long line of others for restaurant designs. In each instance, JMA custom-made everything from seating to sconces, tables to torchieres, producing limited-edition pieces full of such whimsy and shapeliness that several are included in the Art Institute of Chicago’s permanent collection.

“We designed all of these places as walk-in dreams,” says Mozer, “and made them real, ensuring that every detail was consistent with the concept.” 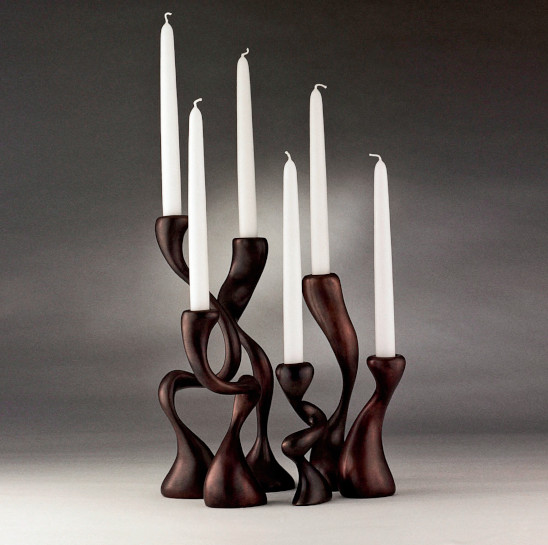 AnnaMae Candlesticks. Curly willow trees symbolize grace and femininity in Japan and were the inspiration for these candlesticks. Cast in recycled bronze alloys from maple sculptures hand-carved by Mozer. Photography by Doug Snower

San Francisco’s Cypress Club was just one example of Mozer’s critically acclaimed restaurant design. There, Mozer captured the feeling of post-World War II American optimism with pudgy, friendly design that shaped everything from pillars and paneling to juke-boxy light fixtures and chairs curved like the fender of a ’48 Hudson.

Charmed by this and other Mozer designs, hotel and restaurant guests started calling the studio hoping to purchase a mirror, a table, a sculpture, or chair they’d enjoyed on a night out or during a holiday stay. 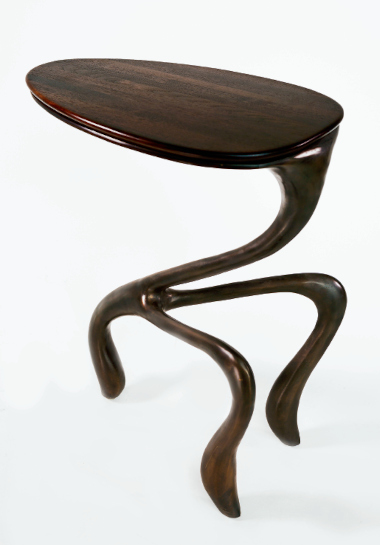 GooseGüss Table. Originally designed by JMA for a German hotel created from the ruins of an old iron foundry, the table’s name was inspired by foundry forms and techniques. “Gussmetall” in German translates to “cast metal” and the word “guss” sounds like “goose.” Photography by Monica Kass Rogers

“We were getting calls every month, but because we’d always thought of ourselves as restaurant and hotel people, for a long time we didn’t seriously respond,” says Mozer, “not realizing that the art we were making in the restaurant arena, would also work in people’s living spaces.”

Thankfully for design lovers, that’s all changed. Months before the pandemic, JMA converted a portion of its studio into a gallery showroom and began adapting its tables, chairs, lighting, and decorative sculpture designs for residences.

It was fortuitous timing and a great fit for the firm. Karen Lilly Mozer, Mozer’s wife and co-principal, specializes in residential interiors and has been busy throughout the pandemic. 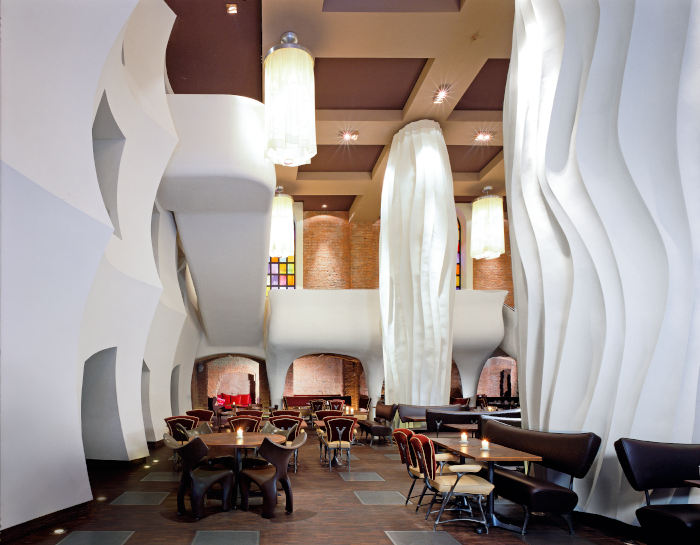 The East Hotel and Restaurant in Hamburg, Germany stands near the Reeperbahn where the Beatles got their start. Built from the ruins of an iron foundry bombed in World War II, the design captures the spirit of the old foundry while evoking in guests the wonder of a Westerner being immersed in Asia for the first time. Photography by Doug Snower

“While spending so much time at home, people have begun to pay more attention to details they’ve long overlooked or projects they’ve been putting off and seem more invested than ever in expressing themselves through the design of their spaces,” says Karen. “Practically, people now want or need their homes to simultaneously function as offices, restaurants, spas, and gyms.”

“My job is to help clients understand how they might live most fully in the home space” she adds, “by exploring what they most enjoy functionally and aesthetically, what possessions give them the greatest and the least pleasure, and what elements we can bring in to round all of this out, helping their home to become a calm and nurturing reflection of themselves.”

This has led to more demand for Mozer’s residential design items, as well as collaborations between Mozer and his wife, creating custom furnishings for residences that borrow from previous work. 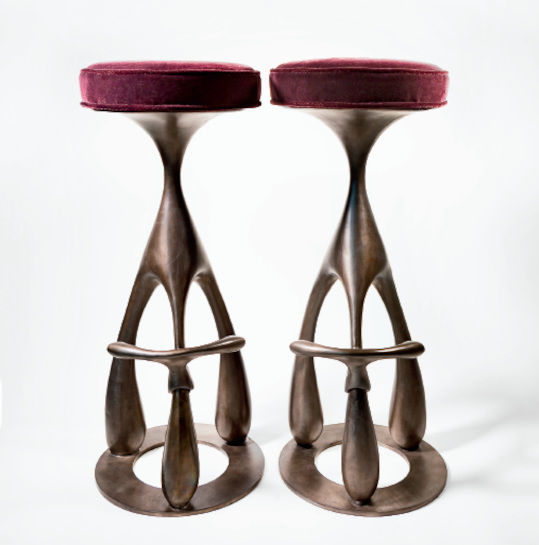 A variation on designs created for the East Hotel in Hamburg, Germany, and part of the
permanent collection of the Art Institute of Chicago, these stools are cast in recycled magnesium-aluminum alloy, hand polished and rubbed with elixirs and wax for a light patina. The seat is upholstered in mohair. Photography by Monica Kass Rogers

Many of the items are grouped in two collections available through the company’s website or by appointment at the studio gallery. Titled “HousePets” and “HousePlants” the collections show Mozer’s penchant for whimsical anthropomorphism and organic shapes. It’s a penchant that goes back to his childhood in Highland Park. “My mom was an advertising executive during the Madmen era, as well as being an artist and sculptor. I used to spend my free time in her studio. And my dad was a doctor who was happy to answer my questions about biology, which fascinated me. I spent a lot of time in the ravines, collecting little creatures and bits of nature, looking under rocks, and fishing. I became obsessed with certain plants and creatures, both living and extinct, and my earliest drawings and paintings combined my favorite elements of these—an elephant’s foot, the wings of a bat, the nose of an aardvark, into new creatures within imagined natural environments.” 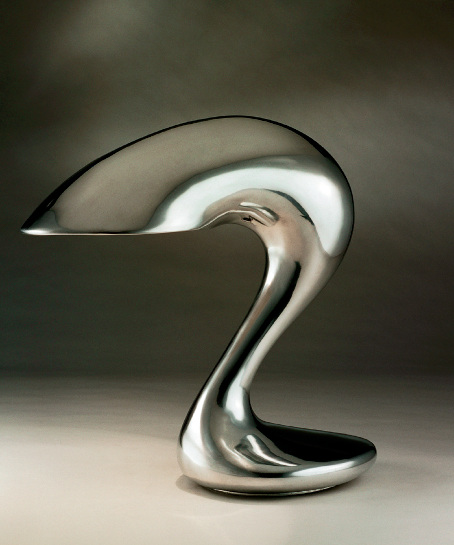 Eliza’s Big Bright Question Lamp. As a child Mozer’s daughter’s insatiable curiosity inspired this question mark of a lamp. First sketched and then carved and cast in Chicago in various metals. Photography by Tom Rossiter.

This childhood obsession is referenced in several HousePet pieces. A side table dubbed GooseGüss has a curving gooseneck rising above three elegant legs while the Creature table looks like a tiny fawn, poised to leap. 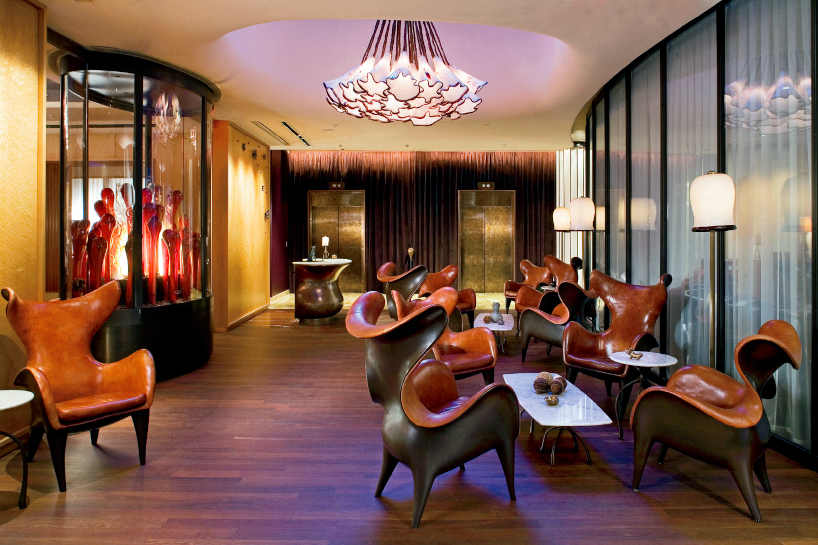 Hotel 57, New York City. The renovation of a residence for flapperera female artists and professors that was created by a fashion designer named Blum (flower), provided inspiration for Mozer’s chandelier bouquet and Frankie and Johnny Chairs, named for a popular song in the 1920s about a love triangle. Photography by Doug Snower

In HousePlants, organic themes prevail. There are Truffula lamps and tables inspired by the Truffula trees in Dr. Seuss’ The Lorax, plus a collection of twiggy lamps, chairs, coat racks, and candlesticks inspired by curly willow.

Renaissance Hotel Times Square. Bill Marriott asked Mozer to reimagine this hotel as provocative expression of the neighborhood. The “x” where 7th Avenue crosses Broadway to create Times Square is a prevalent motif in the hotel’s public areas. Columns throughout are based on set designs Mozer created for Mick Jagger merged with a 2,000-year-old observation by Vitruvius that column proportions are humanistic. This resulted in repeated
double xx—the chromosomes of a woman. Photography by Jeff Zaruba

The opportunity to live with such pets and plants has the potential to make home life richer. “No one could foresee the challenges to our lives that would come about because of COVID,” sums Mozer. “Forced to be homebound, people have become more reflective and need so much more from the spaces in which they live. It’s clear that cultivating spaces that are both functional and expressive, is helpful and important.”