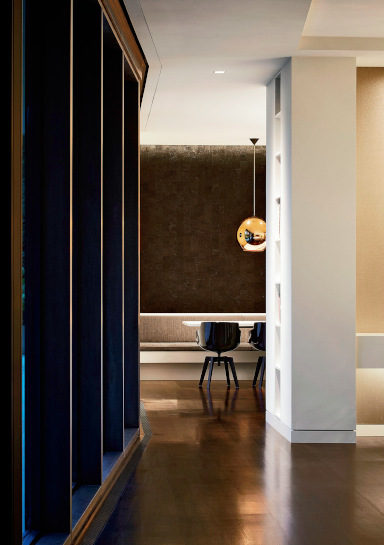 A gallery-like hallway displays some of the Tavel’s art collection. Photography by Kendall McCaugherty © Hall+Merrick Photographers

Winnetka-based architect Celeste Robbins found her calling at an early age simply by pairing her talent for mathematics with her love for art and design. She discovered a way to marry the two disciplines at Cornell University, studying architecture, and then, after a brief stint in Boston post-graduation, moved to Chicago to be closer to her family in the Midwest.

“It was the ‘80s,” Robbins recalls. “At the time, women in engineering felt novel and exciting. As my dad was an engineer and I did well in math, it just made sense. But I was also really interested in and had a passion for art.” 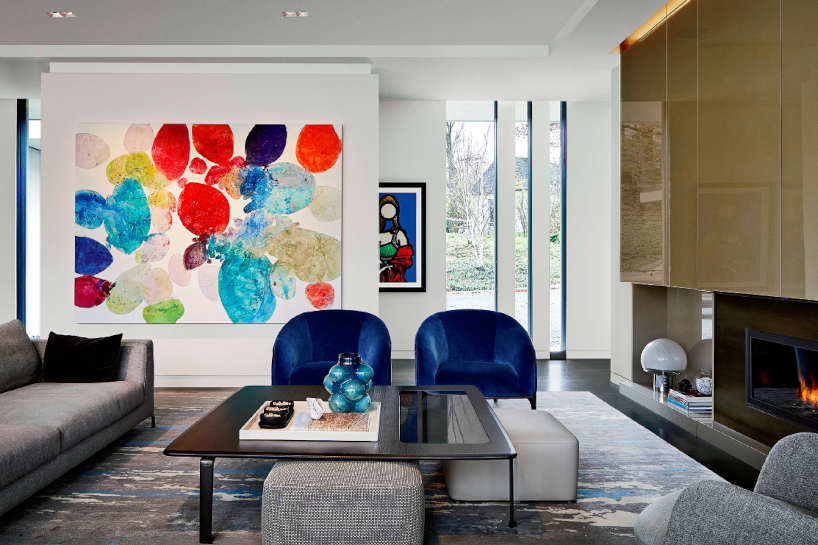 While an architect at the Chicago-based firm Perkins & Will, Robbins worked on large-scale projects, like educational facilities. Looking for an opportunity to continue pursuing her love of design while taking on the new role of motherhood, Robbins Architecture was born in 1995. Though it required late nights and some fearless learning, Robbins took on design, business, and job site visits with passion.

Soon thereafter, Robbins received an offer to design a 10,000-square-foot house in Jackson Hole, Wyoming from the ground up. With breathtaking views of the Grand Tetons, Robbins honed her signature aesthetic, one that is grounded in softness and minimalism to let nature be the star. “People think of modern architecture as a strong and powerful statement,” says Robbins. “For me, it’s the opposite. It’s about being quiet so nature becomes the art in the room. Ornamentation is edited so that there is space to appreciate the warmth of light or a play of shadow on the wall.” 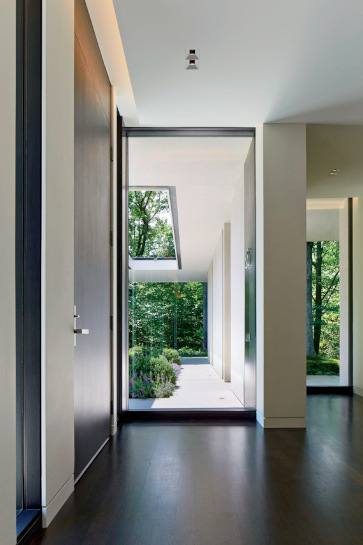 The house landed a feature in lauded design tome Architectural Digest, and Robbins has since completed five more projects for the same family.

Robbins took a similar approach in her own home, which caught the eye of Robyn Tavel during the Glencoe House Walk. Tavel later called Robbins and asked her to build a house for her and her family in the same spirit.

Both Robbins and Tavel spoke the same architectural language. The appreciation of clean lines, natural light, and views of the natural surroundings. Between magazine clippings and mutual inspiration, the house came to life. In addition to the outdoor focus, Tavel wanted to showcase the collection of bright and colorful art she shares with her husband. Tavel herself volunteers at the Museum of Contemporary Art. 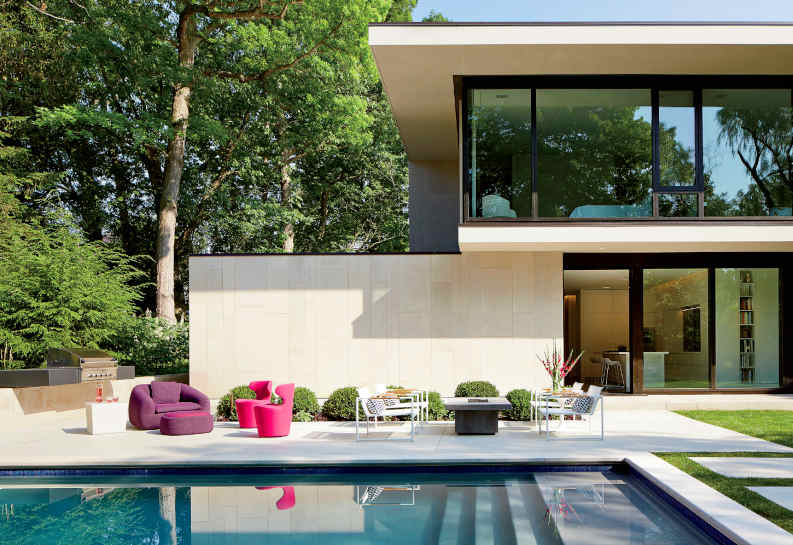 View of pool with easy kitchen access. Floor-to-ceiling glass captures the views of the pool and surrounding ravine. Photography by Steve Hall for Hedrich Blessing

“Modernism comes in many forms,” Robbins says. “I love organic elements, like oatmeal linen and branches, whereas Robyn loves pops of color and shiny things. Her enthusiasm was infectious. It was fun to do something new and outside of my comfort zone.”

Robbins used her tools to capitalize on the inherent beauty of the site, which faced a ravine with a dramatic woodland view. Floor-to-ceiling glass captured the site’s glory, each room feeling like its own treehouse and intimately connected to the seasonal displays.

However, this kind of openness would have created a privacy issue on the street facade. Here, Robbins needed to create visual interest with minimal glass. Using a creative pattern of narrow windows, Robbins animated the facade with an irregular pattern of glass and limestone. “I wanted to capture the artistry of the tree pattern found in the site’s woodland scene and bring it to the street facade for a soft dialogue between nature and building.” 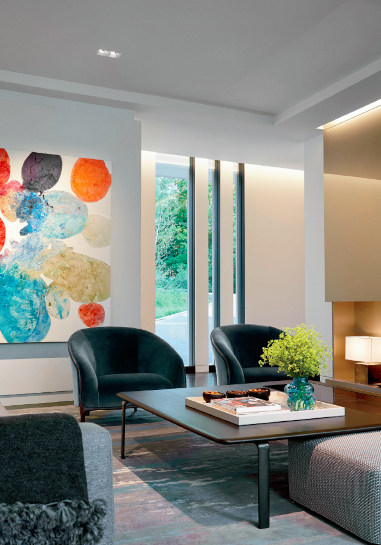 Framed view of the tree celebrates ”Nature as Art.” Photography by Steve Hall for Hedrich Blessing

To further soften the edges of the house, Robbins built an extended roof overhang to give it an ethereal edge. “I like to think of a home as a charcoal sketch or watercolor where the edges are blurred and meet the sky and its surroundings gracefully.”

“They saw the house as a piece of art, too,” says Robbins. “Even the choreography of moving throughout the home and living within its walls is its own form of art. Houses have repeated paths as you move from one room to the next. I wanted all of it to feel composed and crafted to present an experience as you live in the home.” Gallery-like hallways display the Tavel’s art collection, including pieces from contemporary artist Meredith Pardue and visual artist Julian Opie, alongside views of arboreal beauty. 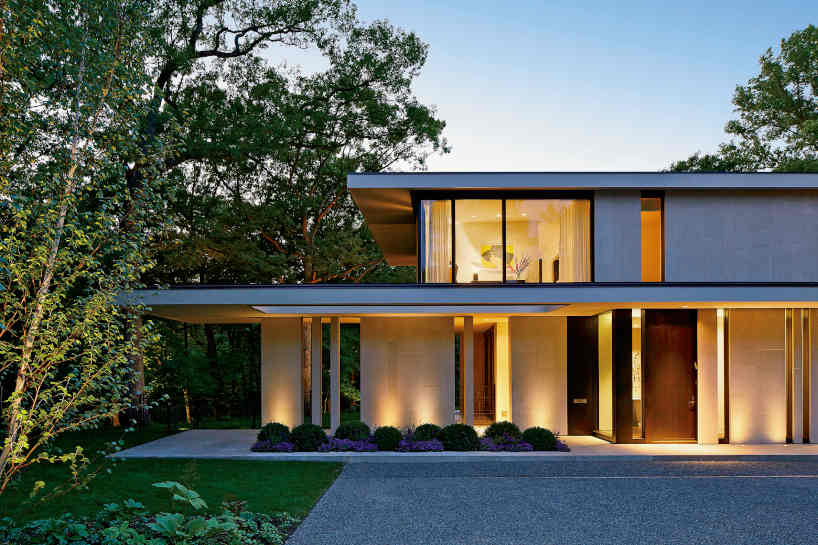 Using a creative pattern of narrow windows, Robbins animated the facade with an irregular pattern of glass and limestone. Photography by Steve Hall for Hedrich Blessing

Robbins now has her sights set on projects in Highland Park, Michigan, and Lake Geneva. Whether the site has a dramatic lakefront view or a quiet Midwest landscape, Robbins weaves the site’s natural beauty into the architecture. “Nature’s beauty is timeless. It doesn’t get it wrong and we can rely on it for authentic and changing warmth.” 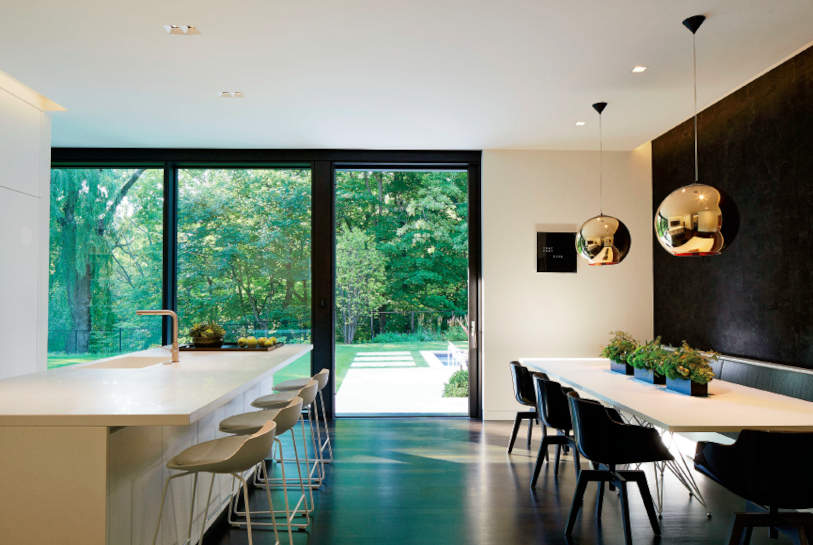 She’s eyeing trends where beauty is found in authentic materials like walls of book-matched marble and living finishes that celebrate age; all of which seemingly defy the laws of modernism but make sense through Robbins’ studied interpretation.

“Modernism is not an edgy, severe aesthetic. It is a collection of design principles—a balance of scale, an emphasis on the movement within and between spaces, and a connection to nature,” says Robbins. “These are the words that guide our work. Our clients allow us to be artists. Together we build a more meaningful home.”