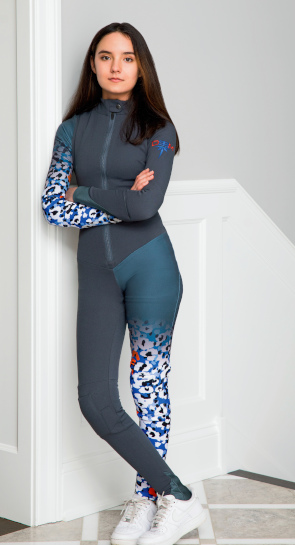 Five years ago, when Barrington’s Gianna Keuer first encountered indoor sky diving at Naperville’s iFly, she had no idea that one day she would be competing in a World Cup Competition.

On November 13, the first-ever all-female 4-way Dynamic Indoor Skydiving team, Volare, won the silver medal at the 2021 US Indoor Skydiving Nationals at iFly in El Paso, Texas. This win qualified the team for the World Cup Competition in Belgium next month. Keuer and teammates Kiana Adamson of Colorado, Bella Capra of Oregon, and Jill Knutson of New York are the fliers making up the team.

Keuer is a sophomore at Woodlands Academy of the Sacred Heart, an all-girls college-prep day and boarding high school in Lake Forest. “One goal of my team is to inspire girls to work hard and follow their dreams, and I believe that my experience at Woodlands has helped me do just that,” she says.

Working hard and training weekly at iFly is preparing Keuer for the big competition. Training consists of learning the physics of wind movement, which is the driving force of indoor skydiving. Participants wear flight suits and helmets while facing winds that can approach 160 miles per hour inside a vertical glass 14-foot-wide tunnel.

To be successful in this sport, Keuer says that several skills come into play. “First you have to be able to stay stable in the tunnel in different positions before you can start to carve and use more fluid movements. You have to get a feel for how the wind works and it’s hard to know how to do that at first because there is so much wind and it can be confusing. Staying stable requires mental focus, core strength, and agility.”

Keuer notes, “For speed, you can adjust how much surface area you use, like the wind in a sail. If you are on your stomach, you will go high, but if you’re straight up exposing less surface area, you will drop. Using your body to catch the wind, pushes you where you want to go, but like anything, this takes practice.”

The sport is touted as one of the most exciting and fastest-growing sports worldwide. In 2014, indoor skydiving was recognized by the World Air Sports Federation (FAI) with competitions now being held around the world. The sport is also being promoted as a future Olympic event—something Keuer would love to see.

“Being a part of this amazing team and representing the United States at the World Cup is a dream come true,” Keuer says.

Another team Keuer is part of is the nonprofit organization Hope’s In, where she focuses on educating and empowering atrisk teenage girls who live in the Guatemala City Garbage Dump Community. As a fluent Spanish speaker, she communicates easily with the girls she has met while volunteering for the past five summers and hopes to inspire them to follow their dreams.

The sky is the limit for this fierce flyer.