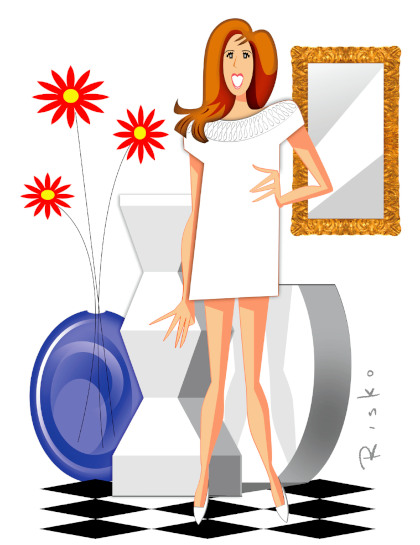 Fashion designer and entrepreneur Liz Lange thought she might write a memoir one day but never planned on a podcast. Then again, creating a namesake clothing label and selling it for millions of dollars was not on the radar either early in her career. “I think I was naive and I’m a risk-taker,” shares Lange, who recalls being among the first luxury brands to collaborate with Target, despite investors and mentors cautioning against the move. There was also a profitable partnership with Nike and a lucrative spot on the Home Shopping Network. It might be called an embarrassment of riches, except wealth is the one thing Lange did bank on for her future.

“I always knew we had this wild life throughout my childhood,” says Lange of the recent release of her new podcast The Just Enough Family (available for download on Apple and Spotify). The host, Lange’s friend, Ariel Levy, an author and writer for The New Yorker sat down with Lange for a one-off recording that turned into an eight-part series. Lange likens aspects of her experience growing up with a close-knit multi-generational clan to the dynamics portrayed in TV dramas such as HBO’s Succession. Her uncle, Saul Steinberg, the famous corporate titan of the 1980s, had amassed the largest self-made fortune in the United States by age 30 and was a billionaire by the time he turned 40. His right hand was Lange’s father, and many other relatives were on the company payroll. The tales are set against a backdrop of fancy Park Avenue apartments, lavish Long Island estates, plush private planes, and elite private schools, and recall very public affairs, both extravagant events and those of the heart. All that glamour was not lost on Lange, even when the money ultimately was lost in a bankruptcy filing that divided assets and family members. By that point, however, she had already learned to value the most important part of her legacy—establishing her own.

Lange graduated from Brown University and went straight to work at Vogue magazine. A small loan from her parents soon helped with the debut of Liz Lange Maternity. After hearing expecting friends and colleagues complain of a lack in stylish options, she sensed a market gap. Initially opened as a “by appointment only” Manhattan showroom, stand-alone stores quickly turned up in major cities around the country. The business grew along with Lange; she married and had a son and daughter.

“I didn’t set out to be a feminist, but this was the late ‘90s/early 2000s and the workforce landscape was shifting,” notes Lange, “power suits were in, and women didn’t want to lose that presence for any period of time, even nine months.” Her intuition for more form-fitting ensembles, that accentuated the obvious rather than concealing it, proved sensational. A direct-to-consumer approach became key in her past and present business models. “Every customer service email inquiry goes directly to me and I respond back—it takes a few minutes, makes the client feel good and feel heard, and lets me know what is and isn’t working way better than numbers or margins.”

Now with the acquisition of a new venture, Figue, a luxury collection of women’s dresses and soft separates that she aims to expand into a full beach to city 24/7 lifestyle brand, Lange is once more focused on a signature look. “I love kaftans,” she proclaims of the popular 1970s, flowy, comfortable, gown-like ensembles. Pieces are done in cottons and silks artfully embellished with patterns, prints, and bejeweled stones. She favors them for dress in her vacation getaway in Palm Beach (published in Elle Decor, March 2020), and summer home in East Hampton. The interiors of the former are chic and full of color, done in collaboration with Lange’s close friend from college, Jonathan Adler, the furniture designer and proprietor. The latter is known as Grey Gardens, with previous residents including the Washington Post’s Ben Bradlee and Sally Quinn, and Big and Little Edie Beale, once subjects of a 1975 documentary and cousins of Jacqueline Kennedy. “I’m much too old, or dare I say at this point, a little too private about myself to share selfies,” confesses Lange, admitting her popular Instagram account where she posts classic Hollywood movie stills or vintage celebrity paparazzi images has become a favorite pastime. Each photo is accompanied by her commentary, often a personal anecdote, typically relatable and attuned to what truth might be going on behind the scenes. “My feeling is why do we all have to pretend?” she asks, with a laugh, and intent on coming by her story honestly.