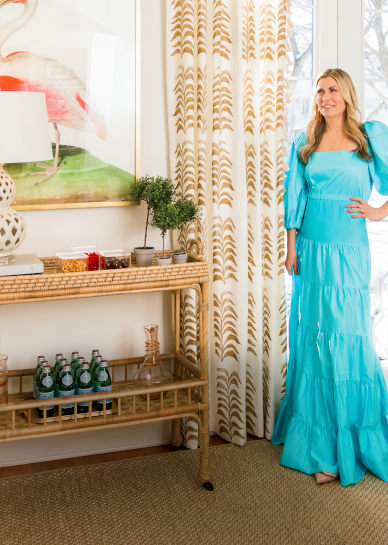 A native East Coaster, Glencoe-based interior designer Michele Frigon spent her summers growing up in the Hamptons. There she found inspiration in the classic architecture, lush landscape design, and coastal interiors, building a foundation for what would later become her thriving residential interior design business. 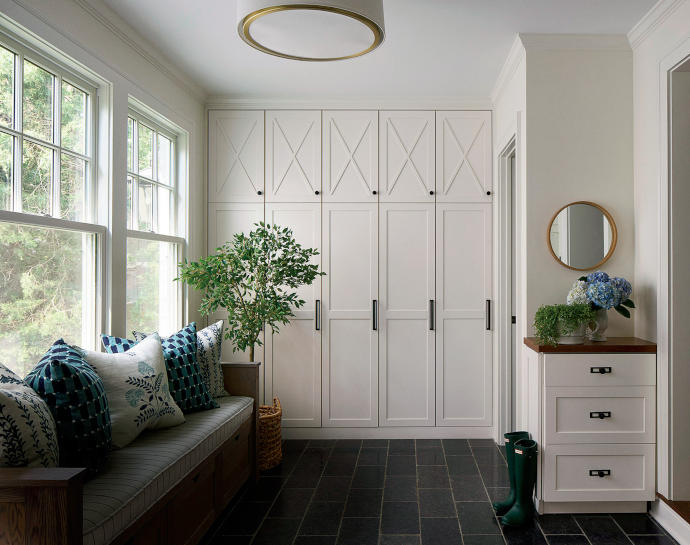 The mudroom is the new entry into our homes. Frigon likes to keep them functional, classic fresh, and beautiful. The architectural detail on the upper cabinets adds just enough texture and draws you into the space. The Belgian bluestone creates function as an indoor/ outdoor stone and a beautiful scale to the flooring. A custom-designed MFDLLC bench creates a solution somewhere between a built-in bench and a custom piece of furniture. Photography by Ryan McDonald, Styling by Kimberly Swedelius

Even though Alaskan cabins are a far cry from the design work she does now, Frigon says the experience served as the impetus for pursuing a formal design degree upon relocating to Chicago. She would then spend a decade working in model home concepting and staging and in corporate design before eventually moving to the North Shore and striking out on her own.

“Something that has helped me is having a background in architecture as well as in materials and textiles,” says Frigon. “Many designers feel more comfortable with one or the other, but I’m passionate about both. I honestly think part of that curiosity stems from spending summers in the Hamptons. That said, I don’t love the phrase ‘coastal design,’ but I do like the coastal look.” 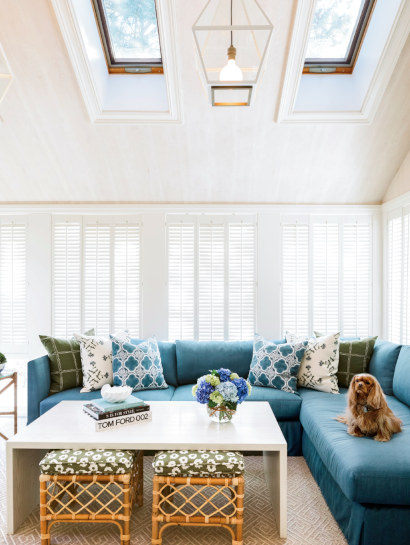 This sun room represents how placing a light fixture can bring the height of the ceiling down and create a more cozy seating area. Interest is created by the pattern play with the pillows and a layer of texture with the Serena & Lily ottomans. Photography by Kathleen Virginia

Her signature style mimics this sentiment and is defined as a curated blend of relaxed, refined, and livable design. And while other designers fall into either the pro-color or pro-neutral camp, Frigon says she embraces a philosophy of “controlled color,” in which she uses color in a restrained way that further highlights the design of a space.

She’s currently working on the interiors of a Bridgehampton-style house that’ll look “straight out of the Hamptons” when completed this spring and recently finished a classic Dutch Colonial in Winnetka for a family who had lived in the space for a decade before deciding to transform it into their dream home. Frigon aimed for fresh and timeless and somehow managed to pull it off during the height of the pandemic. 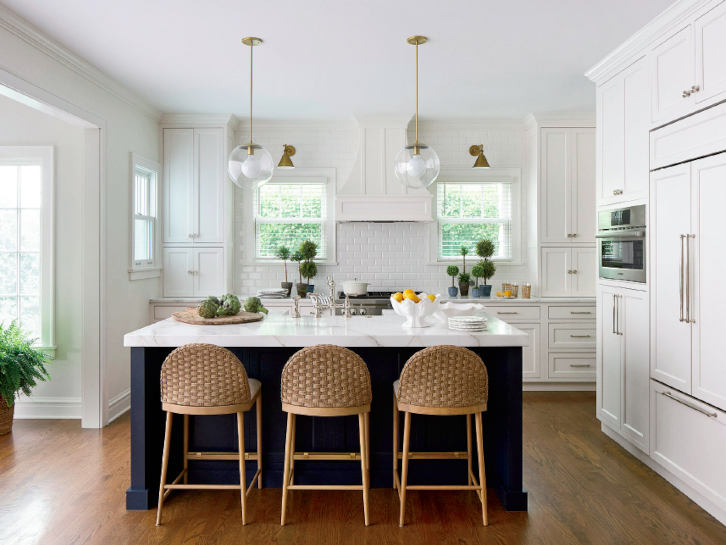 Barstools by McGee & Co. add a layer of texture to the kitchen. Photography by Ryan McDonald, Styling by Kimberly Swedelius

“I often find inspiration in the architecture of a home but also from the client themselves along with fabrics and textiles,” says Frigon. “They’re usually my spring point for a design and inform my decisions. I also love Instagram and have a library full of design books and magazines that I’ve been collecting for years.”

She’s been eyeing a few trends, like spatial efficiency in architecture as people continue to adjust to working from home; an influx of warmer tones, like chocolate, mustard, green with yellow undertones, and blues; and a rise in popularity for reworked vintage pieces that make something old, new again. 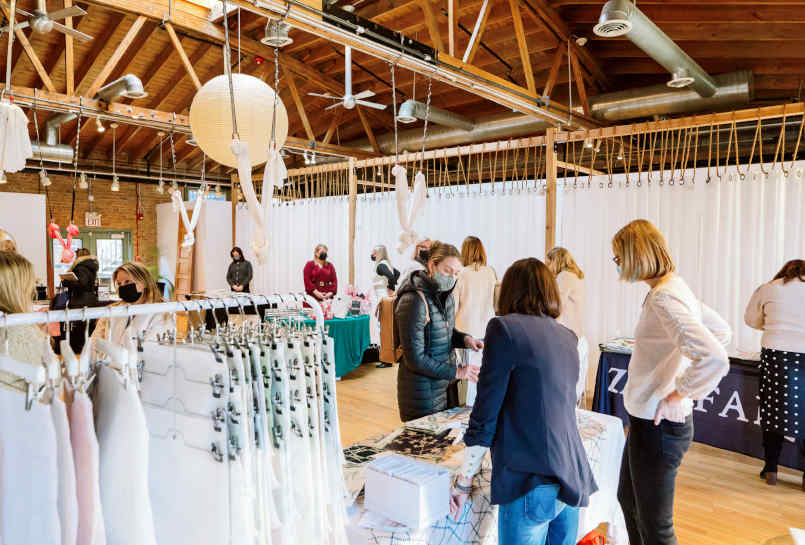 Frigon recently redid a desk in her own home, describing it as “shabby chic” until she refinished the piece in a high-gloss green hue and added new hardware from Modern Matter. One of her favorite partners is Chicago-based Vintage Refined, a refinishing company and custom furniture store in Fulton Market.

Her commitment to highlighting vendors and working with select partners is part of the reason Frigon was inspired to recently re-launch DesignerLink, a membership-based community with monthly trade shopping experiences solely for interior designers. 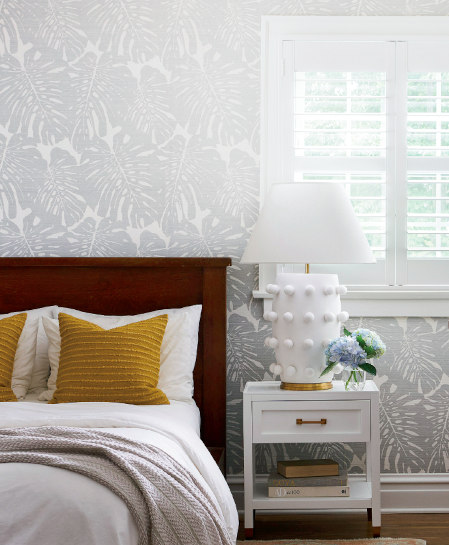 Using a softer tone on a large scale allows you to go bold, but in a soft, quiet way that will stand the test of time. A pop of one color, like the yellow in the pillows, creates balance in the design. Photography by Ryan McDonald, Styling by Kimberly Swedelius

Think exclusive access to more than 80 vendors, ranging from Holly Hunt and Phillip Jeffries to Schumacher and Visual Comfort, along with networking and mentorship.

“I started DesignerLink six years ago under a different name and format,” explains Frigon. “Coming from a corporate background, I was used to lunch and learns where we’d be educated about new products and see samples. I wanted to replicate that experience locally for myself and for my peers.” 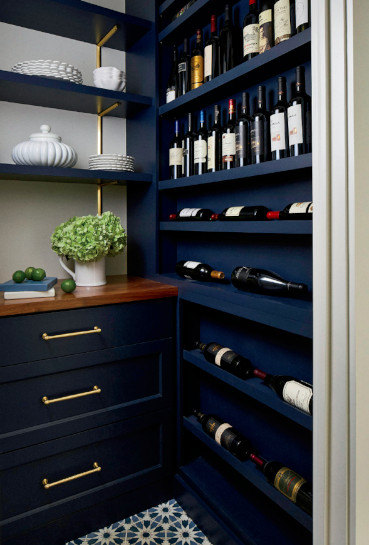 Painting the pantry a dark colorway adds drama and interest to a small space and makes the hardware stand out. The wine bottles and accessories act as the “art” in the space. Photography by Ryan McDonald, Styling by Kimberly Swedelius

She did that for a few years but calls it “very casual” without a formal membership program. As her business grew, Frigon knew it was time to expand DesignerLink into the format it is today but figured she’d do it for a year and see how it went.

“The designers involved were begging me not to let it go,” says Frigon. “And really, as the ultimate goal was to support small interior design businesses and to also support our valued design partners, I kept it going.”

This fall, Frigon partnered with Winnetka-based wellness sanctuary Sole + Luna for member events and says DesignerLink now has nearly 30 members, including both up-and-coming and established designers. One member, Lj Savarie, met Frigon through DesignerLink and the two went on to partner for the 2020 Lake Forest Showhouse benefitting the Infant Welfare Society of Chicago.

Similar to a pop-up, an average of six-to-eight trade partners attend each event, and designers can either shop or mingle and network—or a combination of the two. The idea is to make the interior design business model more efficient for both designers and their trade partners.

“It can be really hard to be on your own as a designer,” says Frigon. “When I first started, I worked in an office, and there was so much value in collaborating with others. Now, everyone is independent and on their own. Designers used to hoard their sources, but with DesignerLink we can be supportive of each other and share. It’s truly a wonderful asset.”