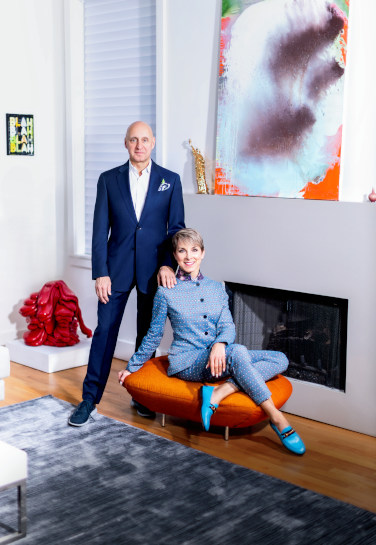 EXPO CHICAGO founder Tony Karman and his wife, Sondra Karman. Artwork: Blah Blah Blah by Mel Bochner, Entry in the Scumak Series by Roxy Paine, and painting above the fireplace by Jackie Saccoccio.

At an early age, Tony Karman recognized his life was not the life of an artist—even though he loved to draw and paint and grew up in an artistic household, he preferred to work with artists rather than as one.

“I never felt like I had the talent,” says Karman.

“However, I loved—and still love—to create, so I knew it’d always be part of my life. And that has been my career for the past 40 years, working in performing and visual arts along with civic engagement. Those formative childhood years really stayed with me.”

Between then and now, however, Karman worked throughout Chicago with organizations ranging from the League of Chicago Theatres, the Auditorium Theatre, and Merchandise Mart Properties to the Chicago City Council’s Committee on Special Events and Cultural Affairs, and the Metropolitan Pier & Exposition Authority. 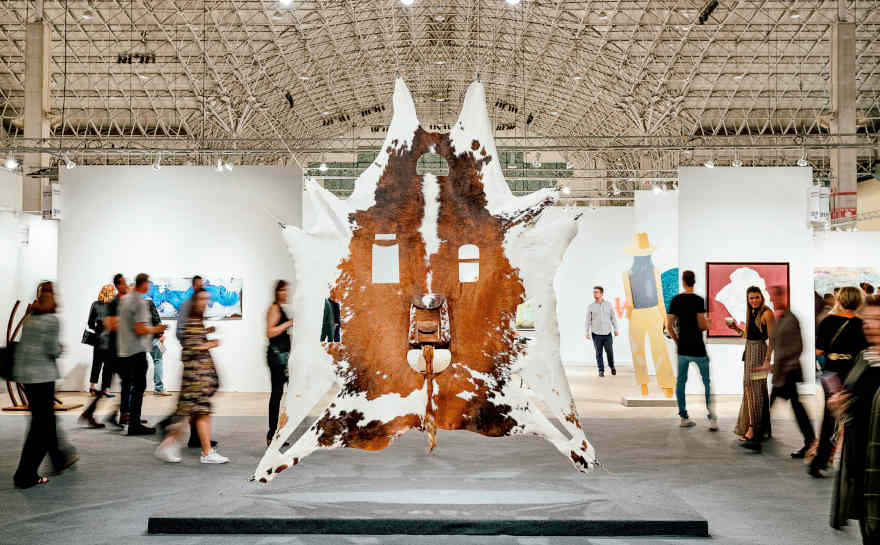 “The Chicago International Art Exposition exposed me to another way to work with galleries separate from either working in a gallery or as an artist,” says Karman. “I had no grand plan at the time. It was simply a wonderful way to meet civic and cultural leaders in the city and to build a foundation for my career.”

After Art Chicago, as the exposition had come to be known, collapsed in 2006, it was saved by the Merchandise Mart. Karman was then hired to run the show. His tenure there helped project Karman back into the international arts community after his stints in City Hall and marketing for Chicago theaters. 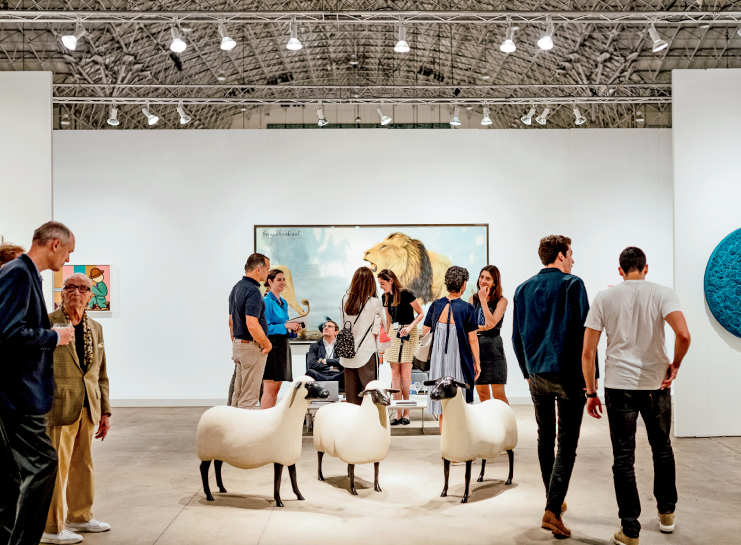 After Karman left, he decided to launch a new fair that “was in keeping with the vision and aspirations of Chicago’s cultural community and its collectors and institutions.” Thus, EXPO CHICAGO, the International Exposition of Contemporary & Modern Art was born in 2012.

“The minute I announced in June 2011, I gained significant support from the civic and cultural community of Chicago,” recalls Karman. “My experience had shown me what a great international art fair could be, so I took a shot to do it my way. Our first fair was in September 2012 and put a giant flag in the sand: Chicago is back.”

The timing could not have been more perfect, Karman says. At the time, many leading artists had chosen to stay and work in the city rather than depart for the coasts as had so often been the case in the past, paving the way for other artists to do the same. Think visionaries like sculptor Nick Cave, painter Kerry James Marshall, and social practice installation artist Theaster Gates. They all proved one could have an international career but still live and work in the Midwest.

And the gallery scene was growing, museum leadership was strong, and galleries were building reputations worldwide. EXPO only then served to amplify what was already happening in Chicago, taking advantage of a singular convening moment. 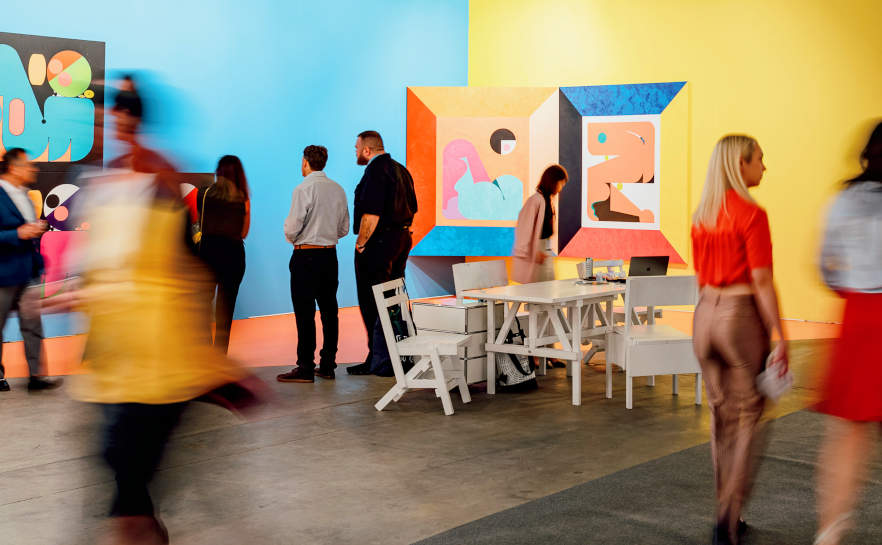 Drawing upon the city’s rich history as a global destination for arts and culture, EXPO CHICAGO hosts more than 135 leading international exhibitors presented alongside one of the highest quality platforms for global contemporary art and culture, all to highlight the region’s contemporary arts community and inspire its collector base.

Running concurrently with the exposition, EXPO Art Week highlights the vast cultural opportunities that Chicago has to offer to collectors, dealers, art enthusiasts, and tourists. With EXPO CHICAGO as the centerpiece, the exposition joins together with over 45 of the city’s most prestigious cultural institutions for a citywide celebration of art and culture, including museum exhibitions, gallery openings, installations, public art projects, music, theater and dance performances, and special dining experiences. 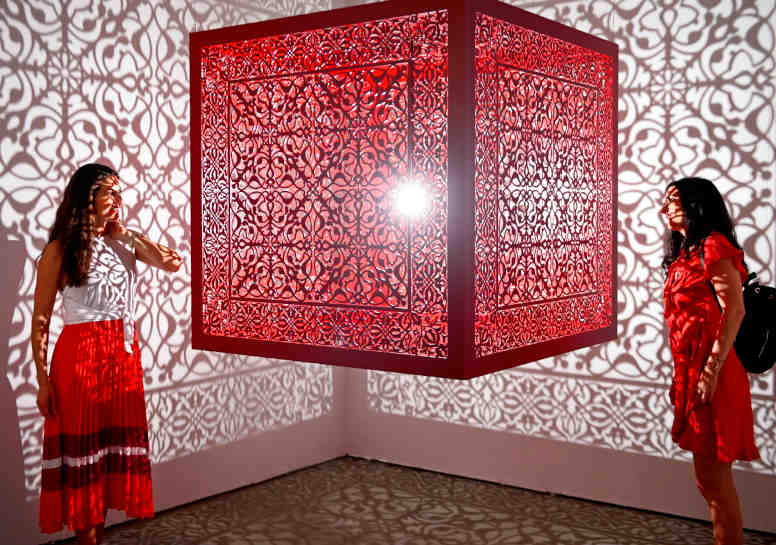 “We had one shot to do it right,” says Karman. “I press awfully hard to make sure we present ourselves in a way that’s respectful to exhibitors and to the aspirations of the fair, which is to present critically-acclaimed programming, showcase brilliant dealers, and shine a spotlight on Chicago. Ultimately, though, we are in service to our exhibitors.”

EXPO returns this April to Navy Pier—after a two-year hiatus thanks to the COVID-19 pandemic—with a diverse list of dealers and leading galleries. This year, EXPO will also launch its inaugural Director’s Summit, which will gather eight emerging art museum leaders from across the country for a series of conversations about the future of museum leadership and institutional reinvention.

“All of the pieces are in place to return stronger than ever,” says Karman. “This has not been an easy time. I’ve learned a lot about my own resilience. I truly cannot wait to welcome the world into our city again and start anew.”