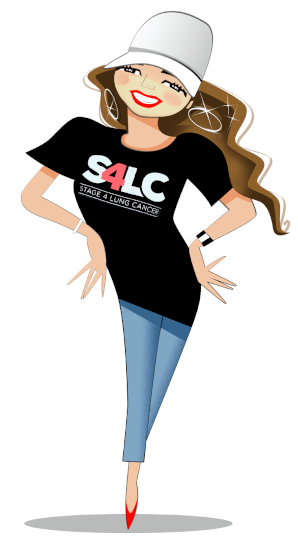 Erika Hlavacek was 5 when her eyes tripled in size during an impromptu visit to the cockpit before a flight to Disney World.

“I was overwhelmed and thrilled,” recalls Hlavacek, who lives in Wilmette with her husband, Jeff, and their children, Francesca, 13, and Antonio, 12.

“Right after entering, I asked the three uniformed men inside, ‘How does all this stuff work?’ I fell in love with that space, with the instruments, with the controls; I was mesmerized.”

Hlavacek fulfilled her dream of becoming a pilot, flying Southwest Airlines passengers for five years. However, a diagnosis of Stage IV lung cancer in 2017—Erika is a carrier of the ALK genetic mutation that drives her cancer—forced her to retire.

No more flight destinations. Hlavacek had to embark on a cancer journey.

And, achingly, 18 months later, her husband (a UPS pilot) was diagnosed with Stage III colorectal cancer.

“Thank God his cancer is not terminal,” Hlavacek says.

Children of parents with cancer take journeys, too, most of them of the bumpy, unpredictable, and trying variety. That’s why two other sets of North Shore parents—with the father of each (Mark Agnew and Ned Smith) having absorbed a cancer diagnosis—invited the Hlavacek couple’s children to join a unique group dedicated to helping kids with a parent, guardian, or a caregiver who has cancer.

It’s called Pickles Group, and it launched in early November.

Its mission is to create thriving communities of kids supporting kids through their parents’ cancer journeys. Cassy Horton serves as the nonprofit’s executive director, and Kelsey Mora—who designs the curriculum for Pickles Group gatherings at schools, libraries, and community centers—is a dual-certified child life specialist and licensed professional counselor.

Pickles Group aims to expand, locally and nationally, in 2022.

“Children of parents with cancer often struggle with loneliness and isolation,” Hlavacek says, adding more than 5 million American children are affected by a parent’s cancer. “I know our kids have been affected. But Pickles Group sessions are working. These kids get together, talk, and listen. They ‘get’ each other. They also take comfort in knowing they are not alone.”

“Parents,” she adds, “are not allowed at any of the sessions; a Pickles session is a kid’s thing, the way it should be. They’re becoming more open about talking about their parents’ diagnoses, and they’re forming lasting friendships along the way.”

In the group’s signature program, Pickles Empower, the children participate in activities designed by Mora. The sessions build on such themes as learning, shared experiences, coping, processing feelings, and expressing gratitude and hope.

The children chose “Pickles” for the name of the group because during an ice-breaker they realized they all loved pickles. That connection evolved into a theme song, The Pickle Song.

But the leaders of the organization are serious about addressing a delicate issue in a professional, welcoming way through nurturing get-togethers.

Sadly, Smith—a founding parent of Pickles Group, a father of four, and a beloved business school professor at Northwestern University—died days before the group’s launch, and three years after being diagnosed with glioblastoma, an aggressive form of brain cancer.

What heartens Hlavacek more than anything else today is what Pickles Group has been able to do for local children and teens. The group has been a haven, a vital entity that assures, and reminds, its distressed members, Your well-being matters as much as the health of your parents does.

“Kids of parents with cancer are struggling out there,” Hlavacek says. “My hope is that those parents hear about Pickles Group and realize that kids supporting kids, in an inclusive environment, can be wonderful and magical.”