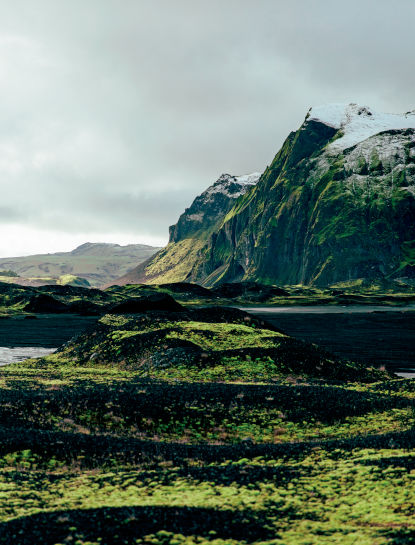 Icelanders take great pride in telling tales of the island’s elfin lore. Perhaps these stories are inspired by the fantastical country they occupy? This land of fire and ice contains an extraordinary range of landscapes from erupting volcanoes to shifting glaciers and many wonders in between, including black sand beaches, moss blanketed mountains, geysers, hot springs, and waterfalls aplenty.

One moment you are hiking a glacier in search of an ice cave and the next scaling the side of a quivering volcano. I found these vastly different experiences and the Icelandic terrain to heighten all five senses; yet, I simultaneously experienced an intense feeling of peace—a desire to take a deep breath and hold on to every second. 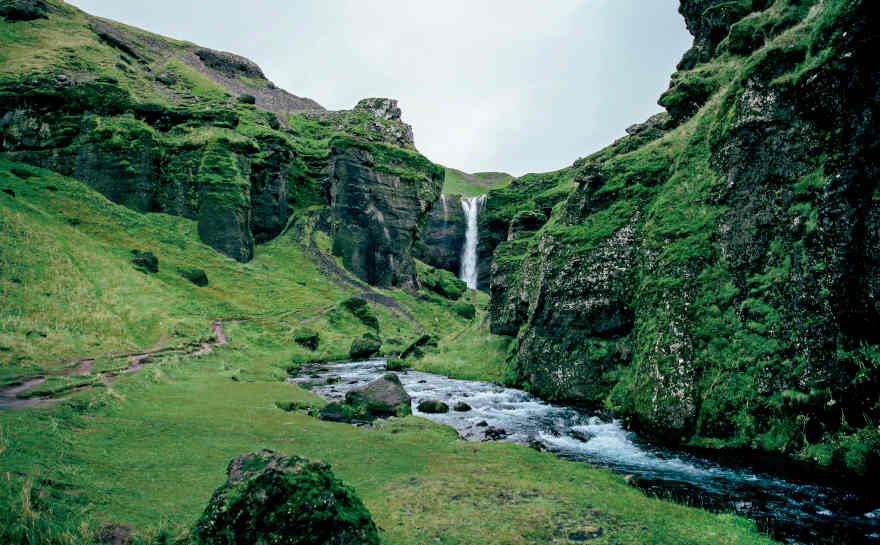 The visual landscape alters so quickly—you might find yourself gazing upon amber waves of grain, a purple sky, and a mountain’s glowing pink tip. Then the sun moves imperceptibly, replacing the colors with golden grains and an orange sky. Night falls and the sky is illuminated with the famed Northern Lights alternating in streaks of purple and green. To say Iceland is a visual feast is an injustice … it equates more to an endless banquet of visual treasures. The elves’ handiwork?

Turning to the sense of hearing, audible are sounds of ice cracking, water rushing, the wind’s whooshing, and the Arctic Ocean’s distant roar. The sense of touch varies between the intense heat of a hot spring, a breeze’s cool breath, a waterfall’s wet spray, and the gnarled surface of hardened lava—magma turned to “stone” in mid-flow like Medusa gazing at her reflection in Perseus’ shield. 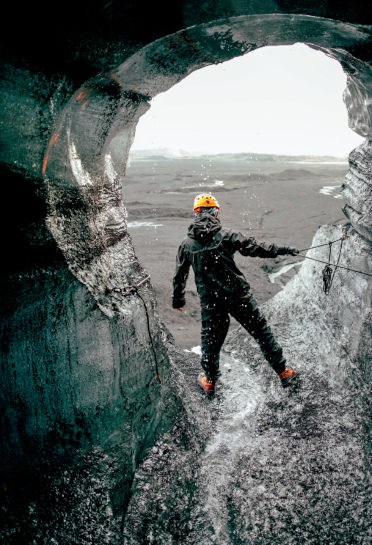 Taste is an explosion of flavors ranging from the delicate Icelandic cod to the tang of fermented shark cartilage. The libations vary from tomato beer to whiskey heated over sheep dung and are all worth exploring in great abundance. Lastly, the sense of smell is intensified particularly with the cuisine and spirits (you’ll never forget the sharp scent of Iceland’s signature spirit, Brennivin, downed after that fermented shark morsel melts in your mouth). The air is a clean, crisp, wonderful scent—a result of being situated in the middle of the Arctic Ocean.

Although rather small, Iceland is a country that beckons visitors back again and again. This was my second trip in two years, and it will not be my last. On this adventure, we toured the country’s southern coast in late September just on the heels of an Icelandic summer. The flight was remarkably easy. I highly recommend the direct flight on Icelandair from O’Hare to Reykjavik— clean, comfortable, on-time, and taking hours less than a drive to Nashville. 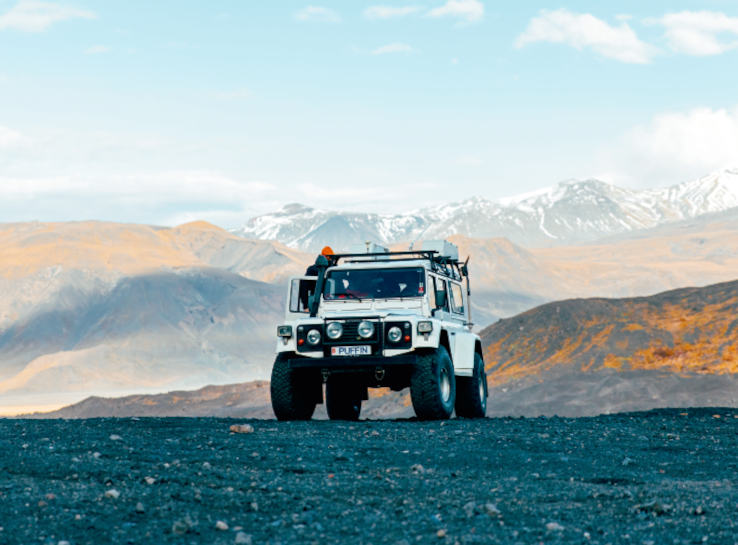 Upon arrival, we hopped in our Superjeep (a thrill in its own right) and drove an hour and a half to Hotel Rangá. Centrally located on the southern coast, Hotel Rangá is highly sought after by the avid traveler and celebrity guest. Chosen by both the Kardashian clan and the Real Housewives of Orange County, the hotel has proven to please even the most demanding visitant.

Commanding the helm of the family-owned hotel for the past two decades is the consummate host and entertainer, Fri›rik Pálsson. The log cabin-style hotel offers 52 rooms including seven continent-themed suites (Antarctica’s décor is an Instagrammer’s dream), gourmet Nordic fare (think Reindeer Carpaccio), geothermal heated hot tubs, and a state-of-the-art observatory for stargazing. My room had a charming view of the East Rangá River (one of Iceland’s finest salmon rivers), Mt. Hekla volcano, and on certain lucky evenings, the Northern Lights. The hotel’s secluded countryside location and lack of light pollution provide optimal conditions to view these bucket-list lights. If you don’t want to miss any late-night appearances, the hotel offers Aurora Borealis wake-up calls to ensure everyone gets a glimpse of this treasured wonder no matter what time of day or night. 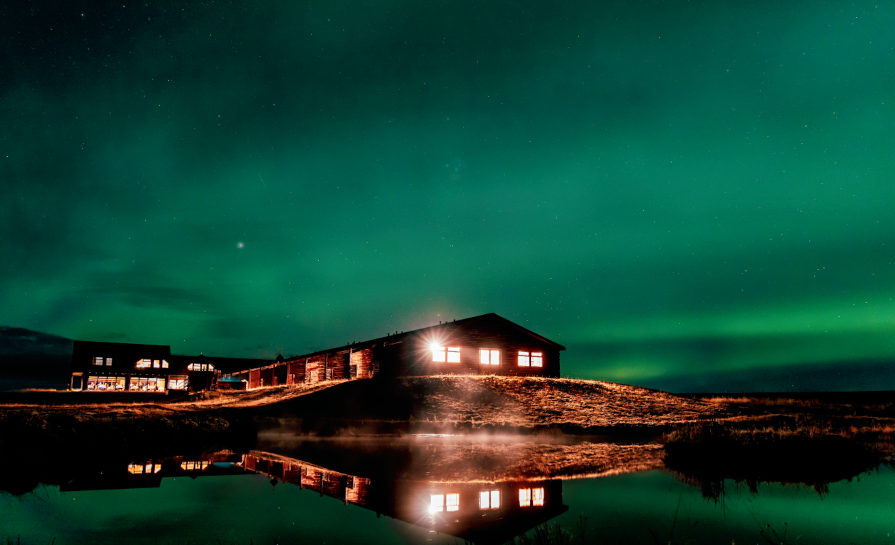 Hotel Rangá and the Northern Lights

For those visiting Iceland, adventure calls and South Coast Adventure answers. Hotel Rangá worked closely with the company to secure an abundance of activities for us. We adored our guide, Siggi, a trained geologist; by week’s end, he had taught us so much and practically felt like family.

Our Icelandic escapade began in the Caves of Hella—a historical mystery, these manmade caves are thought to have been first inhabited by Irish monks in the early to mid-9th-century. However, the country’s Sagas are oddly silent on the subject … adding to the intrigue of these underground chambers. Of the recently discovered 12 caves, four are open to the public. We enjoyed a spirits tasting in our final cave sampling an assortment of Vor gins and Floki Whiskeys from Elmverk distillery. One libation bore the name “Hell,” and lived up to its moniker, packing quite a punch. 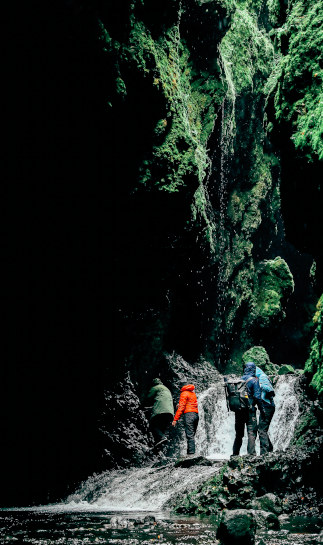 Just before the final climb to get to Nauthúsagil waterfall

With bellies spirit-warmed, we headed to Skei›vellir, a beautiful Icelandic horse farm near our hotel. A must on any visit to the island is a ride on this beloved horse—the world’s purest breed. These darling somewhat squat animals are experts at the “tolt,” which is smoother than a canter. Tolting horseback across the countryside with an Icelandic wind rustling your scarf is not to be missed.

Our second day was jam-packed with waterfalls, my favorite being Seljalandsfoss—a stunning example of nature at its finest. Don a raincoat for the trek behind the falls—truly breathtaking from every angle. Nauthúsagil is a secret waterfall and discovering it is an adventure requiring a bit of a hike deep into a scenic canyon while gingerly stepping over stones that barely peek out of the water’s surface. Shortly before reaching the falls, there is a fairly arduous climb (accomplished while clinging to a chain) but it is well worth the effort! 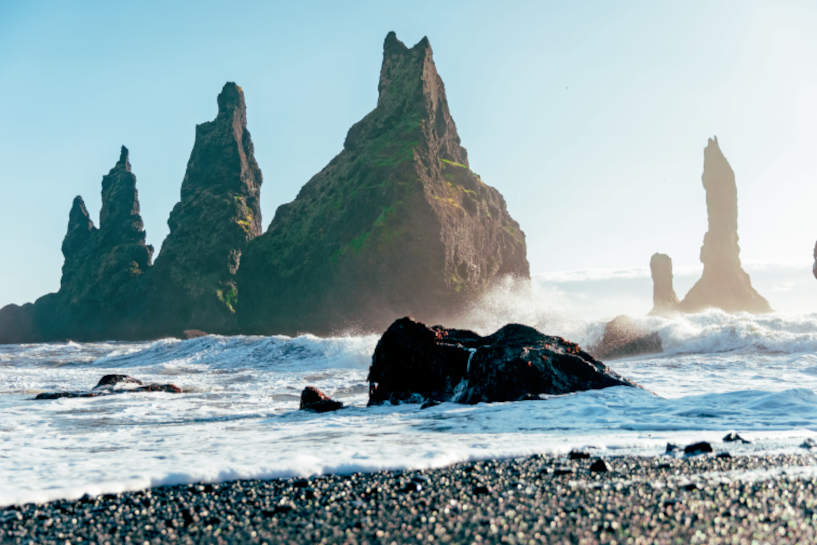 We left rushing water for the frozen sort and found plenty at the Kötlujökull glacier. Our goal? To locate an ice cave. These caves intermittently change location as they are constantly melting. With crampon-clad boots, we traversed the glacier crossing the cave’s threshold. Upon entrance, I simultaneously felt excitement and fear. I could hear and see the cave melting but the experience was literally “cool” and a once-in-a-lifetime opportunity. Emerging from the cavern’s icy interior, the landscape rolled out before me in a black blanket that gave way to mountains wrapped in chartreuse capes—an astounding juxtaposition of black and green.

Jumping back into our Superjeep and careening along the black ribbon road that hugs the shoreline, we headed to the Reynisfjara black sand beach. Before exploring, we stopped for lunch and the best burger of my life at the stylish Black Beach restaurant (svartafjaran.com). 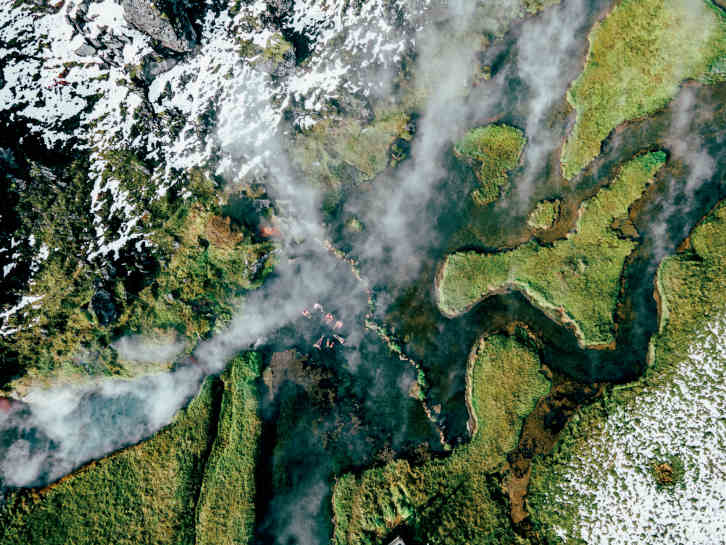 Fully sated, we walked the beach and marveled at a wall of nature- made columns. Apparently, basalt lava fractures when cooled and creates this stunning formation, both a joy to climb and a pleasure to look at. Siggi explained that Iceland has black beaches because it is a relatively young island in geological terms.

A dune buggy tour with South Coast Adventure marked our final escapade of the day. “Thrilling” and “wild” are terms that come to mind—we caught air, dove through streams, chased rainbows, hugged ditches, and flew across the Icelandic countryside in an hour I will never forget. South Coast Adventure provided special suits, boots, gloves, and helmets because you get so dirty! Ah, but it was worth the sludge. Emerging from my dirt-encrusted buggy, I felt young, hip, and fearless. 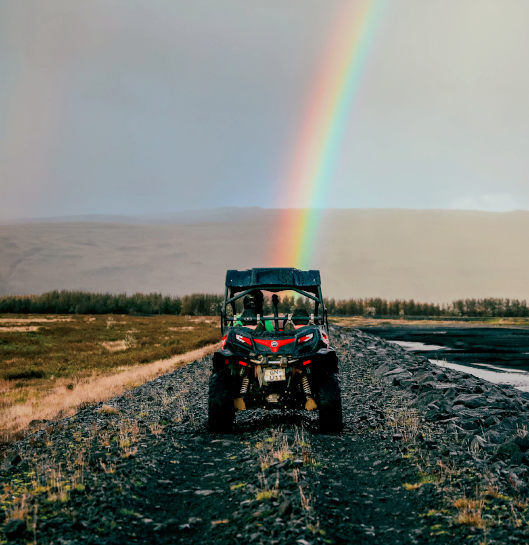 Chasing rainbows in the dune buggy

My absolute favorite day of this glorious journey was venturing into the Highlands. Our Superjeep proved a necessity as we learned that Search & Rescue is often called to assist tourists who attempt the expedition in vehicles ill-equipped for the terrain. We bumped over rocks, plowed through rivers, scaled mountains, and crossed narrow straits with the sides of the road plummeting steeply just beyond my door.

The Highland’s vast snow-covered, jaw-dropping expanse is the definition of majestic beauty. Stunning lakes appear deep inside the center of mountains, and the rocky ranges go on for as far as the eye can see. We did not encounter a single person for six hours (except for the attendant at the hot spring). 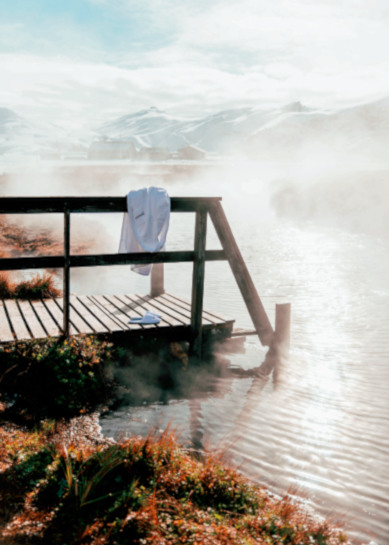 Just before lunch, we made it to the Landmannalaugar located in the Fjallabak Nature Reserve. Donning swimsuits topped by cozy hotel robes we followed the narrow walkway to the watery opening in the snow. Descending the ladder we lowered ourselves into the hot spring heated by geothermal energy (heat from the earth’s interior) and made our way to the spring’s center. Sipping Opal Icelandic liqueur while sitting in a circle with steam dancing on the water’s surface, we engaged in deep philosophical discussions and enjoyed the ebb and flow of the toasty current. On our way out of the Highlands, we visited Sigoldugljufur—an immense canyon with the most beautiful waterfalls. The vision of the water’s incandescent glow as it poured over the rock proved each site in Iceland is impossibly more fascinating than the one before. 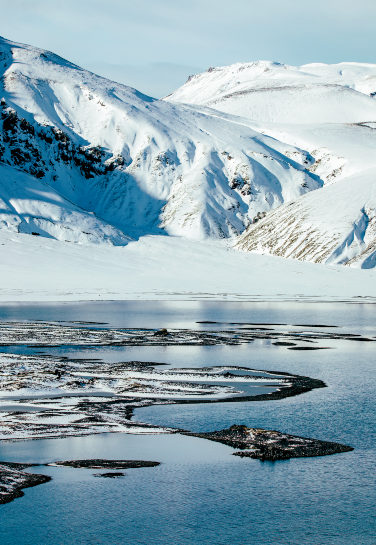 On our last evening, we learned the Geldingadalur volcano was in the midst of an eruption. The next morning, we decided to forego our day in Reykjavik and headed to the active site instead. Scaling the side of a mountain directly opposite Geldingadalur we hoped to witness a lava flow. The steam from the unseen lava moving in the volcano’s belly was all we saw, however, the proximity to the crater and the view from the mountain made up for the lack of lava. We headed down to the base and explored an old lava flow. The surface is cool to the touch but there are many crevices where white steam escapes—evidence of magma churning deep within.

I could go on for ages about my love of Iceland but honestly one must experience the country for themselves to truly grasp its magic and majesty. Book your ticket, the elves are waiting, and your five senses will thank you.