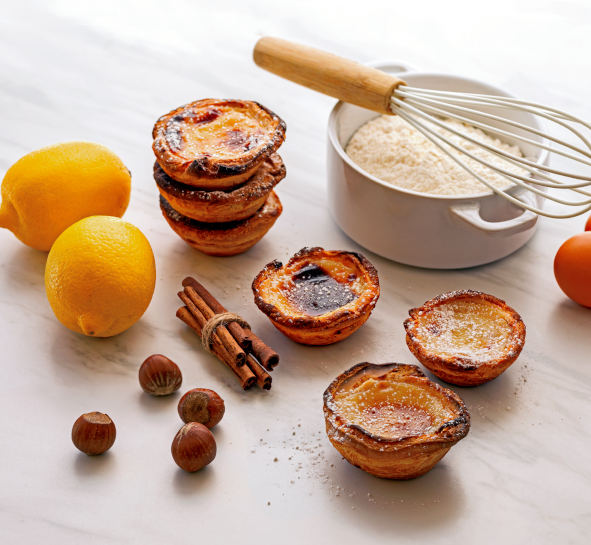 In Portugal, little egg custard tarts called Pastel de Nata are ubiquitous, found at every espresso stand or coffee shop. “We eat them every day there,” says Teresa Sousa, co-owner and spokeswoman for Inbictus Factory bakery. “They’re as popular as doughnuts are here.”

Eggy desserts have been a Portuguese favorite since the 18th-century, thanks to the laundering practices of nuns at convents and monasteries there. “They used egg whites to starch their habits and monks’ clothes,” Sousa explains. “So there was always a surplus of egg yolks that they then baked in sweets.” 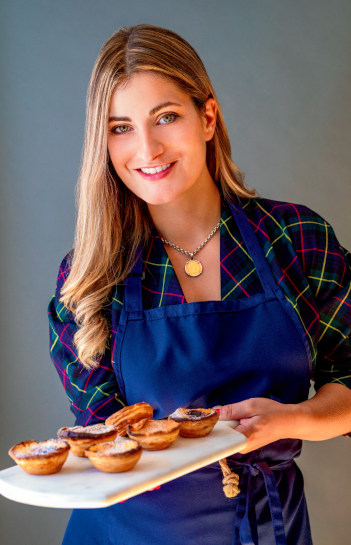 “But of all of these, I missed Pastel de Nata the most,” says Sousa. Relocated to the Chicago area from Portugal five years ago, Sousa temporarily soothed her longing for Pastel de Nata during visits to her friend Maria Vieira’s house. “Maria is a fantastic baker,” Sousa explains, “she would always have Pastel de Nata, or some other delicious thing baking when I was there.”

Like Sousa, Vieira came from Porto in Northern Portugal. “And that made it easy for us to relate,” says Sousa. “We have the same accent, same outlook, same love for Portuguese baking, and despite an age difference, we get along well.”

It was just a matter of time before the two realized, “We need to bring Pastel de Nata to the public here,” says Sousa.

Their fledgling tart-baking company Inbictus Factory, launched in December 2020, is doing just that.

Whimsically, the name, “Inbictus” is a fun poke at Northern Portuguese accents. “The word is actually ‘Invictus,’” Sousa explains, “After Porto, our beloved hometown, which is known as the ‘never conquered city,’ Cidade Invicta. But where we are from, “V” is always pronounced “B,” so with that you get, Inbictus. It’s always a good conversation starter with our customers who want to know who we are and what we do.”

Both accomplished businesswomen—Vieira an engineer with more than 20 years of experience, and Sousa, a designer with her own shoe brand (Lutreet chic streetwear), the two have slowly been growing Inbictus with placements in coffee shops, gourmet groceries, catering companies, and restaurants. Among them? Birdy’s Coffeehouse and Anam Cara Café in Libertyville, Froggy’s Café + Gourmet Frog Bakery in Highwood, Goddess and Grocer in Bucktown, and several more locations in Chicago.

Making the tarts continues to be a labor of love. “I still remember the first day, making 197 tarts,” says Sousa, “I came home exhausted. And now, we are making 3,000 of them every day!”

Vieira is a master of puff pastry, with the characteristic special slicing that creates a coil in the bottom of each tart. Sousa shapes and presses the dough into the baking forms to be filled with custard. “We joke that Maria—because she has to work the dough, is going to get huge shoulders like Johnny Bravo, and I’m going to get huge thumbs from pressing the dough in,” Sousa laughs.

Looking ahead, “A brick-and-mortar location will always be in our dreams,” says Sousa, “but right now, we are building brand recognition and keeping the focus on wholesale, selling only to our partners, and making sure they have success.”