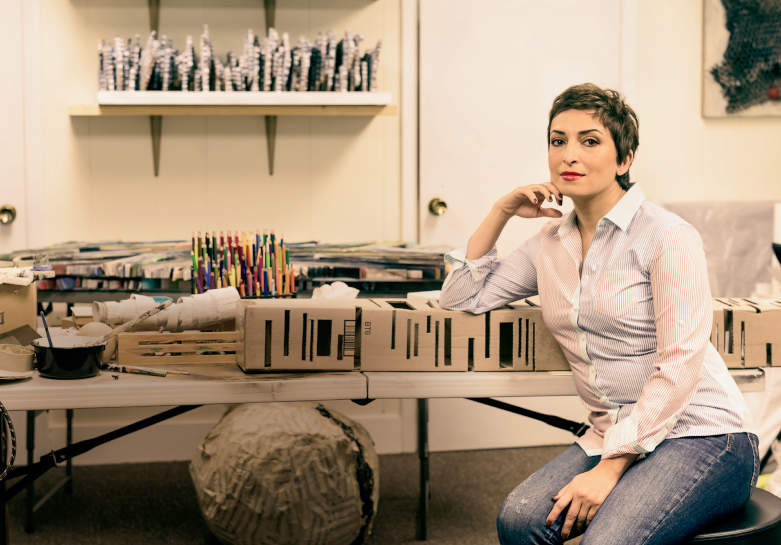 Chicago-based Iranian-American artist Azadeh Hussaini first discovered her passion for artistry as a teen. She received what she describes as “informal training” from her father Reza Hossaini, a prolific Tehran-based painter whose work blends the line between classicism and modernism and has been featured in more than 50 solo and group exhibitions, who gave Hussaini art classes in his studio during the summer.

“At 13, I didn’t think I would ever be an artist,” says Hussaini. “I wanted to be an actress and directed a short play at school. My father told me, ‘This is not a career for your future.’ I realized painting is something I could truly connect to. It was my language for that age.”

She earned her BFA in painting from Azad Art University in Iran then moved to the United States to obtain her MFA in non-figurative painting from the Academy of Art University in San Francisco. She’s been working full-time as a practicing artist ever since, and her work has been displayed in numerous solo and group exhibitions in both the U.S. and Iran.

Hussaini utilizes myriad mediums to explore her emotional responses to her own experiences while, at the same time, attempting to understand the basic primordial desires within the human condition. She aspires to discover commonalities among us while providing forums for open discussion and social assertiveness.

While she once considered herself a painter, Hussaini now uses a paper-focused medium that combines layers of pages from newspapers, magazines, and books. Her first-ever paper work, a 30-inch by 30-inch wall-mounted artwork, sold immediately in 2013 and motivated Hussaini to continue with this unique artistic path. 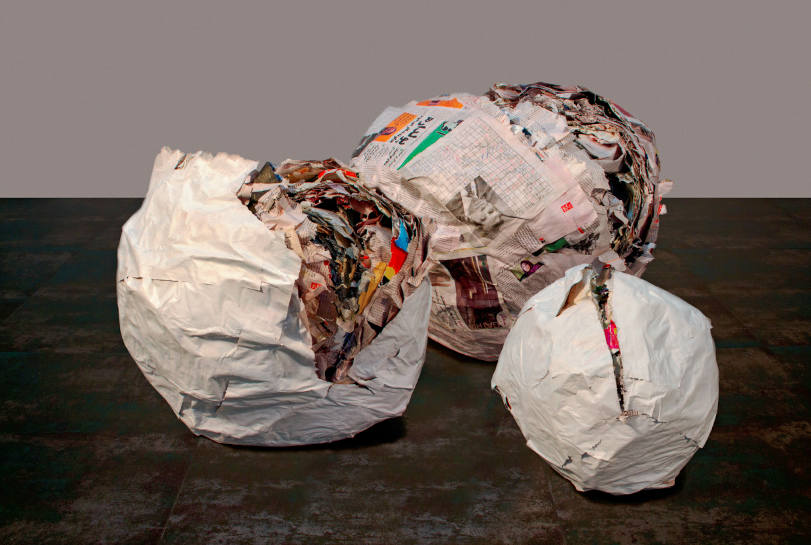 Archive of the Livings: Globes, newspapers, varied in size

“After my husband was accepted into a medical residency in Chicago, he gave me a bag of books he’d been using to study and asked me to get rid of them,” says Hussaini. “I looked at them as an important piece of our lives and started playing with them in my studio. The text of papers I use has since become important. It’s not just a material but also a message.”

One of her favorite pieces Archive of the Livings is not a particularly happy one but is no less poignant. Made in 10 days, the oversize sculpture is covered with layers of newspapers in the shape of a grave to convey the idea that citizens of a country in political turmoil often feel like they live in a cage.

“They are alive, but nobody hears from them,” explains Hussaini. “When you stand back, you don’t know if they are really alive or dead. The exhibition was not for sale. I destroyed it afterward. I wanted people to just think and touch and ask questions.” 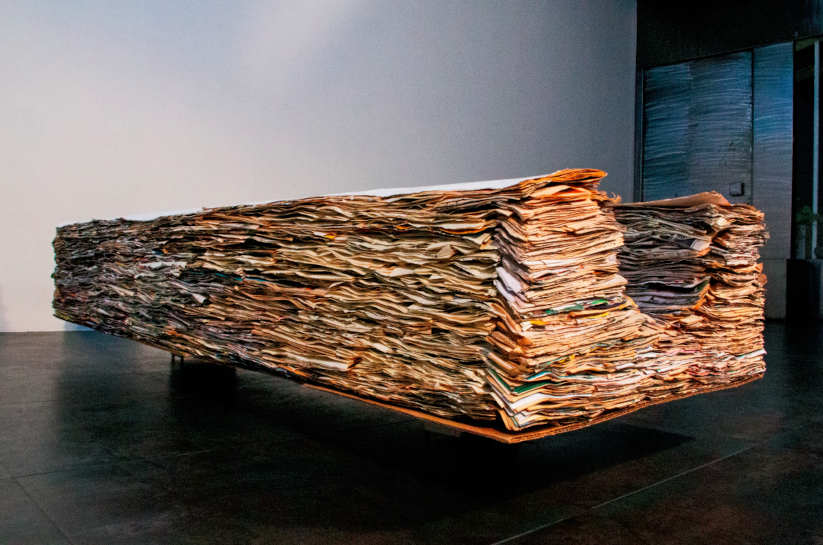 She says her inspiration comes from shared human experiences and the commonalities and sufferings between all of us, regardless of environment or cultural upbringing.

“I was born in the United States, but my parents decided to move back to Iran,” says Hussaini. “It was impossible to return to the U.S. on a visa because of the war, so we moved a lot. I constantly had culture shock and was always learning. When my husband and I returned to America, it was the same story. That’s when I first became interested in thinking deeply about what we as humans have in common instead of just telling my own story.” 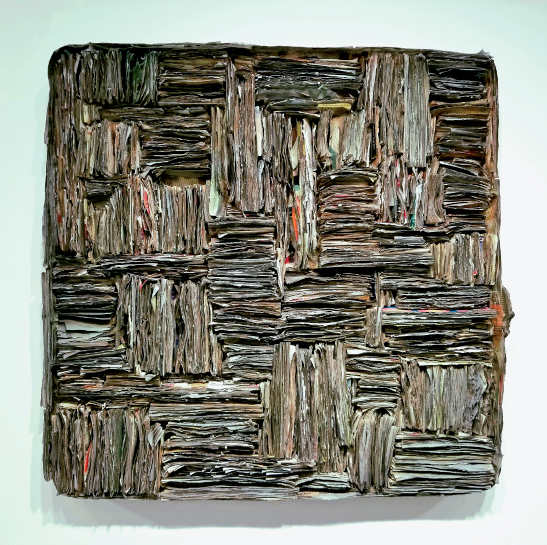 Civilization, newspapers on foam board 36” x 36”

To that end, Hussaini is a curator and board member at Theatre-Y, a Chicago based theater company; on the art gallery advisory committee for the Wadsworth family gallery at Lewis University; and is co-founder of the Didaar Art Collective, an Iranian artists community, dedicated to creating a community for Iranians in Chicago.

In 2019, they hosted an event in partnership with the Museum of Contemporary Art Chicago to pay homage to the life and work of Iranian filmmaker Abbas Kiarostami, and it served as a forum to share art and discussion between Iranians and non-Iranians alike.

“There are a lot of stereotypes about Iranians, and people’s understanding of Iranian culture is influenced by political issues,” says Hussaini. “Creating this community has allowed us to share needs, backgrounds, and experiences and to make connections without considering political barriers. What I most enjoy in creating art is meeting new people.”

Most recently, Hussaini has been studying what shelter means, thinking particularly in terms of refugees and those without a home. In September 2022, she will debut a solo exhibition at contemporary fine art gallery Oliva Gallery in West Logan Square. She hopes, through her work, to connect her previous experiences with new observations.

“When I take a moment to just breathe, I make art in a different way,” says Hussaini. “I dream about raising awareness and inspiring people to think deeply, even if they do not enjoy my art. Art is how I enjoy my life.”