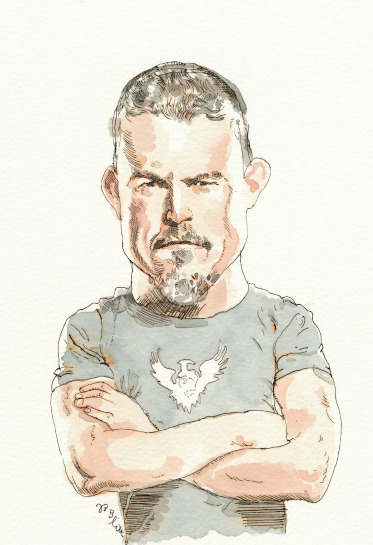 Former Army Ranger and private security contractor Kris “Tanto” Paronto had spoken at a 9-11 event in Nebraska this year when an Air Force veteran—blinking teardrops—approached.

He had one question for Paronto, a post-traumatic stress disorder sufferer and a part of the CIA security team that responded to the terrorist attack on the US Special Mission in Benghazi, Libya, on September 11, 2012, helping to save more than 20 lives while fighting off terrorists from the CIA Annex for more than 13 hours.

Two members of the team, Glen Doherty and Tyrone Woods, perished that night.

“When does the pain go away?” the Air Force veteran asked Paronto.

“Brother, it doesn’t,” Paronto, 50, replied. “But use it, in a good way. I’ve been in your shoes. You can’t forget what you saw and heard, how you felt. It’s important to accept what you did. Be astounded,” he continued, “at what you got to experience and accomplish.”

Paronto’s audience of one at that moment was no longer crying.

“He was smiling,” recalls Paronto, who lives in Kansas with his wife, Tanya, and their three children (ages 6, 13, and 16). Among a slew of other post-military endeavors, he serves as a motivational and public speaker, a gift he has shared since the movie 13 Hours: The Secret Soldiers of Benghazi—based on the 2014 book 13 Hours: The Inside Account of What Really Happened in Benghazi he co-wrote with Mitchell Zuckoff—hit theaters in 2016.

As we honor Kris Paronto and other heroes for life on Veterans Day this month, Paronto can’t help but think about another federal holiday, the one that’s observed on the last day of May each year.

“Memorial Day, to me, is a lot like Veterans Day,” says Paronto, who served four years in the US Army, reaching the rank of Sergeant, before becoming a commissioned officer in 2003. “I remember those who sacrificed their lives while working in the line of duty for all of our country’s great military branches. It’s a proud day, Veterans Day. But it’s also a day I honor people we lost. It’s not about me.”

Paronto visits the Chicago area at least once a year to teach a course to police officers at The Compound, a shooting range in Crete. The most ardent listeners of the Battleline Podcast (co-hosted by Paronto and Ian Scotto) hail from northeastern Illinois each year, Paronto notes.

“Chicagoans and those living along the North Shore are passionate people,” he says. “Always have been. And every time we’re there we’re treated well. We love it there.”

“I learned quickly that you don’t get better in sports by showing up for regular practices,” Paronto says. “It’s what you do after practices, the extra stuff you do on your own, that makes you better.”

What initially drew him to the military, as a senior in high school, was a paperback in the library. One day a browsing Paronto saw Charlie Rangers, written by Don Ericson and John L. Rotundo, on a shelf and grabbed it. It was about the biggest and best Ranger Company in Vietnam.

“I read it and associated war with romanticism,” Paronto says. “There was that ‘cool’ factor, jumping into a jungle and getting picked up later by a helicopter. But there’s more to the military than that. Much more. War is the ultimate competition. It’s a test—the ultimate test.”

Paronto and his CIA Annex security teammates did all they could to ace that test in Benghazi nine years ago. The attack became politicized afterward.

“I was angry at the start of my motivational and public speaking career,” Paronto admits. “I’d lost my way a bit. But in 2018, I let my anger go. I’m a Christian, with a deep faith, and my speaking became more about inspiring, overcoming adversity, and helping people find better versions of themselves.”

What has never been altered is the number of regrets—zero—Paronto had as a soldier.

“Many civilians do a double take when I tell them that I wish I could deploy again,” Paronto says. “Most veterans understand.”