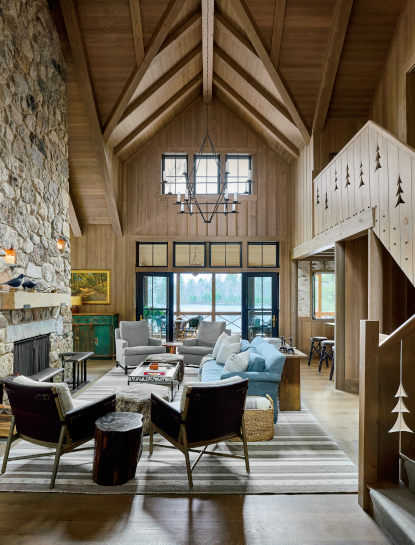 Chicago-based interior designer Frank Ponterio received a call about three years ago from a dear friend of more than 25 years, who asked if he’d be willing to reimagine their North Woods Cabin. Located within a private club in Northern Wisconsin—what Ponterio describes as a “multi-generational kind of place”—the now 4,000-square-foot log home sits on a plot of land surrounded by five lakes.

“The owner and her sister are close family friends, and I had been a guest at the existing cabin for years, so I was already familiar with how it worked,” says Ponterio. “They gave me total freedom and even let me pick the extended team, and even better yet, pick my own room there, too.”

The only requirement? The club is open from Memorial Day through Labor Day, a period during which time construction within the premises stops, so the client wanted the home to be finished by the late May holiday in order to take advantage of the summer season, requiring some late-night drives through the snow for early morning construction meetings. 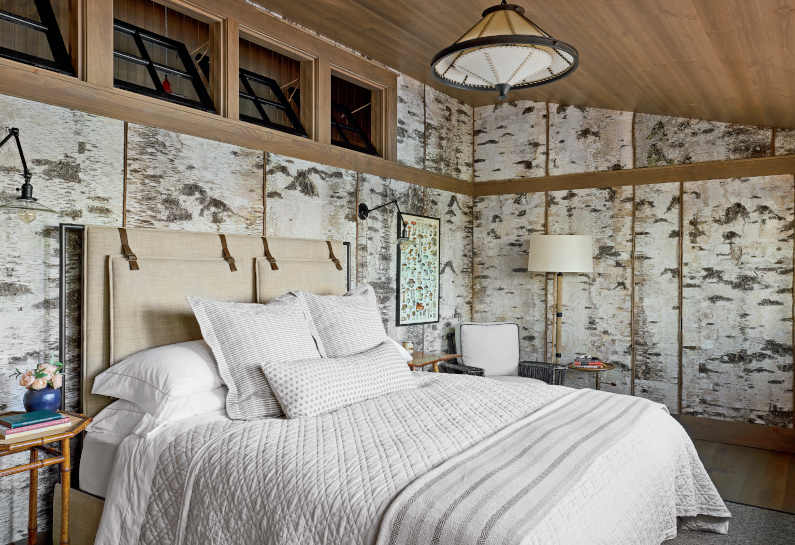 “Most of the cabins there aren’t winterized, so there are very few people around during that time of year,” adds Ponterio. “It’s about an hour-and-a-half north of Green Bay, and I’d drive up, arrive in the evening, and have to stay in a remote woods cabin on snowy nights with nobody around for miles. When you’re the only person there, you really get to know the property in a different way which impacted my design of the new cabin.”

That said, the project was “a labor of love,” says Ponterio. He and his team hit the ground running in September 2019, enlisting the help of Wade Weissmann Architecture. And then COVID-19 hit in spring 2020, so the design team made the home livable for the 2020 summer season and jumped back in immediately following. They completed construction this spring.

The home features six bedrooms, a study that can double as an extra bedroom, two bunk rooms, and three sleeping porches, all with hanging beds. To complement the natural landscape of Northern Wisconsin and the waterfront property, Ponterio and his team relied on an abundance of natural materials and finishes that could have been harvested on the premises. 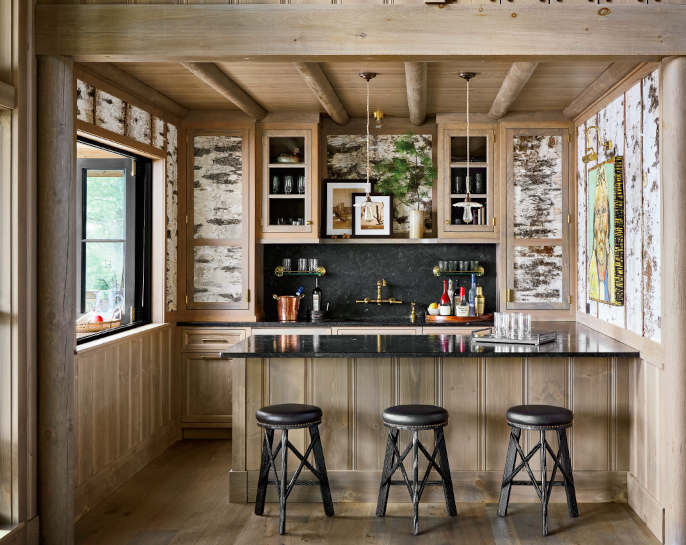 There is a subtle birch motif that runs throughout the cabin, from the guest bedroom wall paneling and the statement ancillary wall in the bar to the standout ceiling in the foyer and the decorative accents. The birch bedroom is where Ponterio calls home when he visits and thus dubbed Uncle Frank’s room by the client.

“It’s super unexpected and layered,” explains Ponterio. “A major component of our work is marrying rustic with the refined, it’s central to what I do. You can have a rustic vocabulary but execute that vision in a refined fashion by paying attention to the smallest details. Any project is the sum of its parts.” 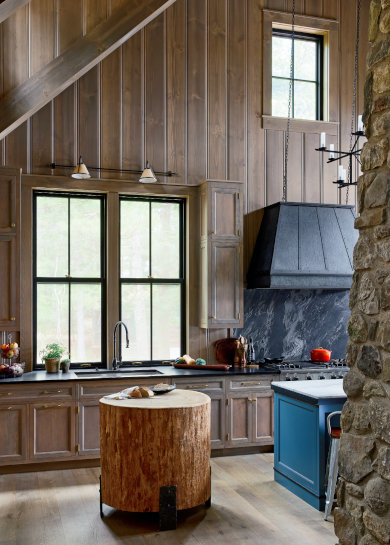 That means Ponterio sprinkled small surprises (good ones, of course) within the home, all meant to delight its occupants every time they visit. Think, for example, hopper windows on the second floor; rope-wrapped P-traps in the bathrooms; two-and-a-quarter-inch thick mahogany doors and windows; a copper roof; live edge wood exterior dormers and a stair runner seemingly attached to the flooring by hand-cut nail heads.

He also added custom Christmas tree cutouts up the main staircase so that, when the lights are on, the stairs cast Christmas tree-like shadows on the stone fireplace. Built into the fireplace are bespoke recesses for candles, each of which was hand-placed by Ponterio.

“It’s like a scavenger hunt,” he says. “I knew I wanted the house to feel particularly artisanal and camp-like. The design appears to be organic or unplanned even though everything was thoughtfully considered. The client wanted the house to last for 100 years, and it will. What’s wonderful is, because of the materials used, as it ages it’ll just get better and better.” 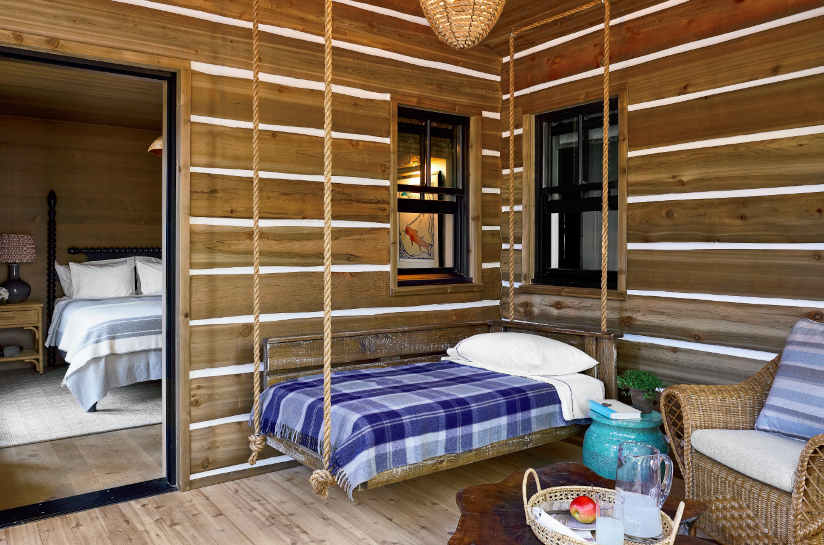 Because Ponterio was familiar with the layout of the former cabin, he was able to consider adjustments that fit the lifestyle of the family today while making the home familiar to those who had been to the former cabin. Take, for example, the former kitchenette. The club has a central dining hall—a bell is literally rung for breakfast, lunch, and dinner just like at summer camp—so most of the original structures are outfitted without a traditional kitchen and its accoutrements.

Now, the space is fit for even the biggest Thanksgiving dinner. And there’s a beautiful chopping block that’s Ponterio’s brainchild. A friend of his runs a tree business here on the North Shore and was able to source an oversize white oak log. They chopped it to size, kiln dried it, and crafted an iron base, then reinforced the floors, so it wouldn’t wind up in the basement.

“It took five men to install it,” says Ponterio. “The sisters called me when they moved in. They were having a glass of wine and trying to count the rings, exactly what I had hoped.”

But the hub of the home is truly the bar, which is central to the main seating area and porch, in the heart of the floorplan. Thus, Ponterio made sure it was well-detailed with burlap trim and nail heads on the face of its shelving, birch paneling, and accordion windows that make cocktail hour a breeze.

Ponterio also layered in fabrics from his collection with Clarence House and furniture from his line with Arteriors, light fixtures by IAESTA STUDIO and Urban Electric Co., vintage McGuire chairs, and plumbing finishes by Waterworks. Woodworker, Mike Jarvi from Crab Tree Farm in Lake Bluff created a signature “one-piece” sofa back in the great room, crafted from one piece of wood without any fasteners.

“We worked with exceptional craftsman,” says Ponterio. “The hand, fit, finish, and texture you experience when you open a door is what makes a house special. If you take some of those parts away, people might not notice, but the effect will be nowhere near as dramatic.”

Ponterio visited recently and gave a few of the neighbors a tour of the finished product, and we have a feeling his phone will be ringing soon enough. “People come to us for our creativity,” he says. “That’s the best part of a lake house: You can have a different approach when designing … a little more fun. This was a special project for me for sure, and for some of the nicest people on the planet.”