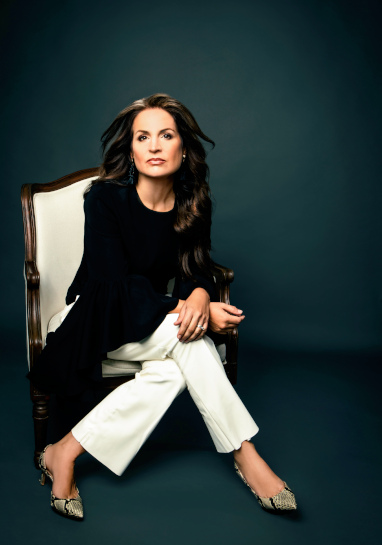 EMILY HIKADE’s aha moment came as she was heading to a small island in the Indian Ocean in 2014 when the plane she was on lost control. “As it started careening toward the ocean, all I could think about were the three little boys at home that were going to grow up without their mom,” she says. “Unbelievably, the plane corrected and from that point on, I dedicated myself to launching my own company.” Hikade founded Petite Plume—a luxury sleepwear company where snippets of her former perilous life are woven into products designed to provide comfort. That former life and career was as a diplomat specializing in counterterrorism and living overseas in the Middle East, Asia, and Africa for almost 15 years. While counterterrorism and clothing don’t typically go hand-in-hand, Hikade discovered parallels—being both a diplomat and a business owner requires a certain amount of grit, perseverance, and resiliency. She says that she was highly influenced by the sophisticated and minimalist styles she was exposed to while living abroad. Petite Plume offers luxury sleepwear for infants through adults. Not surprisingly, as founder and CEO of Petite Plume, Hikade takes a “powerful and prepared, not pretty and perfect” approach to running her business, which is now a multi-million dollar company experiencing exponential growth. She credits all the pioneering women that blazed the trails ahead of her for bringing her inspiration and determination. Not one to rest on her laurels, she says: “But there is still a lot of work to be done.”

Petite Plume luxury sleepwear can be found at select luxury retailers, including Neiman Marcus and Nordstrom, or visit petite-plume.com.