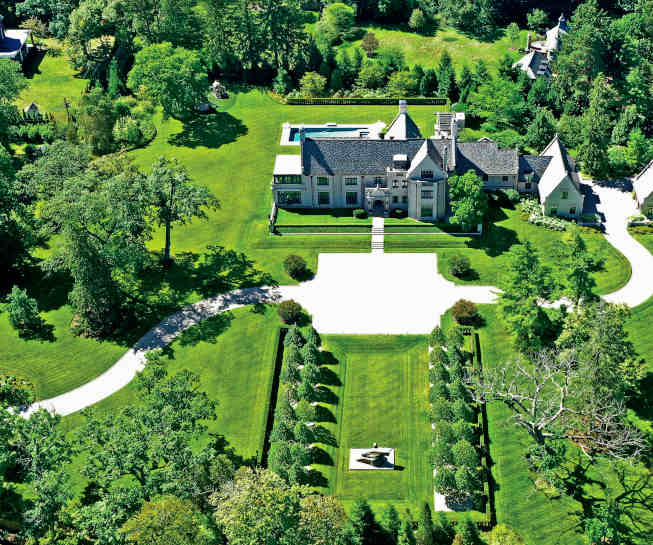 In F. Scott Fitzgerald’s novel The Great Gatsby, the irresistible and irreverent character of Daisy Buchanan was known to be inspired by Ginevra King, an American socialite from Lake Forest. She and the author had shared a young romance, and his visits to King’s childhood family home recounted mostly for the stern reception Fitzgerald was said to have received from King’s father. He was purportedly overheard saying the literary suitor would most certainly not be considered acceptable marriage material. Less so, however, has been revealed about the residence in the next chapter of King’s life, when she returned to the same suburb of her youth and wed investment banker William Mitchell in 1918. They had three children and lived in the estate on Rosemary Road up until their divorce in the 1930s, when King married John T. Pirie, Jr., an heir to the Carson Pirie Scott department store. Originally designed by local architect Arthur Heun, acclaimed for other venues such as The Casino in downtown Chicago, King’s former home was recently renovated and restored. As current owner Michelle Flynn gave a tour, she divulged her own enchanting tale of falling in love with the house and its history. 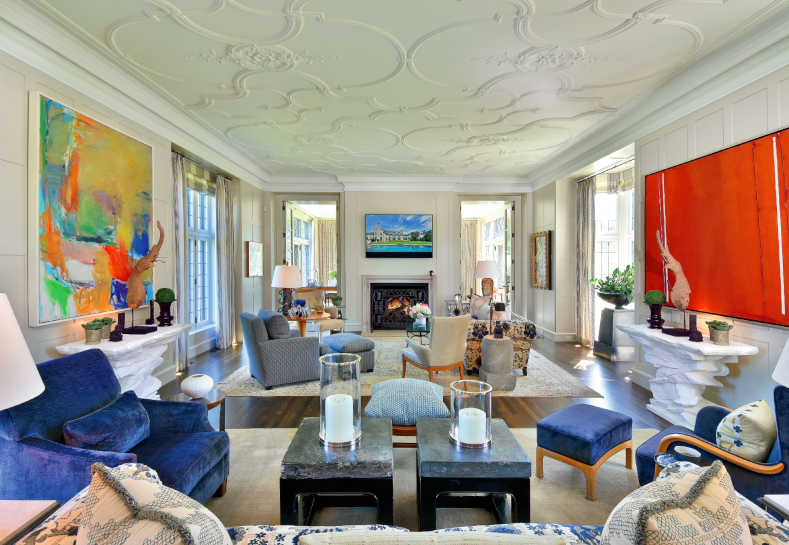 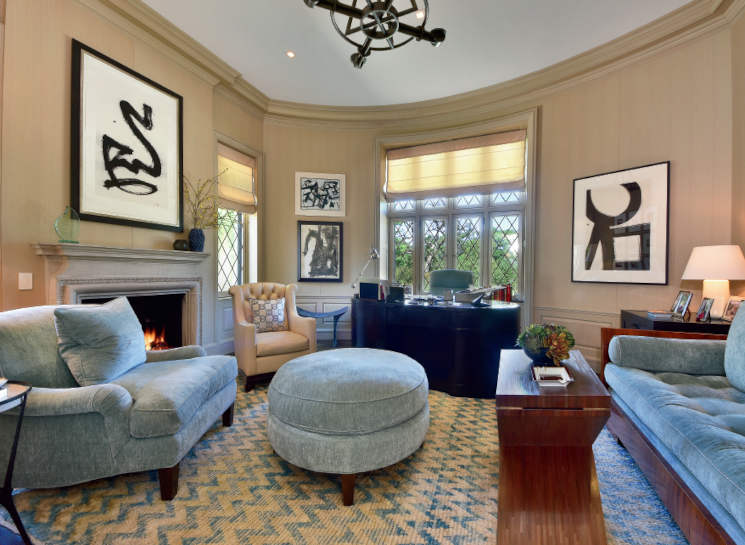 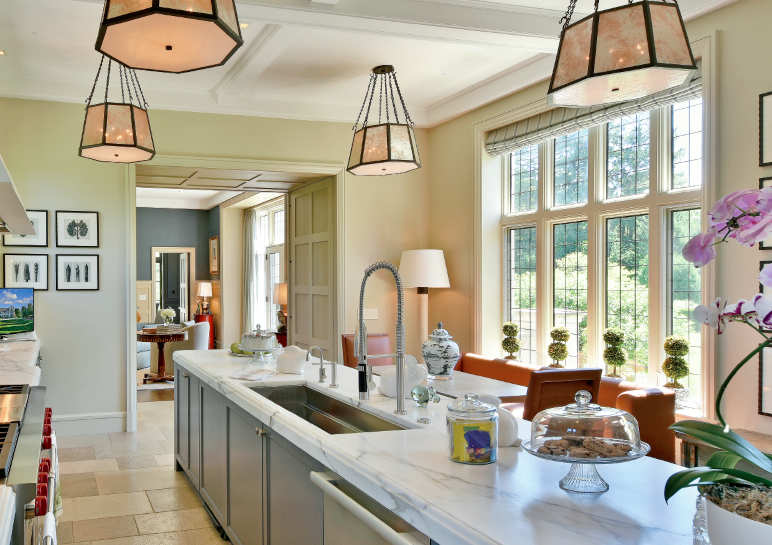 “I knew the moment we walked through here that it was the one,” says Flynn, who moved back to the Midwest from Aspen, over a decade ago, along with her husband and daughter. The couple both grew up in nearby towns, and upon returning, never intended to make a purchase that required years of work to finish. “I had many sleepless nights,” recalls Flynn, “there were lots of ups and downs trying to salvage much of the initial structure but it was important to me.” High ceilings are featured in nearly every room, and some reveal resurfaced intricately detailed moldings. Natural light sources flood in, particularly through the upstairs where private spaces have unusual features of three-way wall windows in the bedrooms. Flynn’s appreciation for Huen’s aesthetic talents and touches throughout is evident. The original lead glass has all been redone, offering expansive views of the surrounding grounds. This was an especially difficult feat in the primary bath. “It’s funny because when we arrived the entire wall of old windows was actually completely covered to make a large closet. I couldn’t imagine leaving it that way, and I’m a shopper!” She opted instead for creative storage built out of various nooks and crannies elsewhere. 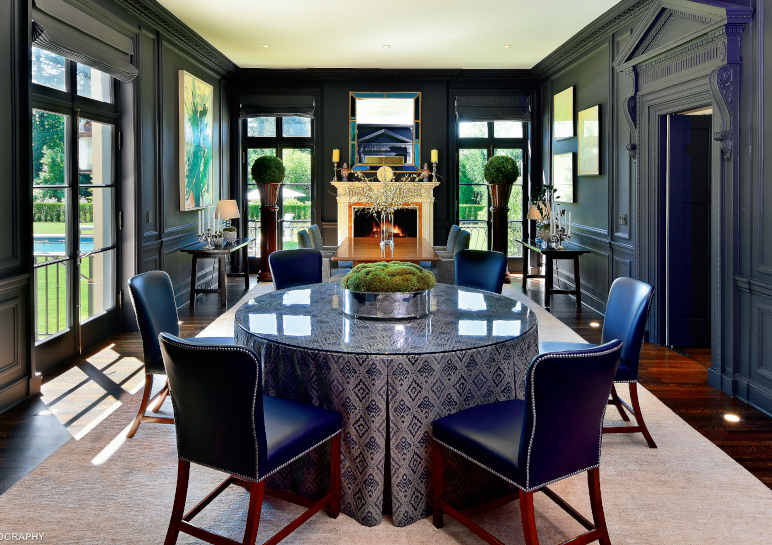 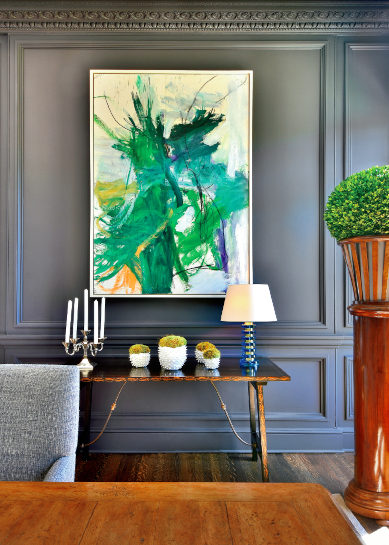 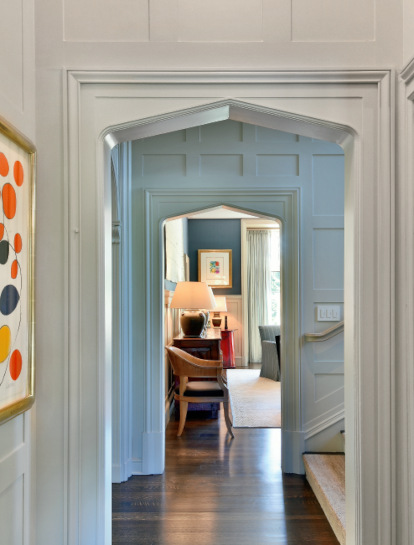 View into the foyer

“I chose the hardware for all the doors and windows over jewelry,” jokes Flynn, noting her level of attention incorporating pulls in the pantry that are typically only used in submarines. The most fun, however, was with her daughter’s room and play areas, where a mix of pastels and pretty patterns are light and bright. The movie theater is a perfect little indoor hideaway just as the young girl’s “secret garden” provides a quiet retreat outside. In Flynn’s own personal office, she selected Kentucky bluegrass to border the exterior land on one side for her view while the other end overlooks double rows of Linden trees flanking the front facade of the house and modeled after the Champs-Élysées. In that same spirit, the Flynns decided to name the home “La Vielle Maison,” with a designated plate outside the gates of the winding road leading to the main entrance. 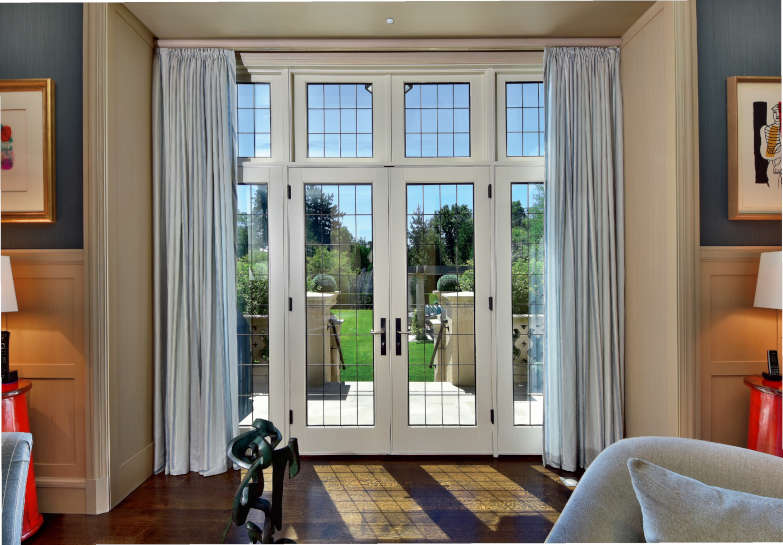 Doors leading to gardens and pool

Partial view of the Master bathroom 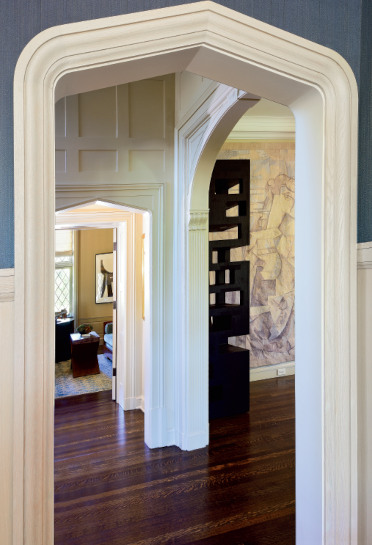 View toward staircase and foyer

Together, the Flynns are also serious art collectors and the process of interior decorating always revolves around the foundation of their modern and contemporary works. The more abstract point of views on the walls are elegantly mixed with furnishings of Art Deco, and traditional English and French styles. The firm Gregga Jordan Smieszny worked on the project with Flynn, having previously collaborated for other locations, including a city apartment. They helped make her visions a reality from the deep blue painted dining room and cerused oak library, to the imported European limestone kitchen flooring she wanted with each slab a slightly different variation.

This was the first such endeavor Flynn has taken on and she will be proud to pass down the lineage to the next tenant. “We have all learned from the pandemic that it is hard to make long-term plans,” says Flynn, as the home is now on the market with her family preparing for a move South. She feels the most fitting description of her experience is “timeless” in terms of the style, the setting, and of course, the story of Gatsby and Daisy that was never really intended to last forever.

For more information about the house, visit 901rosemaryroad.com.