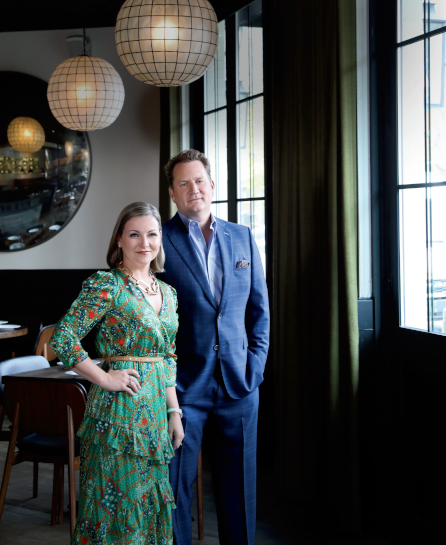 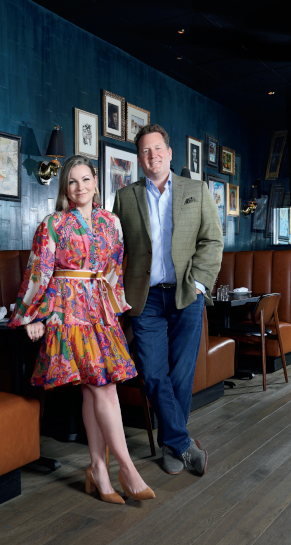 As a teen living in Winnetka, Ryan O’Donnell practically pulled a hamstring muscle each time his mother/cooking instructor, Beth, started to welcome eight cooking students into the O’Donnell household for a French culinary class.

“I made sure I was out of there before Mom began teaching,” a chuckling O’Donnell recalls. “When she taught, I golfed.”

Par for the course for O’Donnell nowadays: running Ballyhoo Hospitality with his co-founder and wife of nearly 12 years, Anna O’Donnell. Ballyhoo, founded in 2018, umbrellas a group of restaurants that will swell to six this summer with the opening of Pomeroy— a French café/bistro/brasserie/bar—in Winnetka. Ballyhoo added Sophia Steak in Wilmette amid the pandemic last year.

“Ryan,” Anna says, “loves—loves!—this part of our projects, doing all he does in the pre-opening months. As soon as a restaurant is up and running, he says, ‘Okay, what’s the next project?’ I’m the conservative of the two of us, the financial person hunched over there in the corner. Ryan is the optimist, the creative force. Trust Ryan—that’s what I’ve learned to do since we started working together.”

But Ryan insists Anna, who earned a degree in Organizational Business at the University of Illinois, is just as indispensable to Ballyhoo’s mission to execute consistent hospitality in a beautiful, warm setting at each of the eateries.

“It’s easy for me to lead the charge knowing Anna is on my side and always motivating and encouraging me; she’s the best business partner,” says the 43-year-old Ryan, a 1995 Loyola Academy graduate who, after a couple of helpings (courses, actually) at the University of Denver, found his career passion after enrolling at Kendall College’s Culinary & Hospitality School in Evanston.

“Family and friends from the North Shore,” Ryan says, “kept asking us, ‘Why not open a restaurant here?’ We listened. We’ll be forever grateful that we established a footprint on the North Shore, beginning with Sophia Steak. And now it’ll get bigger with the presence of Pomeroy. We can’t wait to open it.”

Pomeroy, set to satiate indoor diners and quench thirsty customers at 844 Spruce in Winnetka, will also offer patio space for 36 outdoor patrons at the front and 100 more at its back patio. That landscape in the back promises to be a feast for the eyes, no extra charge.

“It’ll be the best outdoor setting of all our restaurants,” Anna says.

Ryan and Anna first met when both worked for Glenn Keefer at Keefer’s Restaurant in Chicago. Keefer, a legendary restaurateur, served as a bartender at The Palm-Chicago in 1980, before opening Chicago Ruth’s Chris Steak House in 1992. He launched Keefer’s in 2001.

Ryan O’Donnell started as a sous chef there and ended up wearing all kinds of hats at the front of the restaurant, learning practically every morsel of the industry. Anna starred as a server at Keefer’s. 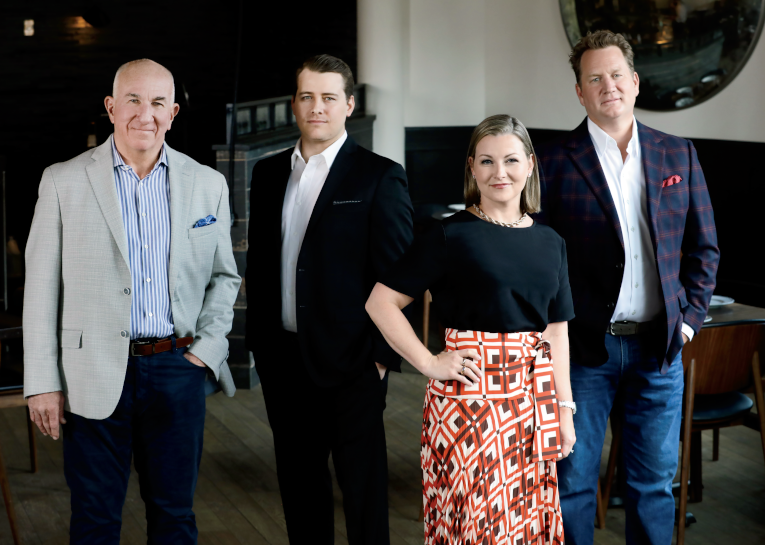 “Anna was Glenn’s favorite server,” Ryan says. “I remember him wondering, ‘If we could just clone Anna … .’”

Keefer served as Ryan’s prime mentor, through and through. Keefer saw more than a promising sous chef in Ryan, thus shifting the youngster to positions around the bow of the building without having to worry a lick about the prospect of a bumpy transition.

“Glenn has honesty, integrity, and he’s direct,” says Ryan, who welcomed Keefer as a Ballyhoo Hospitality partner before the opening of Sophia Steak last year. “I value those traits in people. I owe him a lot. He taught me a ton. He’d been a driving force on the Chicago restaurant scene for years, especially in the steakhouse world, and I stayed in touch with him after my time at Keefer’s. He loves people, loves to talk. Glenn has been a great partner and operator at Sophia and will be at Pomeroy. Not many get to become business partners with their mentor. It’s an honor.”

Adds Anna, “Glenn is all heart, all about hard work. He’s the purest character you’ll ever meet. He gave Ryan the confidence all those years ago at Keefer’s. He saw tons of potential in Ryan; he saw in Ryan what I saw in Ryan.”

Resilience and steadfastness helped Ballyhoo overcome what many restaurants could not for most of 2020 and the start of 2021. Sophia Steak was all set to throw a big party in Wilmette for its original opening on March 13, 2020. That also happened to be the date that most restaurants in Illinois had to close their doors to indoor diners because of concerns related to COVID-19.

“My worst fear happened,” Anna remembers. “All of these businesses, suddenly stopping on a dime. I’d never imagined I would have to face such a fear. We made some difficult decisions that weren’t always easy. Ryan never stopped working hard. We persevered and did not let go of one salaried employee. We were able to survive this by working tirelessly, staying positive, being willing to pivot, and looking to the future with hope.”

Among Ballyhoo Hospitality’s other fearless team members are Chief Operating Officer Jonathan Farrer and Director of Hospitality Brianne Carden, “Jon and Brianne are our co-lieutenants and have been the driving force behind Ballyhoo, operationally, and through hospitality and service,” notes Ryan. Ballyhoo recently added Director of Brands Sarah Wood, wife of former Chicago Cubs pitcher Kerry Wood and a woman who guides the group’s charitable arm with 95-mph verve.

There’s another vital cohort in the life of O’Donnell, the indefatigable and forward-thinking businessman, but she’s not on the Ballyhoo payroll. Her first name is Beth. Beth O’Donnell, the matriarch and cooking maven who unintentionally drove her golf-loving son out of the house all those years ago.

“Mom was the backbone of my cooking career,” Ryan, no longer chuckling, says. “I owe so much to her for her support.”

Visit ballyhoohospitality.com for more information. Sophia Steak is located at 1146 Wilmette Avenue in Wilmette; Pomeroy is scheduled to open this summer at 844 Spruce in Winnetka.