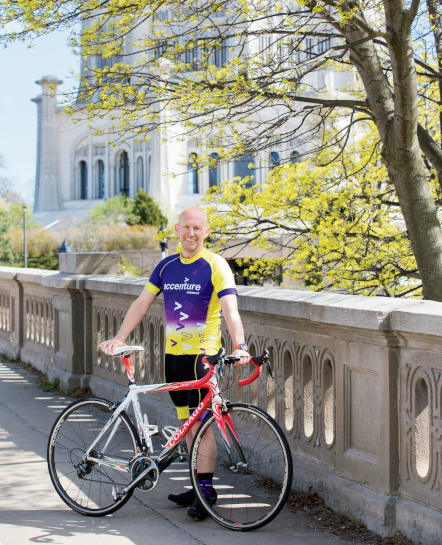 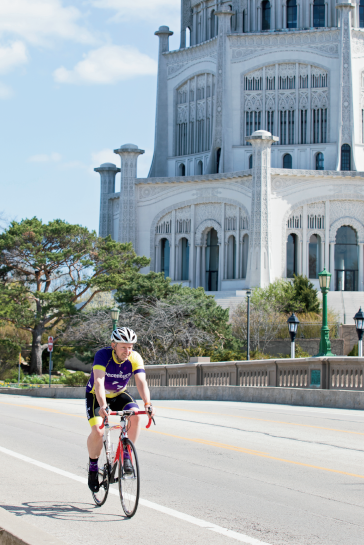 You’ve probably seen them on the road—they often travel in packs, clad in brightly colored Lycra—zipping along in formation, some closely paired, others in looser proximity, but all heading in the same forthright direction, as if on a mission. They are.

It’s the Accenture Chicago Road Cycling Club, launched just this year by Accenture’s Midwest Market Unit Lead, Lee Moore. Most Sundays, the Club meets at Montrose Harbor and rides the 60 miles up Sheridan Road and back.

Yes, it’s great exercise out in the fresh air, with a satisfying endorphin kick the reward for testing the body’s stamina. But for Moore and the other Club members, cycling is much more.

“I love the sport,” Moore admits. “It is a team sport—yet, an individual wins. But even more, I love the camaraderie and that means going farther, faster with a group of friends.”

Moore’s passion for cycling began as a young boy growing up in London, raised by a single mother of modest means. One Christmas, he asked his mum for a Raleigh Chopper, a sporty bike many a young lad at the time coveted. Two Christmases later he had his bike: a second-hand girl’s model. Moore was unphased—he loved the bike and rode it everywhere.

Hooked on cycling, Moore worked odd jobs and saved his money until he could afford a Raleigh racing bike. That’s when he decided to get serious and learn all he could about the sport—inviting himself along with a group of veteran cyclists who graciously took the young man under their wing. “It turned out the ‘old’ guys in their woolens could out-cycle anyone,” Moore recalls with great fondness. “They would even push me up the hills!”

Years later, as his career at Accenture progressed, Moore found himself working in different cities throughout the world—Cape Town, San Francisco, Singapore—and at every turn, he found camaraderie among fellow cyclists.

Eventually, Moore purchased his dream bike—a Colnago, one of the most advanced road racing bikes on the market—and began meeting fellow cyclists every year in Mallorca, Spain. The reason for the annual pilgrimage was simple: camaraderie, once again.

When Moore moved into his current position at Accenture, he brought with him the lessons of all those gatherings among cyclists from around the world. In fact, building camaraderie, getting to know Accenture people in an active environment, and supporting charities are among the prime reasons Moore started the Club.

“You get to know people on a really personal level when it’s 7 a.m. on a chilly Sunday and you’re all facing the elements, going the same direction,” says Moore.

The team building is clear. Cycling is a great way for people to connect. The cycling community is inherently communal and fellow cyclists tend to form strong bonds, whether it’s talking bike tech or sharing the thrill of completing an especially hard climb. “If you see a fellow cyclist on the side of the road with a ‘mechanical,’ you stop to help,” says Moore.

It’s also a highly social sport as exemplified by the idea of the paceline—pairs of riders leading the pack in tight formation and blocking the wind drag for their fellow cyclists. Throughout a typical ride, ideally for Moore between 50 and 100 miles, different riders will move into and out of the paceline to share the work.

For Moore, the culture is the perfect outlet for many members of his team. Already, the Club has more than 150 people registered and well over 100 cyclists—even a couple of clients—joining in the weekly rides on Sheridan Road, from the city throughout the North Shore.

Once COVID allows, Moore is also looking at the Club as a platform for philanthropy in our community, with a number of charity races in the planning stages in Chicago, along with events such as the MS 150 in Minneapolis, supporting multiple sclerosis and Pelotonia in Columbus, funding cancer research.

Moore has come a long way from his Raleigh Chopper days. But whether riding on a Raleigh or a Colnago, for sport or pleasure, business, or charity, he believes cycling has something for everyone.

“We encourage people to take care of their physical and mental health and in that sense, cycling is an absolute win-win. Some people may find this with other sports, like running or golf, but cycling has been very popular. Fresh air, gorgeous scenery, a kick of endorphins … what could be better? It’s proven to be a great way to bring people of all ages and positions—and fitness levels— together,” he says.