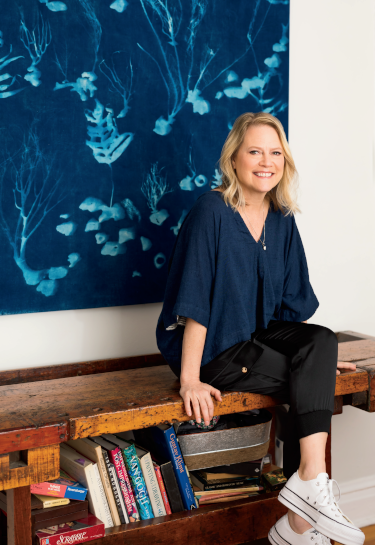 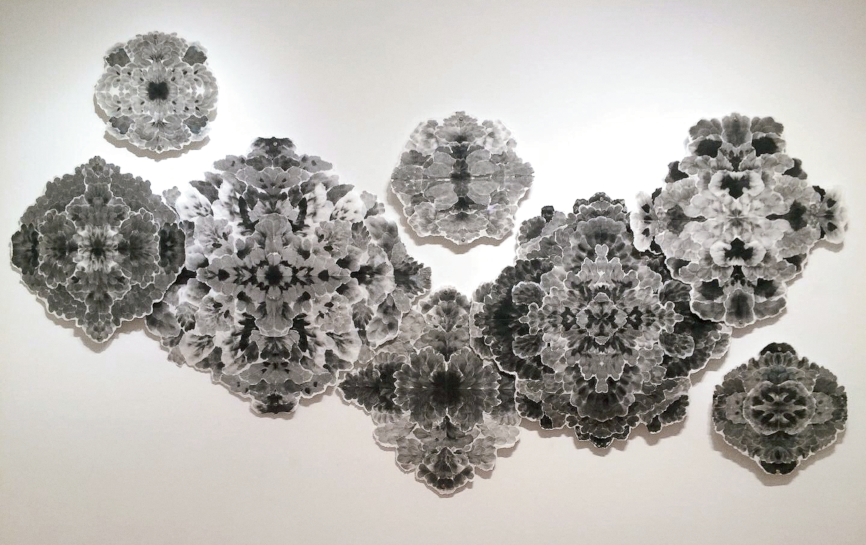 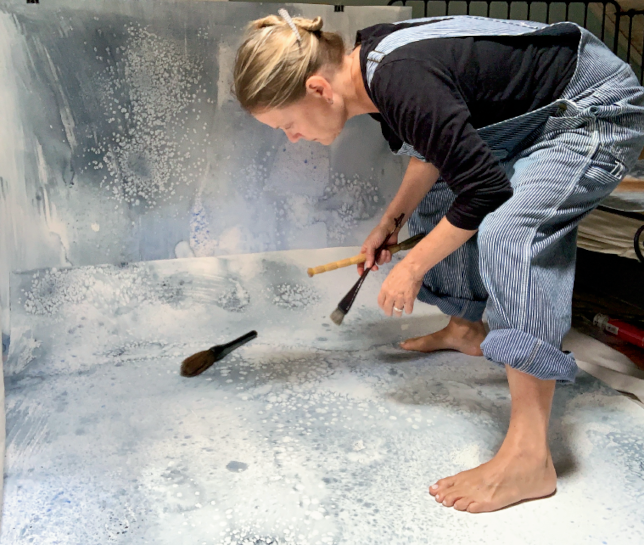 Svoboda working on Surge, a watercolor series about slowing down during the pandemic and taking time to notice our natural surroundings 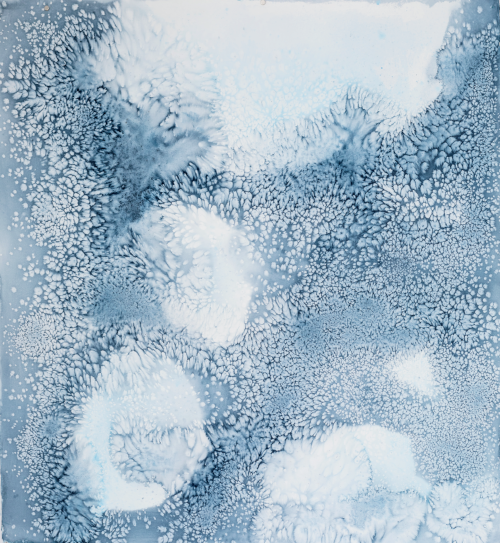 For a year in the late 1980s, painter Allison Svoboda lived on just $10 a day. She had recently been laid off from her job of four years at an architecture firm in Chicago and took the opportunity to travel the world with her now-husband. Because of their limited budget, the pair primarily spent time in developing countries, and Svoboda soon developed an interest in—and passion for—textiles and traditional women- made Indian and Indonesian craftsmanship.

Svoboda studied environmental design (hence the early career in architecture) in school but, as a lifelong painter, also pursued a minor in painting. After having kids, Svoboda rediscovered her love for art and, today, her earlier experiences abroad influence her work as a full-time artist. Finding the edge between intuitive and deliberate mark making, Svoboda’s work is a mediation on the natural environment.

Today, the effects of the pandemic have made their way into Svoboda’s newest body of work, which uses alternative materials— like water and sand from Lake Michigan, her own breath, snow, ice, wind, and rainwater—to create her signature Asian ink-inspired brushstrokes. Even moss, bark, leaves, and craggy branches work as tools.

“The Japanese have a true fondness and appreciation for nature and the changing seasons, which has had a huge influence on my work,” says Svoboda. “I’ve been spending lots of time at Montrose Beach and the Dunes, watching the migration of birds, the budding of plants and flowers, and everything coming back to life, which has been a real inspiration.”

In 2016, the Hemera Foundation awarded Svoboda with its prestigious Contemplative Fellowship in Japan. She spent a year in two monasteries and an Indigo farm becoming immersed in Buddhism, contemplative practices, and Shibori, a fabric dyeing technique. She has also completed artist residencies in places ranging from Maine and Montana to Australia and Italy.

Her first-ever residency, however, took place at Lake Forest nonprofit artists’ community Ragdale, which is located on the former country estate of famed architect Howard Van Doren Shaw, with a mix of artists, musicians, and writers. There, Svoboda explains, she first found her footing and confidence as an artist. “You simply let the muses take you,” she says.

The meditative quality of nature and its organic patterns and forms are an instinctive draw for Svoboda, who is fascinated by the theory of fractal geometry, or the infinite layer of self-similar shapes repeated in every living thing. She uses thousands of ink brushstrokes to create hundreds of small paintings, then collates the work and collages the pieces into a final composition. 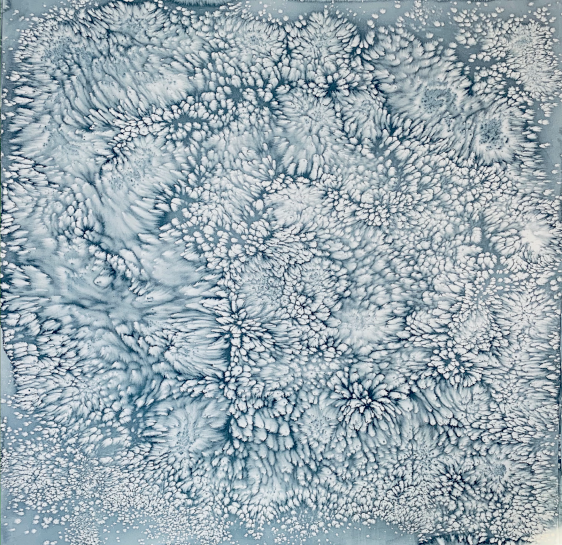 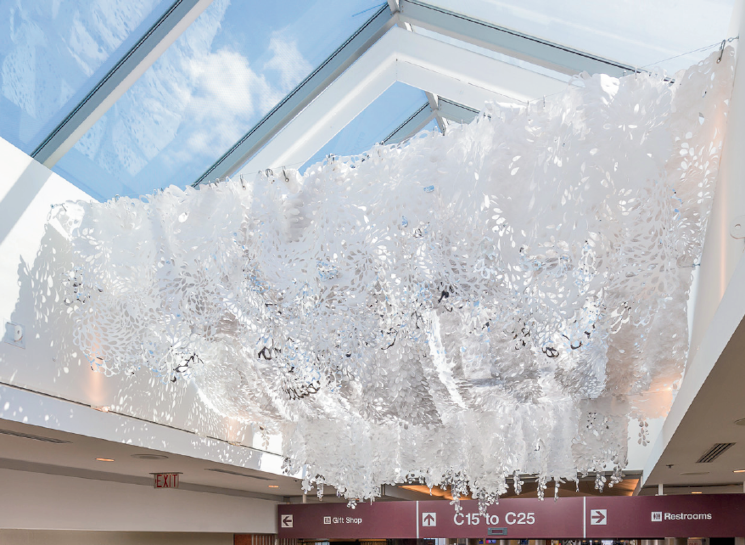 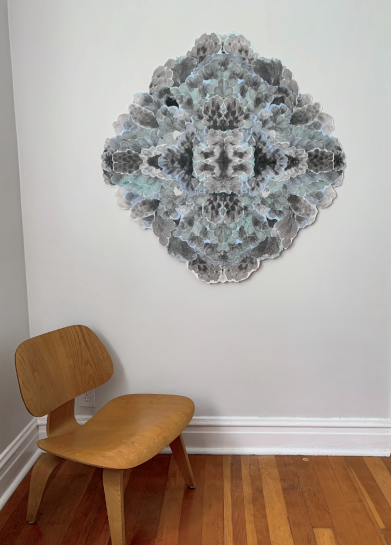 The patterns or lines of the work often have multiple inferences. Take, for example, the flow of a tree reaching toward the sun, which has the same movement as a river reaching the ocean. Water droplets bind together and become fluid just as arctic ice builds up and melts apart. Svoboda calls the dichotomy in the natural world of destruction and growth, light and dark, fear and wonder “very important” to her work.

“My work is process-oriented,” says Svoboda. “There’s a magical sort of alchemy, especially with these new larger works. It’s shifted over the last year, however. I’m very focused on what’s happening here locally.”

Svoboda works closely with the Chicago Conservation Corps of the Peggy Notebaert Nature Museum and with the nonprofit Alliance for the Great Lakes on sustainability and environmental activism endeavors, and you can often find her at a beach clean-up or prairie restoration. She hopes her latest work brings light to environmental issues and showcases the enduring power of the natural world.

During Chicago’s Year of Public Art initiative in 2018/19, each ward of the city received $20,000 to hire an artist for an outdoor installation. The 47th Ward chose Svoboda, and she created what is now a permanent Helical Om interactive stainless-steel commission for the City of Chicago at North Center Plaza. She has also worked with the Chicago Tree Project, The Carnegie Center for Art and History in Indiana, Prudential Plaza, Nashville International Airport, and more on custom public art.

Svoboda cites American sculptor Lee Bontecou as a favorite creator, and she even remembers attending the artist’s retrospective at the Museum of Contemporary Art years ago. She also calls Chicago-based sculpture artist Barbara Cooper, who also has a background in textiles, a mentor.

Next up Svoboda will be showcasing her work in the The Art Center Highland Park’s Ephemera: The Power of Impermanence and then introducing her latest pieces as the Vivid Art Gallery in Winnetka’s featured artist this July. She’s also looking forward to a solo show in San Francisco this fall at K. Imperial Fine Art gallery. “What I want people to take away is the urgency of climate change,” says Svoboda. “I believe we can all learn from nature.”