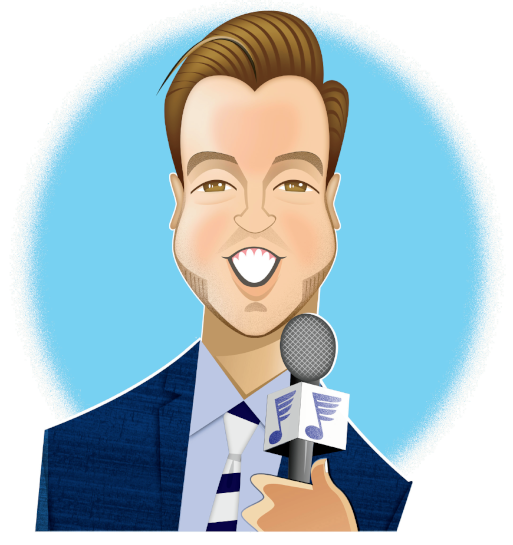 The stack of Chris Hrabe’s notes for one of his early New Trier High School radio broadcasts on WNTH neared the height of Mont Blanc. The Wilmette native was uber-prepared to talk about anything during his school’s girls’ basketball game against Fenwick High School in a state semifinal 20 years ago.

“I’ve always loved talking, but I was nervous before the start of that game,” recalls the 2004 NTHS graduate, who grew up as a “massive” Chicago Cubs fan and the oldest of Rick and Anne’s five children. “The notes I had … you should have seen them. They even included the family trees of Fenwick’s players. I was ready, so ready. That was such a great experience, getting to call a big game like that.”

“Awesome years, with exciting memories,” the University of Missouri product says of his KMOX tenure.

Today Hrabe lives part-time in St. Louis and part-time in Wilmette. The podcast The Chris Hrabe Show, launched last summer on Scoops with Danny Mac, allows Hrabe to talk with a range of heavy hitters in sports and in sports media. But what he’s particularly thrilled about now is a unique venture hatched by good friend Tim McKernan, host of a popular morning radio show in
St. Louis. McKernan, Hrabe, and two other men steer SoundStory, which produces the gift of an audio heirloom for families to pass on through generations.

Here’s how it works: Clients purchase an interview session with one of the four SoundStory professionals for themselves, their parents, other family members, or anyone, and book a time for the interview to be conducted. Hrabe interviewed a friend’s father because the friend wanted to give it to her sister for her birthday. Hrabe produced and edited the entire visit (chats last from 45 to 90 minutes) and sent his friend an MP3 of the entire interview, as well as clips of the subject talking about certain topics.

“She told me she was crying in the first 10 minutes,” Hrabe says. “Something like this impacts people in an unexpected way. It’s a wonderful, natural, authentic connection. I love having conversations with people. SoundStory gives people the chance to preserve stories through the voices of their loved ones. Some of the stories I’ve heard … they’re incredible. One client told me, ‘Wow, I’d never heard that story.’ “We think we know some people, but in reality there’s a lot we don’t know about them,” he continues. “Sometimes we don’t listen as closely as we should to those closest to us.”

The fan of talking has become an enthusiast of  listening.

One of Hrabe’s biggest fans? McKernan, who after some gentle prodding from his listeners in St. Louis, conducted a SoundStory interview with his father, who had worked in media sales for decades. One listener contacted the radio host and convinced him that the audio gift would be cherished by McKernan’s son and his brothers’ children.

Hrabe filled in periodically on McKernan’s show after he no longer had a contractual obligation to KMOX. They’ve been golf buddies for years. And now they get to team up and draw moving stories and precious recollections from folks. The primary winners are the interviewees’ relatives and the relatives’ descendants. The shelf life of each audio gift: forever.

“Chris,” McKernan says, “has a great sense of humor, ability to listen, and natural instinct to hold a fascinating conversation— traits that make someone an outstanding interviewer.” Hrabe, the interviewer, is ready, so ready, to interview people closer to home.

“I can’t tell you how cool it has been for me to be back in Wilmette,” he says. “I’m excited to bring SoundStory to the people of the North Shore.”

For more information, or to book a SoundStory interview, visit mysoundstory.com.