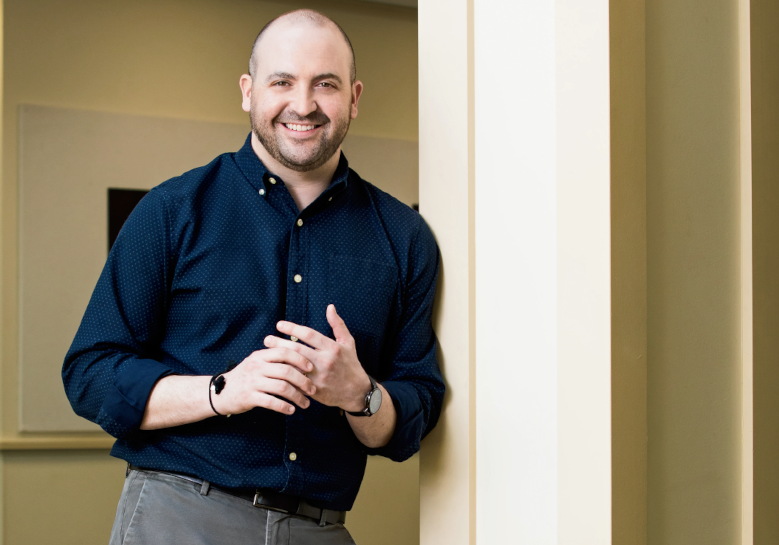 Henry, an immigrant from Vienna, Austria, changed his surname to Sheridan in 1940 after volunteering to join the U.S. Army. The history of Civil War Union General Philip Henry Sheridan—a certain iconic road along the North Shore is named in his honor—was familiar to the other soldiers at Fort Benning who planted the idea for the name change. After receiving a battlefield commission, Henry Sheridan served as an intelligence officer under General George S. Patton in World War II.

“I’m looking at the photos of my grandfather right now,” Alex Sheridan, Director of Enrollment, Marketing, and Financial Aid at LFCDS since 2018, says in a phone conversation.

“Sheridan Road,” adds the 35-year-old, “became Sheridan Road in 1889.” This was one year after LFCDS opened its doors for the first time.

“There’s a lot of history at this school, a lot of tradition,” says Sheridan, who earned many varsity letters in soccer, basketball, and baseball en route to Hall of Fame honors at The Browning School in New York City. “But, embedded in that tradition has always lived a commitment to progressive education, to constantly asking, ‘What’s next?’” Sheridan explains.

“I love being here. I love talking about the school. I knew about Lake Forest Country Day School when I was working at several schools on the East Coast (The Masters School in Dobbs Ferry, New York, and Riverdale Country School in the Bronx, New York, to name a pair). Lake Forest Country Day School was nationally revered and recognized then, and it still is.”

Two short months after Sheridan’s first day of work at LFCDS, a parent approached him and said something that would be repeated … by other parents: “Lake Forest Country Day School changed my child’s life.”

Sheridan continues to hear another refrain, often, at the 33-acre campus.

“I can’t tell you how many times I’ve heard a parent say, ‘I wish I’d enrolled my child here sooner,’” says Sheridan, who earned a degree in sociology at the University of Wisconsin-Madison and a degree in Organizational Leadership at Quinnipiac University in Hamden, Connecticut. “LFCDS helps students not only develop the skills needed to navigate a complex world and to change it for the better, but how to do it with a nuanced understanding of who they are both as learners and as people.”

Sheridan thinks highly of LFCDS’s faculty, citing their smooth transition to teaching students remotely after the onset of the pandemic last spring and—“without a playbook,” he notes—teaming with the school’s administration to establish safety protocols that allowed LFCDS to return to full on-campus learning in the fall.

“Our students and teachers took all of the necessary adjustments in stride, but this year would not be possible without the partnership we have and have always had with our parents,” Sheridan notes. “There’s a rare energy here that extends beyond the curricula and outstanding pedagogy; we’re about relationships, about people feeling a sense of inclusion and belonging in an increasingly diverse environment.”

The student-teacher ratio is an attentive 7:1, with classes averaging around 15 students. The school was one of only four schools in Illinois to be named a Microsoft Showcase School, and the only elementary school in the state to have received the designation. Even the young students boast a clear, confident speaking voice, in part because students in the early childhood program receive ample opportunities to practice and refine the essential skill of public speaking in a safe and supportive environment.

But don’t think for a second that LFCDS students only learn and grow in a classroom setting. Boy from one ZIP code sits down for lunch. Girl from another ZIP code joins him.

Boy and girl talk. And listen.

“Our students,” Sheridan says, “are learning as much from each other as they are from our teachers.”