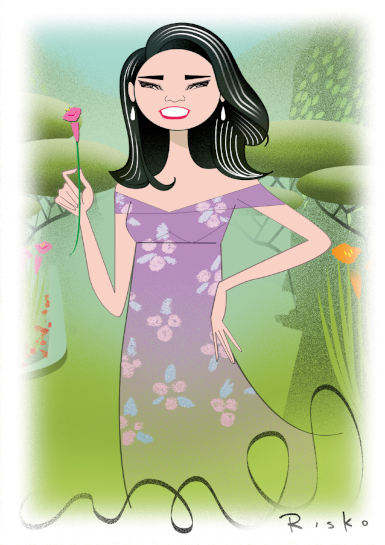 Scholarship, style, and solace are some of the many apt descriptions for Dr. Carrie Rebora Barratt. Until just the past few years, she had made a life-long career exclusively at The Metropolitan Museum of Art, starting as a graduate student intern, rising to Curator of American Paintings and Sculpture, and ultimately Deputy Director of Collections. In 2018, she leapt from a museum of art to a museum of plants, becoming the first woman CEO and President of the New York Botanical Garden, where she immersed herself in horticulture and botany for two exciting and rewarding years. During the pandemic, she decided to take her interest in art and nature to the next level. At the beginning of 2021, she launched The Solace Project, a website with the tagline “Art and Nature change my mind” offering a weekly subscriber newsletter (thesolaceproject.org) comprised of writings, workshops, and more on art, botanicals, and their restorative potential.

The mission is to engage in close looking, whether the subject is a painting or a walk in the woods. At a time when, studies show, most of us are anxious to one degree or another, concentrating on a work of art will have a calming effect. And we will learn something new by getting curious about things we see for the first time. Each week, Barratt picks a particular work of American art and gives readers a virtual tour, as if we were all standing in front of the picture together. For example, a recent subject was Grant Wood, famously known for his 1930 work, American Gothic, housed at The Art Institute of Chicago. While most focus on the Midwestern farmer and his daughter in the foreground, few have taken note of the blooming begonia and sansevieria in the background. In another instance, Barratt considers Lilly Martin Spencer’s painting Kiss Me and You’ll Kiss the Lasses, from 1856, and the fruit bounty presented on a table in front of the central female figure. What recipes could such a combination of ingredients create? To share that discussion with readers, Barratt enlisted the expertise of author and The New York Times former food columnist, Mark Bittman.

Born and raised in Chicago, Barratt’s spirit of adventure and curiosity was instilled from an early age. “I was the oldest of five children, and my mom would take all of us downtown to spend a day wandering around The Art Institute, and I would be so disappointed to have to miss school,” laughs Barratt. “I guess it made quite an impact after all!” Her mother, Joyce Rebora, is a local painter and sculptor represented by Vale Craft Gallery in River North, and Barratt’s late father, too, returned to drawing in his retirement. After attending Regina Dominican in Wilmette, Barratt pursued art history studies with a BA from the University of Illinois at Chicago, an MA at the University of California at Los Angeles, and a Ph.D. from the Graduate Center of The City University of New York. Among these and other accomplishments, she is also a marathon runner and triathlon competitor. It is that feeling of always being on the go that has made her realize the importance of taking time for family, friends, and greater thoughtfulness about the things that matter most in life.

“I decided to approach the onset of the pandemic as if it were the gift of a sabbatical,” says Barratt, “a chance to refresh and reflect.”

When she had organized notable exhibitions at The Met, such as John Singleton Copley in America, Gilbert Stuart, and Thomas Sully and Queen Victoria, it was historical, presidential, and royal figures that often took center stage. In rethinking portraits, she wonders about “traditions of representation that carry on from earlier times to the present, from oil on canvas to images on Instagram, so that no likeness can only be taken at face value.”

“Curators display works of art to tell stories,” explains Barratt, “but I have learned the importance of asking questions, blending expert knowledge with public inquiry. As I moved into leadership roles, I applied that skill set to my work with staff and visitors, listening more carefully and talking less.” Similarly, a shift from still-life to a real-life study of plants not only further sharpened her eye, it deepened her perspective on Mother Nature as the finest artist of all.

Given Barratt’s focus on humanity and healing from both interior and exterior vantage points, spanning colonial to contemporary times, it is not surprising her personal collecting passion favors tiny 19th-century medicine bottles. “I’m fascinated by the labels, shapes, and colors of the glass,” comments Barratt. That spark of intrigue for even the smallest dose of a cure is certainly a fitting patronage.