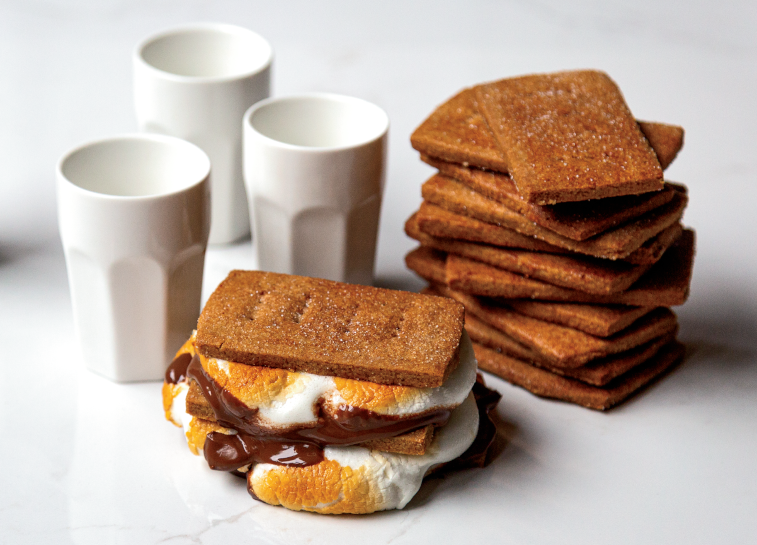 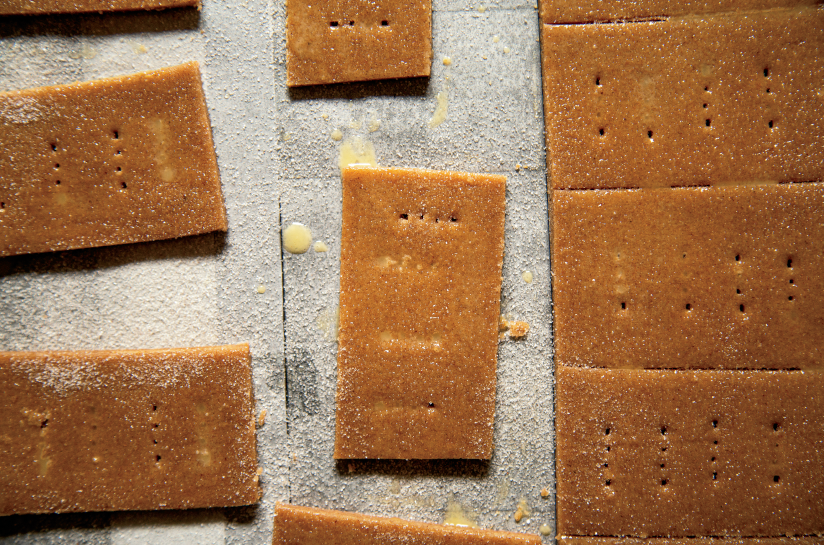 For all the firepit and S’mores fans out there, here is a delicious homemade Graham cracker recipe. To make the crackers into S’mores, sandwich fire-toasted marshmallows and your favorite chocolate bars between the crackers.

Graham crackers are named for Presbyterian minister Sylvester Graham, who introduced the coarsely-ground, unsifted wheat flour. He believed the flour could be an antidote to the poor health suffered by people who ate too much white bread. A vegetarian and believer in high-fiber diets, Graham was also a rather severe fellow who recommended “hard mattresses, open bedroom windows, chastity, cold showers, and loose clothing.”

Unlike its namesake, the cracker is sweet and can be made in a variety of ways: With dark brown sugar and darker honey, they take on a sweeter, darker flavor. Use lighter-flavored honey and light brown sugar and a lighter cracker results. I include two teaspoons of cinnamon in the dough. But you can add extra cinnamon by brushing the crackers with egg wash and sprinkling them with cinnamon sugar for a glazed, crunchy finish. Be sure to bake in the center of a preheated oven. The crackers will crisp up nicely as they cool.

For the Graham flour, try to use Turkey Red flour from The Mill at Janie’s Farm. It’s 100 percent whole grain, milled from organically grown hard red winter wheat, stone-ground, and unsifted. You can buy it directly from janiesmill.com.

Combine the two flours, baking soda, salt, and cinnamon in a large bowl, whisking to combine. Set aside. In the bowl of a stand mixer with a paddle attachment, whip the softened butter with sugar and honey for five minutes. With the mixer at low speed, slowly add the flour mixture in three parts, paddling it into the butter-sugar mixture until smooth.

Remove the top layer of parchment paper. Cut the dough into a grid of 1½ inch x 2½ inch rectangular crackers, puncturing each cracker with the tines of a fork to make three rows of dots in each cracker.

Carefully slide the parchment-backed grid of raw crackers onto a cookie sheet. Set aside.

Repeat until you have rolled out and scored all of the dough into cracker shapes on cookie sheets.

Cover each cookie sheet of raw crackers with parchment paper; place all in the freezer and freeze the dough for two hours.

Place oven rack in the center position. Preheat oven to 350.

Using a thin spatula, work quickly to remove frozen raw crackers one at a time from the cookie sheet, placing them on a fresh, parchment-lined cookie sheet and leaving at least ¼ inch of space between each cracker.

Repeat this process until all raw graham crackers are now on fresh, parchment-lined cookie sheets.

If desired, spread raw crackers with egg wash and sprinkle with cinnamon sugar.

Bake graham crackers for 12 to 14 minutes until golden brown. Remove from oven and cool.