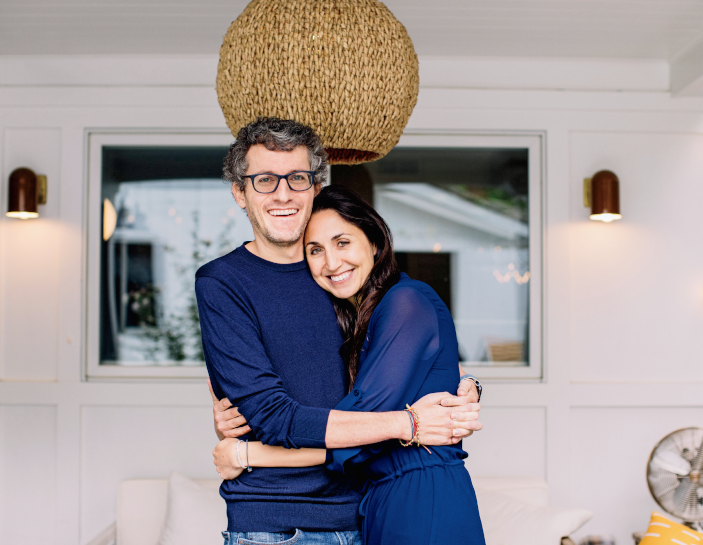 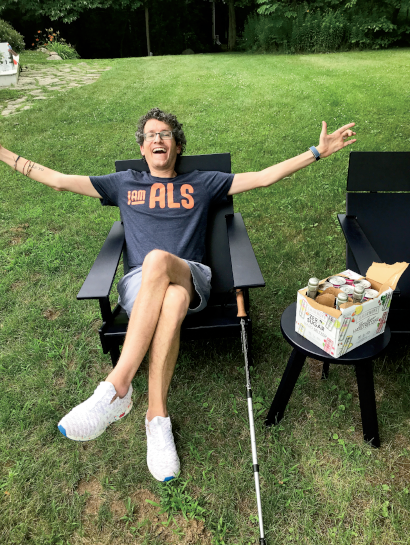 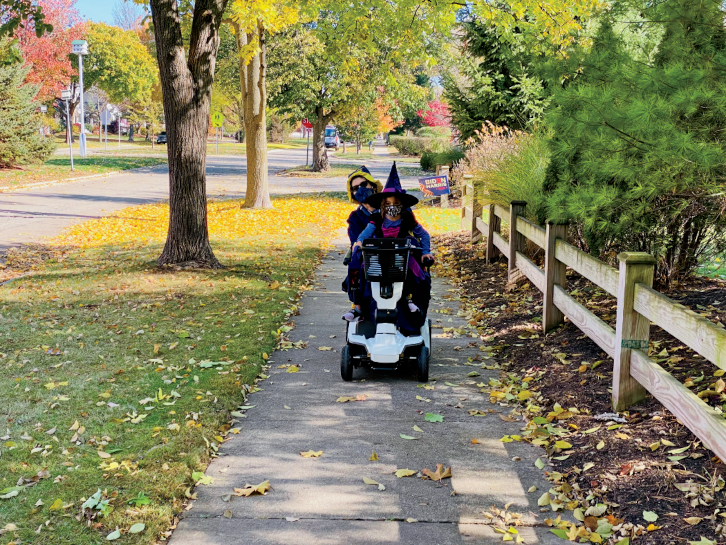 Brian Wallach was late for the first date with his future wife, Sandra Abrevaya. A good hour late. At the time, both were working for Barack Obama’s 2008 presidential campaign in New Hampshire—Wallach, as political director, and Abrevaya, as communications director.

Fielding important phone calls, including one with Obama campaign manager David Plouffe, was Wallach’s excuse for his tardiness.

He entered the restaurant, looking left and right. An attentive waitress pointed toward the patient woman at the table.

“You had better be worth the wait,” the waitress told Wallach.

“He was,” Abrevaya, a native of Wilmette and a New Trier High School graduate, says today.

“And he apologized,” she adds.

Now a married couple living in Kenilworth with their two daughters, ages 3 and 5, Wallach and Abrevaya have resolutely and indefatigably refused to sit back and wait for a cure for amyotrophic lateral sclerosis (ALS, or Lou Gehrig’s disease). Wallach was diagnosed with the terminal, progressive neurological disease in 2017 at the way-tooyoung age of 37.

In early 2019, they launched the nonprofit I AM ALS with the verve of a pair running a spirited political campaign a month before an election. Patient-led I AM ALS aims to create a community of support for people who are diagnosed with the disease while raising awareness and funds for research. In the time since its inception just two years ago, I AM ALS has assisted in quadrupling a federal ALS research program, driving an increase of more than $83 million in federal funding toward ALS treatments and cures. The movement, heralded by Wallach’s and Abrevaya’s election campaign-style acumen, also has had key successes during a very divided political climate—and amid a pandemic— in driving bipartisan support for a new bill that passed in December 2020 to give financial dignity to those living with ALS as well as introduced new legislation with immense Congressional support to give access to critical treatments.

Whenever Abrevaya discusses her husband’s condition, she never says, “When Brian was diagnosed with ALS … .” Instead it’s always, “When we were diagnosed with ALS … .” Countless members of the North Shore community—family, friends, friends of friends, Wallach’s colleagues at the law firm Skadden, and strangers—continue to shower Team Brian and Sandra with their support in a variety of ways.

“The North Shore community has rallied around us, is taking no shortcuts, and is going to basically end ALS,” the ever-positive Abrevaya says. She notes that a Twitter tattoo challenge (Wallach has nearly 80,000 Twitter followers) raised ALS awareness and funds and resulted in the creation of tattoos now adorning Wallach, Abrevaya, and Abrevaya’s childhood friend Julia Atkin.

Wallach’s tat, inked on the inside of his right arm: “ALS YG” (You Gone).

“I’d been a city guy all my life, before moving to Kenilworth in 2018,” says Wallach, who served as senior vetting counsel during Obama’s first term and as an assistant U.S. attorney in Chicago. “I lived in New York City, Washington, D.C., and Chicago. I didn’t know what to expect in a suburb. After my diagnosis, I was worried that people in my hometown and along the North Shore would shy away from me because ALS is … different. But the exact opposite happened.”

“I will always be grateful for the kind acts that lifted my family,” he adds, his weak, raspy voice belying the steely determination he’s had to help find a cure since the diagnosis. “They’ve given me hope. They’ve given my family hope. Hope creates more hope.” 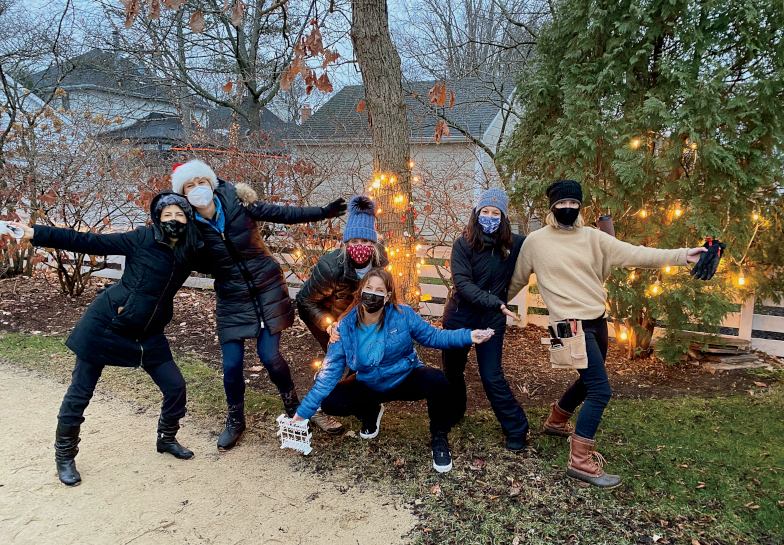 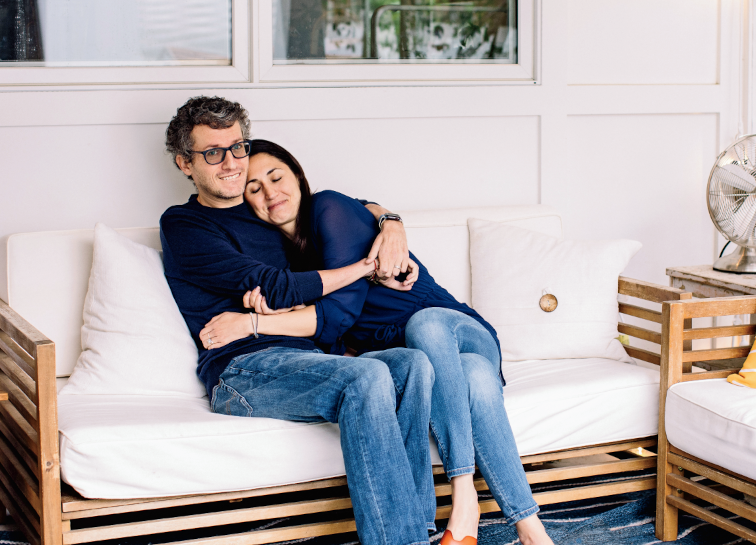 Good friend Sally Armbruster, of Winnetka, raised money for I AM ALS through her Winnetka holiday popup store, The Holiday Gal. She also organized a group to decorate the family’s home for the holidays.

“Eight amazing women, all wearing tool belts, made our house look like a magical holiday wonderland,” Abrevaya recalls. “Since our daughters could barely leave the house, given our strictness with COVID-19 and Brian’s illness, those lights were a constant source of joy and cheer.”

Their daughters’ favorite escape since the start of the pandemic has been the backyard belonging to friends and former Obama colleagues, Josh and Natalie Earnest, who now live in Winnetka. They play on the swing set while their parents work hard on I AM ALS projects. Josh Earnest, chief communications officer at United Airlines, saw to it that United added I AM ALS to its “Miles on a Mission” donation initiative.

Chuck Smith, another Winnetkan, is a partner at the law firm Skadden, which represents I AM ALS as a pro bono client and has been instrumental in helping the organization grow so quickly. In 2018 Julia Atkin’s employer, the market researcher Ipsos, undertook a survey of more than 1,000 adults on behalf of I AM ALS to assess awareness of, and knowledge about, the disease. The study found that more than 60 percent of Americans do not know that ALS is always fatal.

Neighbors got together and arranged a special trick-or-treating route for the couple’s daughters on Halloween last year.

Which was sweeter? The daughters’ candy haul or the community’s kindness?

The latter, in a landslide.

Last year Wallach’s childhood friend Brian Barrett, digital director of WIRED, wrote a moving feature about Wallach for the magazine. Its headline: My Friend Was Struck by ALS. To Fight Back, He Built a Movement. Near the end of the piece, Barrett recounts a conversation he had with Wallach.

“A lot of people (with ALS) end up saying, ‘I’m going to spend time with my family,’” Barrett says to Wallach. “And you still clearly do spend time with your kids. But you travel a lot, and you’re putting so much energy behind this (I AM ALS). How do you balance those?”

“There’s nothing in our lives,” Wallach responds, “that says we’re supposed to be here forever. We expect we’re going to get certain things in life, but we’re never actually promised them. And I was given a chance to know that there will be an end coming at some point in time. I had the option to either be angry as I went toward that end or say I’m going to enjoy this and embrace every minute that I can.”

“There may come a point down the road,” he continues, “that I get upset, but if I’m angry now I miss whatever time I have left and whatever good I can accomplish.”

For more information about I AM ALS, visit iamals.org.