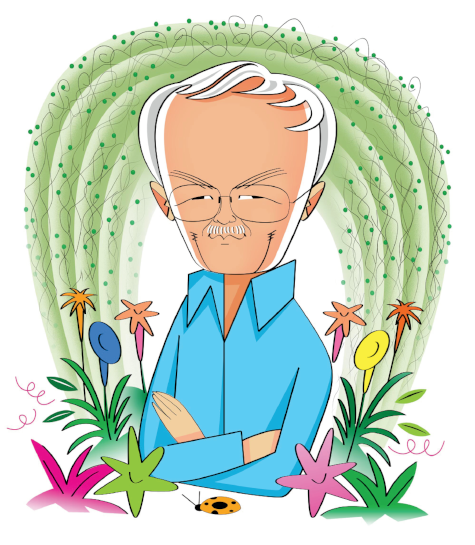 During the Kennedy Presidency, Rachel (Bunny) Lambert Mellon served as a trusted advisor to First Lady Jacqueline Kennedy on the White House interior and gardens’ redecoration. Born into privilege, Mrs. Mellon acquired a love of arts and horticulture in her youth. Marriage to Paul Mellon, the banking heir, enabled Mrs. Mellon to further indulge her passions through patronage and philanthropy, most notably through the library she built at their Oak Spring estate in Upperville, Virginia. When she passed, and the contents of her many homes were sold at Sotheby’s New York in 2014, some of the profits were used to establish the Oak Spring Garden Foundation to preserve her main residence, library, and several hundred acres of the once much larger estate. Sir Peter Crane, a well-known botanical researcher and plant scientist, is now the inaugural President of the organization.

“When I first heard of the idea, I knew that I wanted to be involved in the opportunity to build this botanically oriented study center and conservation organization from its inception,” recalls Crane. A move to rural northern Virginia near the Blue Ridge Mountains was certainly a change of scene from the more urban-based locales of his professional past. Born in Northamptonshire, England, Crane admits the place that feels most like home is Chicago. In the early 1980s, he arrived in the Midwest for post-doctoral work at Indiana University in Bloomington. Then in 1982, he was appointed to a curatorship in the Department of Geology at the Field Museum, eventually rising to Director there. In 1999, Crane returned to the UK as Director and Chief Executive of the Royal Botanic Gardens, Kew. “When I took the job, I told them it would be a limited term. I’ve learned that you want to stay long enough to make an impact but not wear out your welcome.” By 2006, he was back in the Windy City as a University Professor at the University of Chicago. During this time, he and his wife, Elinor, a Deerfield native, raised their daughter and son in nearby Oak Park. After, Crane became Dean of the School of Forestry and Environmental Studies at Yale University.

In 2016, Crane joined Oak Spring, and as he closes in on his fifth year at the helm, says it finally feels like the “end of the beginning,” with many of the fundamentals now in place and many projects coming to fruition. “Mrs. Mellon was very wisely not too prescriptive in what she wanted to have happen,” says Crane, who lives in a cottage on the property. In the main residence where paintings by artists Van Gogh and Degas once hung, exact copies have been replaced on the walls. “We have made a real effort to retain the spirit of Mrs. Mellon,” remarks Crane. “The library is one of the most prized possessions here and our intent is to find creative ways to make it available to scholars and artists of all kinds.” The former horse stables have been renovated into en suite rooms to accommodate short-term stays for fellows, apprentices, and scholars to pursue interdisciplinary studies.

The pandemic may have paused certain activities, yet along with the sixty-person full-time staff, Crane takes pride in the new resources employed to engage their community. “In the last year we have donated 21,000 pounds of fresh produce to local food banks from our small farm.” With hundreds of acres and several buildings, the plan is to be fully operational in 2022. Four times annually the estate will be open to general visitors, and during the rest of the year will offer a variety of programs in horticulture, plant conservation, organic farming, landscape design, and even photography and paper making. With anticipation, Crane feels fortunate during the past few months to have been able to reflect and strategize. “In any new organization there is always the tension between making an immediate impact, while also thinking ahead,” shares Crane, “we have been fortunate to be able to step back, put the urgent on hold, and consider what is most important for the future.” It’s a sentiment that seems fitting to nurture the surrounding nature at Oak Spring.

For more information visit osgf.org. Fellowship and residency applications for 2022 are now available on the website (deadline is July 15).