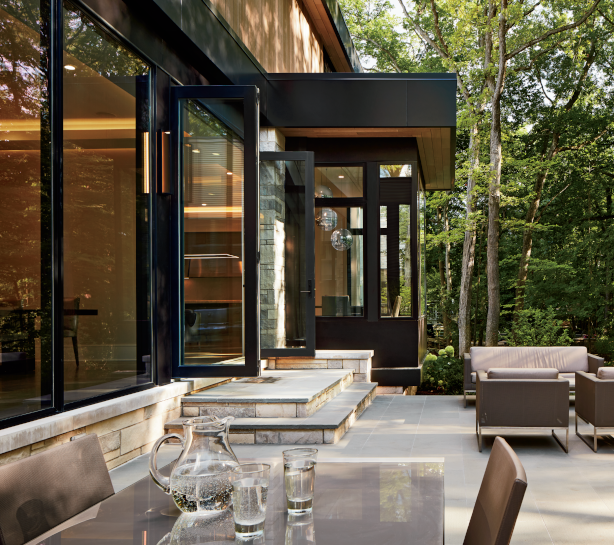 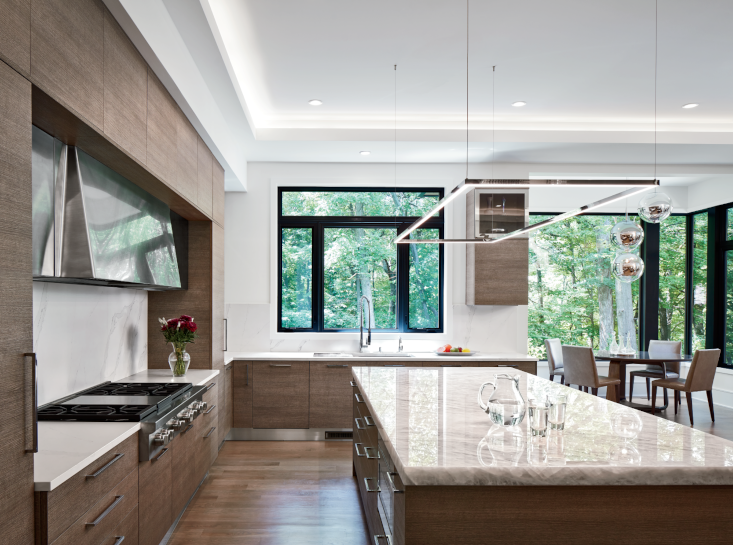 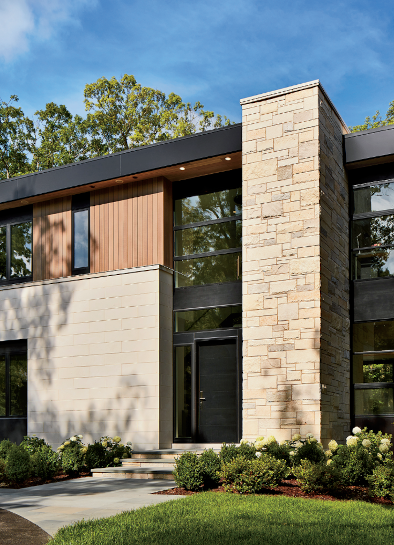 Fulton Developers’ founding principal and lead designer Mark Muller had a check in-hand, ready to finally pull the trigger on a family home in Highland Park. He, his wife Jamie, and three kids had planned to invest in a fixer-upper and renovate it to perfection; after all, Muller has been building custom homes on the North Shore for nearly 20 years, and his work has even been recognized with a Beautification Award by the City of Highland Park.

But then, that very same day, a vacant residential lot in southeast Highland Park hit the market, a unique one with plenty of privacy and breathtaking open backyard views of double ravines. “My wife and I looked at each other and, without having to say anything, we both knew we wanted to build a house there.”

Plans effectively scrapped, the couple soon embarked on a 14-month build. No stranger to the process, Muller says his passion for architecture began when he was just a young teenager. “I used to spend my free time drawing detailed homes, even on vacation,” says Muller. “I always knew I wanted to study the discipline.”

He started his career in Uruguay, earning a master’s degree in both architecture and urban planning, then moved to the Chicago area in 2002 to launch Fulton Developers, a full-service architecture, planning, design, and build company. While many firms offer either construction or design, Muller prides himself on the team’s involvement in both aspects.

Recently, his five multifamily projects helped revitalize a neighborhood near the city’s downtown, reflecting the same elegance, customization, and care as the breathtaking single-family homes Muller has designed and built in surrounding neighborhoods and throughout the North Shore.

Muller takes inspiration from his worldwide travels— he’s visited 40 countries—and touts Japanese and early 20th-century modern architecture as favorite influences. “I believe inspiration is everywhere,” says Muller. “I love visiting unique buildings and seeing in-person the work of architects I’ve long admired. I often look to my surroundings, in a combination of the broader world and the local microcosm.”

As part of that philosophy, Muller is a LEED-accredited professional and strives for eco-friendly buildings, which are energy-efficient, sustainable, and healthier. That means Muller and his team pay particular attention to the materials they use to ensure energy conservation and healthy environments for the homeowners. As a bonus, “green” building practices often lower overall expenses, too. 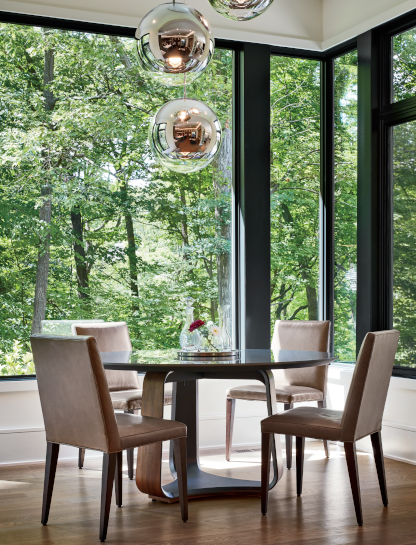 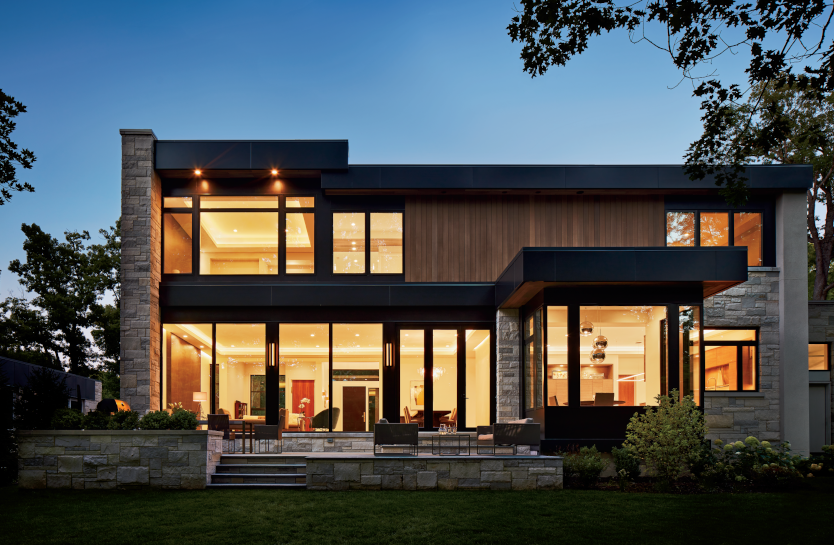 Rear exterior facade that opens up to the ravine views 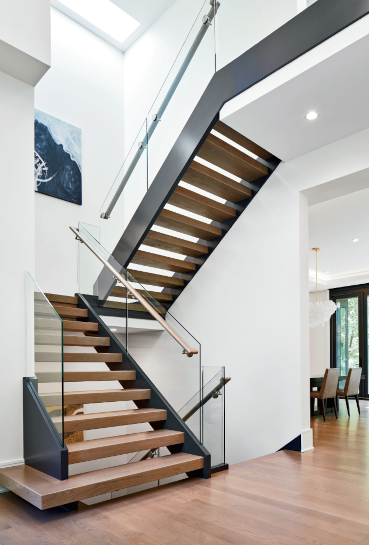 In terms of Muller’s design ethos, he tends to focus on how homeowners plan to live in the house based on their lifestyles and needs. The goal, of course, is that the client will be able to enjoy every part of their home. With that idea in mind, Muller embarked on his own project.

“I was thinking about how to frame the views, where we’d play board games, and where we could sit and enjoy meals together,” explains Muller. “Everything should have a purpose.”

Here, Muller strove to bring the spectacular exterior inside, seamlessly connecting the two spaces with views from every room and bi-fold doors that open like an accordion to create an indoor/outdoor experience. He used low-maintenance materials— like weather-resistant cladding made to resemble natural wood—sourced from across the country, spanning from Wisconsin to the East Coast and California.

While the overall aesthetic leans modern, Muller kept a warm feeling by using tones of taupe that would read much less stark than white. However, the family used warm white paint on the walls (Benjamin Moore White Dove on the first floor and Silver Satin on the second) to ground the design.

In fact, it took Muller nearly two months to source just the right colored stone for the exterior. “I became an expert on Wisconsin stone quarries,” he jokes. “This particular one comes from Eden Valders Stone. I picked it because of the cream tones.”

Then, it was another three months until their Brazilian-sourced iceberg quartzite kitchen island countertop arrived. Worth noting, however, Muller felt zero pressure to finish everything quickly, given the ongoing lockdown. His favorite space is the breakfast nook, which has windows on three sides and seems to float on the back of the house. The family spends most of their time at the Roberta Schilling-designed dining table, set under a Tom Dixon light fixture, opening the windows when the weather is nice to emulate a screened-in porch and watching families of deer cut across the lawn.

“We wanted our kids to be able to use the house,” says Muller. “Putting everything I’ve learned throughout the years into our own home was really special. In the past, the Midwest has been fairly traditional, but now people are starting to be a little more adventurous. I believe homes should represent the time they were built instead of mimicking previous styles. We always try to bring contemporary elements to traditional design.”

Muller also incorporated the latest technology to control lighting, temperature, high definition cameras, media, and music with the press of a button via the phone or an iPad on the wall.

Muller believes the focus on home brought on by the pandemic is here to stay, and he’s already seeing demand for second home offices, larger kitchens with extra storage, fitness spaces, sport courts, and home theaters.

“We added an elevator in the house for when our in-laws visit, which they have not yet done because no one is traveling,” says Muller. “Actually, no one has seen or been inside our finished home yet.”

Thank you for welcoming us!