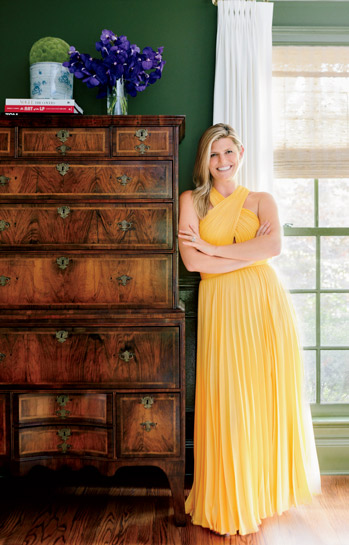 Like most quarter-life crises, that of interior designer Sarah Vaile started with playing hooky at her desk while working in advertising. At 26, Vaile had just started making a decent living but realized she, well, hated her job and wanted to instead spend time helping decorate the Palm Beach home of her parents.

“I had a panic attack thinking that I might be stuck in advertising for the rest of my life,” laughs Vaile. “I spent all day emailing with my parents’ designer when I should have been working and then decided to apply on a whim to Parsons School of Design in New York. I shocked even myself when I was accepted to the two-year graduate program.”

While in New York, the 2008 Great Recession hit, and Vaile capitalized on the chance to work with clients who were willing to give a new no-name a try given the state of the economy. Her very first win? An investment banker on the Upper East Side. 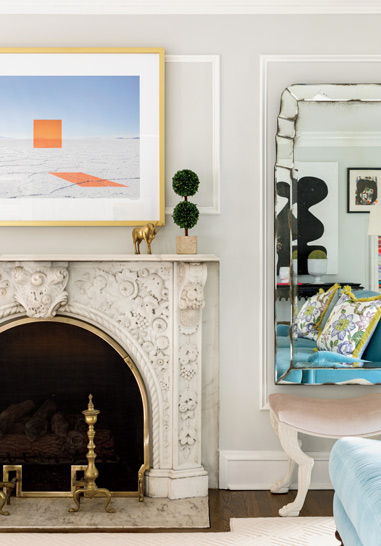 A year later, opportunity came calling in the form of a Richmond, Virginia client with a plantation plot looking to build a new home. The homeowners already had esteemed architect and builder Greg Palmer signed to the project and had heard about Vaile as a “rising star” through word-of-mouth.

“I was still enrolled at Parsons during the time but knew I couldn’t manage the scale of this project and school at the same time,” says Vaile. “I pitched doing an independent study and ultimately had to drop out and go pro sooner than I had planned.” 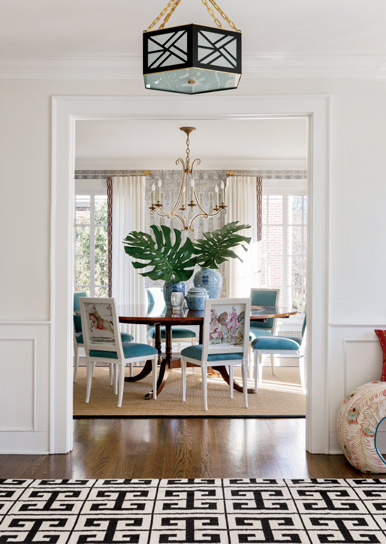 Now, the school lists Vaile as a notable alumnus (with an asterisk noting “pending graduation”). It was the right choice, however, as the Richmond project served as the catalyst for Vaile’s namesake design business. And after just two years in New York, she brought the firm back home to Chicago. 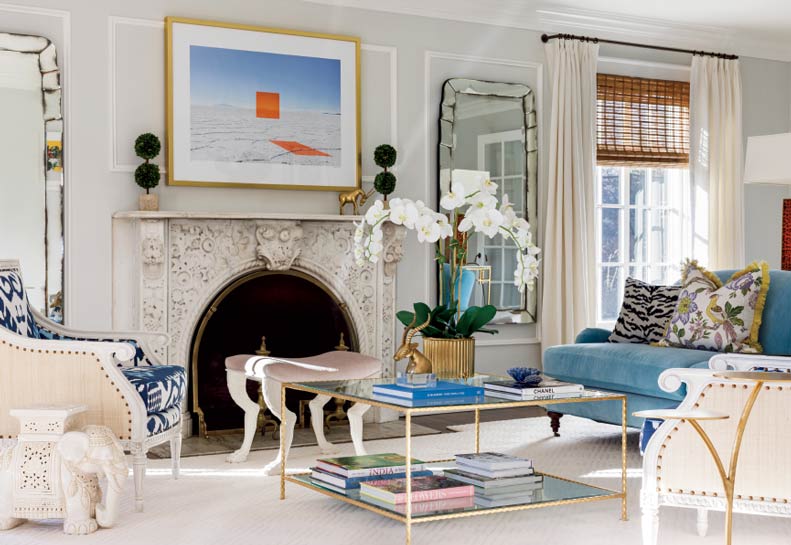 Today, Sarah Vaile Design is known for its fresh take on classic interiors. Vaile and her team gravitate toward vivid and unexpected color combinations paired with a mix of antiques and fresh new elements. She swears by Refined Décor for unique interior finds, like the three-foot-wide cement planters she just snagged for herself.

“The idea is that it’s not your grandmother’s living room,” says Vaile. “Although to be fair, I did inherit some amazing art from my grandmother, a painter. If our house ever catches fire, I’m just grabbing the paintings and the kids.” 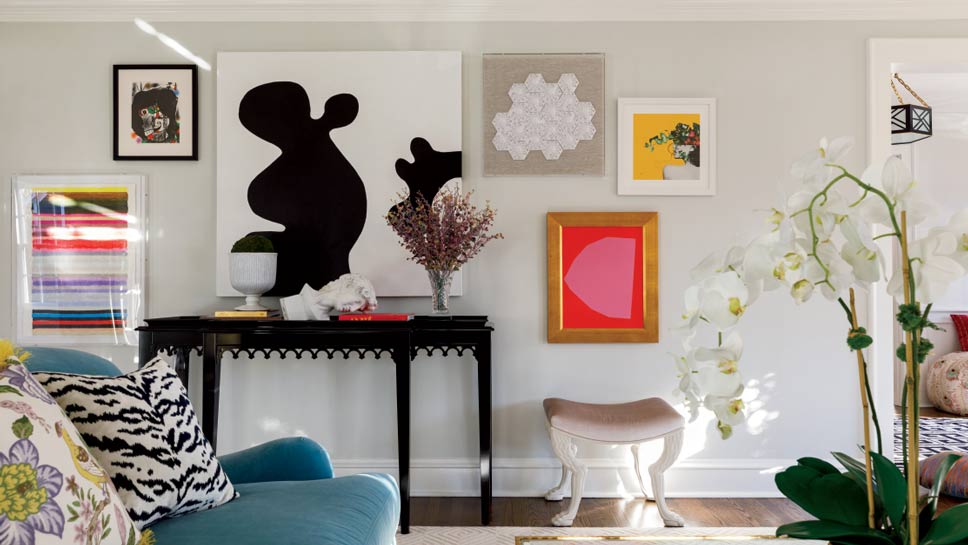 Think the powder bathroom jewel box with a color palette— Sherwin Williams Framboise— inspired by the burgundy Rolls Royce driven by Princess Margaret in The Crown that Vaile created for the 2020 Lake Forest Showhouse. To drive home the whimsical nature of the space, Vaile added a DeGournay Rousseau wallcovering, custom mosaic floor by Cambria, mirrored wall, and cheeky prints and tassels.

Recently, online vintage purveyor Chairish dubbed the Showhouse space “Best Room of 2020” in a competition on Instagram based on votes from its nearly 400,000 followers.

Vaile’s work spans from New York to Palm Beach, but she and her team just finished a project for a young family with four children in Winnetka. The client, says Vaile, gravitated toward a classic aesthetic with a softer palette comprised of white and blue tones.

“We have become known for our strong and bold color pairings, and nothing garners more attention,” she explains. “But even though people now expect pairings like a raspberry sofa with mint green walls from us, taking on a more neutral project was actually a fun challenge.” 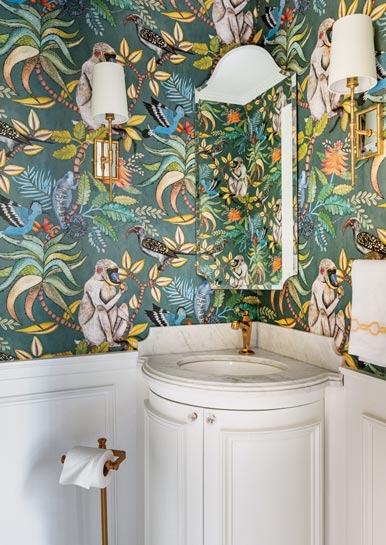 Vaile found ways to incorporate creative twists throughout the home, like with a mix of contemporary fine art featuring artists like Gray Malin and North Shore-based Kristi Kohut, textural velvet—in blush on stools that double as extra seating and in a custom blue hue on the sofa—and with two antique geometric mirrors that flank the fireplace mantle original to the home.

“The client wanted a white carpet in the living room, and it created an almost ethereal atmosphere because the room is so well lit,” says Vaile. “It’s like being on a cloud and reminds me of a Parisian apartment with the picture molding and marble details. In a climate like we have in Chicago, we have to dial up the natural light as much as possible, so I added mirrors to reflect what streams in through the windows.”

In the foyer, Vaile ironically found her signature pop of black and white with the client’s own patterned rug and then introduced natural elements, like a tortoiseshell mirror by Made Goods, to ground the décor and elevate the neutral tones. The design seamlessly flows into the standout dining room, where a bold Nicolette Mayer grasscloth wallcovering saturates the space in subtle color, and to the powder bath with a funky Cole & Son jungle motif wallpaper.

“Everything fell into place once we found the wallcovering,” says Vaile. “The dining area is really the center of the home. I believe you should learn something from every project and here I learned that a soft palette can still be show-stopping.” 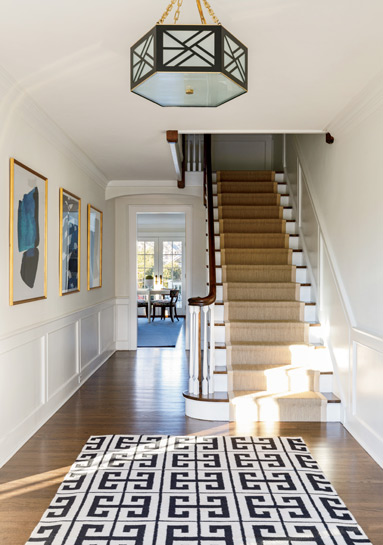 That said, Vaile thinks all-white kitchens are headed on their way out. While Vaile has always been willing to dive into a sage green or even black kitchen, she believes that oak is going to take the place of white as the most sought after kitchen design.

The ultimate win, though, is a happy client. “I showed my client the pictures of her finished house, and she said, ‘Do I really live there?’’’ says Vaile. “It was such a fun response.”