The power of Pauline Brown. 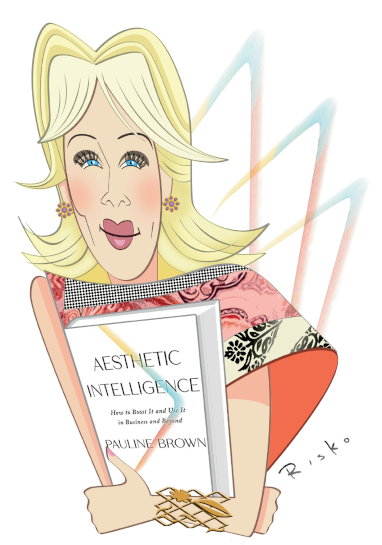 Pauline Brown is a renowned authority on luxury market masterpieces. As the former Chairman of LVMH Moët Hennessy Louis Vuitton North America, she is well-versed in assessing worth based on rarity, quality, condition, and provenance. In 2016, she made a career transition from high-end retail in corporate settings such as Bain, Estée Lauder, and The Carlyle Group, and turned her talents to academia. Her recent book Aesthetic Intelligence: How To Boost It and Use It in Business and Beyond, is based on the course she developed and taught at Harvard Business School. The program’s focus is on how to capitalize on the power of Aesthetic Intelligence or, as she calls it “the other A.I.” to unleash financial value and transform individuals and businesses.

“Aesthetics, was truly the first word that popped in my head,” says Brown, of her idea for her current teaching offered at Columbia Business School, where she is an Executive-in-Residence and marketing professor. Having overseen 70 top brands at LVMH and her experience ranging from clothing, fragrance, handbags, jewels, and watches, to wine and spirits, Brown came to see her leadership on acquisitions and building was as much in the numbers as it was in the nuances of the personality and sentiments behind selling such goods. She soon felt the industry was increasingly saturated, globalized, and lacking real identity and diversity in consumerism. “Nobody needs a new shirt or handbag or anything in the luxury sector for that matter, but what everyone needs are reasons to care, ways to express themselves, and opportunities to be inspired, engaged, and entertained.

Similar to how a museum curator prepares for an exhibition, Brown believes creative business people must employ a practice of telling a story and sharing a point of view through all five senses. Developing our aesthetic intelligence will serve us well personally and professionally. In re-imagining spaces for home, office, and school settings amidst a pandemic, she sees opportunity to find hidden benefits of an aesthetic approach. “Comfort is everything right now,” remarks Brown, “and the current shift from traditional workwear into sweats, for better or worse, may ultimately incentivize us to pay homage to other sensory stimuli.” With sustainability, purpose, and mission increasingly part of the work/life dialogue, aesthetics give us opportunity to portray those perspectives. Brown is a keen observer of how some labels accomplish this with logos and taglines, and others in more subtle and unexpected displays.

Securing a style, a combination of nature and nurture, is how Brown herself pivoted. It was while standing outside the former location of her great-grandfather’s clothing shop in Vienna, that an epiphany occurred. How proud he would be in Brown’s accomplishments, but as she notes, disappointed in the way their collective field of fashion had lost its soul. “Aesthetics is part of longevity in any small family business or large empire,” she says, having learned firsthand the way it contributes to company goals as much as the reporting financials. As author, educator, radio host (with a weekly series called Tastemakers on SiriusXM), and consultant (for car manufacturers, among others), Brown is also a coveted speaker. She has lectured at the University of Chicago Booth School of Business, is a Henry Crown Fellow at the Aspen Institute, a member on the Board of Neiman Marcus, and is about to launch a new online learning platform that will help others boost their own A.I. as well as offer a train-the-trainer model for executive coaches. “We should leverage our differences and personal experiences as our advantage,” says Brown, who banks on the adage that beauty is in the eye of the beholder and that having bad taste is still better than having no taste.

Aesthetic Intelligence by Pauline Brown is available for purchase at The Book Stall in Winnetka. For more information, visit aestheticintelligence.com.