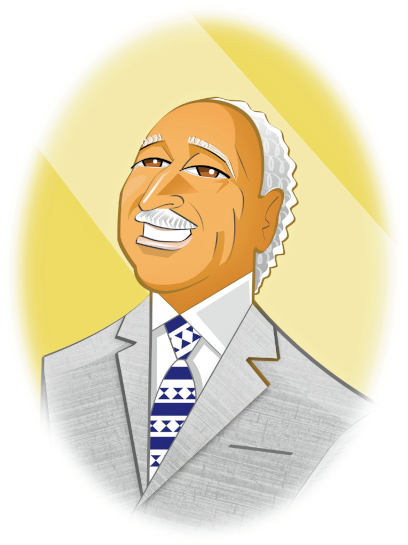 Whenever Kenneth A. Mines is anywhere near his grandsons Chase, 13, and Dylan, 11, the former civil rights attorney and forever civil rights leader must think, “Life does not get much better than this.”

Their presence brings pure joy to the 91-year-old Mines, a Highland Park resident since 1972, and a man who has vivid memories of when he met Dr. Martin Luther King Jr. and Malcolm X in the 1960s.

“I love spending time with my grandsons. They’re respectful and motivated, both academically and athletically. They love their school [School of St. Mary in Lake Forest], and playing sports.”

“They’re fantastic kids,” says Mines, who also thinks the world of his other two grandchildren, Erica Mines and CC Herndon.

Academically motivated sounds a lot like a young Mines, who was born in Cleveland, Ohio. During his formative years, the studious Mines absorbed invaluable lessons from an in-house instructor named Viola, also known as his mother, who didn’t need a chalkboard or a desk to support the occasional apple in order to teach Life 101 each year.

“My mother was highly educated, highly intelligent, and she was my spiritual advisor who would become my health adviser,” says Mines, the father of daughters Myrna Traylor, Stephanie Mines, and Karen Mines Williamson (mother of Chase and Dylan). “She became my friend—my best friend. Very loving, very influential. I loved talking with her. She taught me true values in life. She took the time to talk to my siblings and me about our family’s history and its significance.”

“Some of the most important words I’d ever heard from her were, ‘Don’t let anyone ever define you. You set your goals.’ Such advice served me well throughout my professional life.”

“I enjoyed my career and was proud to be in positions to lead,” he notes. “I was most proud of my staff and the work we did to fight for civil rights on behalf of children. I was fortunate to have had as many devoted colleagues as I had.”

Mines met Dr. Martin Luther King Jr. in Cleveland, where the minister and leader of the civil rights movement held a planning session for voter registration events. Mines found Dr. King absolutely fascinating. “When I was around him, he was open and unusually effective as a speaker. There was something about him, something special when one got face-to-face with him. We could all see it. He left me spellbound. Then, after a short while, it was time to get to work.”

Mines—whose parents, George and Viola, were married for 77 years—and his family moved to Highland Park in 1972. There, the family joined Trinity Episcopal Church, where Mines would begin serving as an acolyte; he handled thurifer duties when he was in his 80s. His late wife Shirley founded the North Shore Chapter of Jack and Jill of America, Inc., an organization of mothers with children ages 2 to 19, dedicated to nurturing future African-American leaders by strengthening children through leadership development, volunteer service, philanthropic giving, and civic duty. Karen Mines Williamson is a member of the chapter, which is one of 252 branches across seven regions.

“Highland Park is such a welcoming place, with excellent schools,” says Mines, who served on the City of Highland Park’s Human Relations Commission. “When we moved here, Highland Park was a quiet suburb, with a limited downtown. I loved Highland Park right away because of how well we were received as a new African-American family. Over time, I got to know every mayor and they got to know me and my family.”

Mines’ take on the state of the United States, post-2020 election? Concerned. Too much divisiveness, entrenched positions, and not enough demonstration of courage from politicians to stand up for issues over party. “Our country, with regard to civil rights, has come a long way, but we still have a long way to go. Civil rights, to me, are human rights. Isn’t that how we all should look at civil rights?”

Mines is also hopeful, positive, and resolute. His faith reassures him. His faith, after all, has been strong since he first entered a Cleveland church as a little boy with his family.

“Going to church isn’t an obligation to me; rather, it’s something I want to do,” Mines says. “That was my mother’s approach to churchgoing. I would not be here today without faith. Faith has carried me through.”