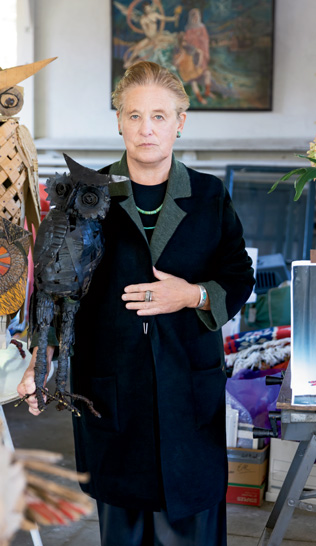 Artist Mary Seyfarth with one of her avian hybrid birds. Photography by Robin Subar. Hair, makeup & styling by Theresa Demaria

In the mid-1960s, North Shore-based artist Mary Seyfarth spent a post-graduate year at The American School in Lugano, Switzerland, a formative period she says changed the trajectory of her life.

“It opened the world to me,” explains Seyfarth. “I was away from the crushing news of the Vietnam War and I traveled extensively gaining exposure to the great artworks and architecture of the Western world.”

She would later return to The American School in 2013 as a guest artist to accept an “Alumni Honoree” award from the Ferik Sahenk Art Center. It was a well-deserved recognition, given that Seyfarth had received national attention for her skill as a potter, exhibiting internationally and attracting loyal, coast-to-coast collectors from New York to California. 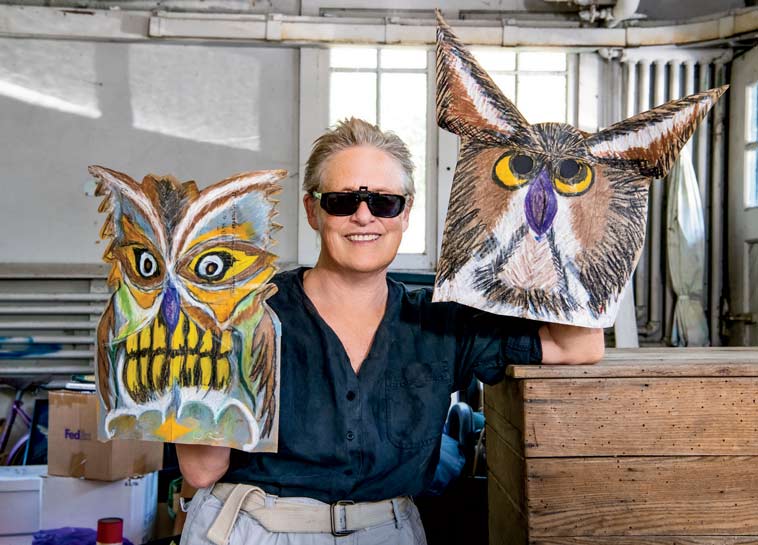 Artist with two masks in her studio

She was even appointed by the Mayor as commissioner of the Highland Park Historical Committee, served on the board of the Evanston Art Center, and was an adjunct faculty member at Columbia College for more than 30 years. All, of course, in addition to creating her evolving works of art informed by history with a classical aesthetic.

“My parents were supportive, so I was able to follow my own lead,” says Seyfarth. “I am a potter and am inspired by all creatures great and small. I appreciate the Wabi-Sabi aesthetic, which is a Japanese world view centered on the acceptance of imperfection.”

She also takes to the sky for inspiration. Her new flock includes avian hybrid bird creatures—think a half peacock, half hawk fittingly dubbed PeaHawk—made from materials like paper, cardboard, tacks, twine, wire, and an abundance of glue. Perched on a tree overlooking Lake Michigan in Highland Park are two privately commissioned owl creations by Seyfarth made of welded sheet bronze.

“Birds represent our connection to other worlds,” says Seyfarth. “They cross a lot of paths and are symbols of abstract concepts like liberty and wisdom. There is a mystery about them that everyone loves, which is what I wanted to explore with this series. I continue to be inspired by my study and published writings of the hybrid found in secular Byzantine art.” 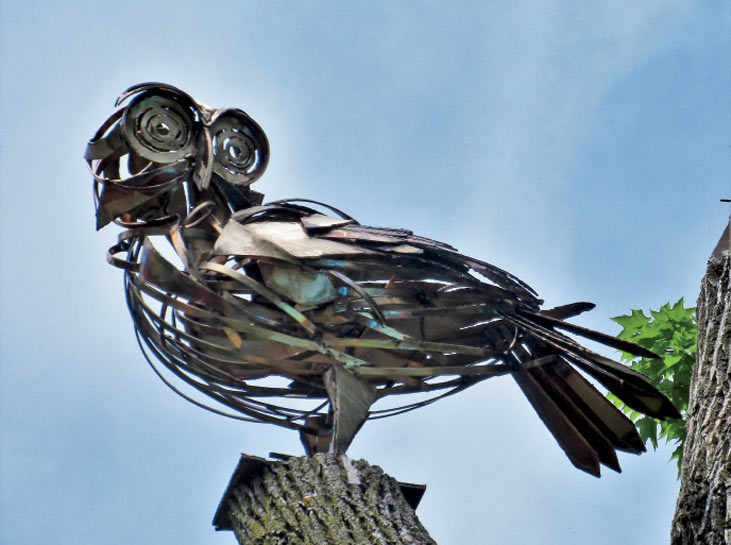 In the late 1980s, Seyfarth traveled with the University of Illinois archaeology team—she holds a Master of Fine Arts from the school—to a pilgrimage site in northern Greece, Synaxis, for the excavation of a Byzantine monastery. As Seyfarth cleaned hundreds of pot shards found within the monastery, she felt connected to the ancient Greek, Roman, Byzantine, and early Christian pilgrims who had inhabited the same site, feeling as though she could even hear their footsteps.

Nodding to classical Greek sculpture, Seyfarth then created a series of portraits of her foot made of ceramic, cast iron, bronze, and concrete. While all are made from a mold of her own foot, each is unique and is an homage both to those who have walked before us and to those who walk tomorrow. The naked foot, Seyfarth explains, is an optimistic and forward-looking message. Two facing pairs suggest dialogue while five pairs in a circle formation suggest conversation.

“I am not a foot person, but I had stepped upon hallowed ground,” says Seyfarth. “We leave our footprints wherever we go. I’m sincere about the work, but I also know it’s humorous. Humor puts all things in perspective.” 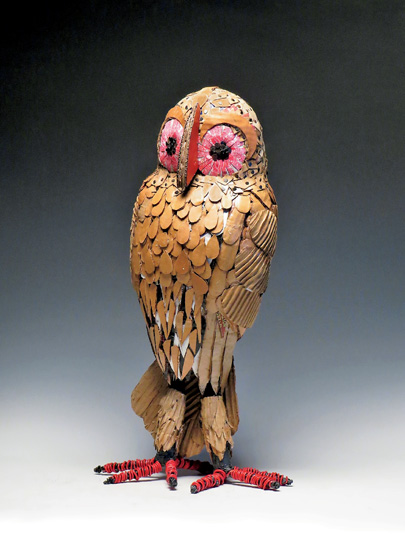 Seyfarth’s series of feet have “walked” everywhere from Greece to Chicago to New York and Switzerland. An oversize red foot was even displayed at Navy Pier, but Seyfarth says it “could not compete with the endless water and horizon.” Instead, she prefers to site her work with complementary architecture.

Last year, for a friend’s Halloween party, Seyfarth crafted a custom cat mask from a Jewel shopping bag and beat revelers dressed as Andy Warhol and Madonna to win best costume of the night. Given the ongoing pandemic, Seyfarth has continued to create creature masks for friends and family with oil-stick crayons. 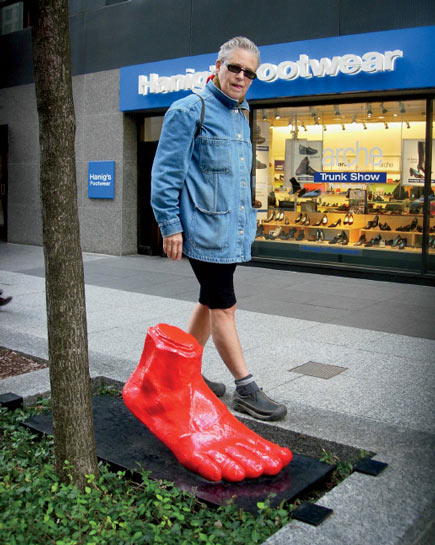 “The COVID-19 lockdown has given me uninterrupted time to dedicate to my work,” says Seyfarth. “Many breaks take you out of your workflow. Think about the beauty that resulted during the Renaissance period—they were not hindered by laundry or bus schedules. Henri Matisse’s most simple work came at the end of his life, and it took that entire time for him to achieve such a level of simplicity.” 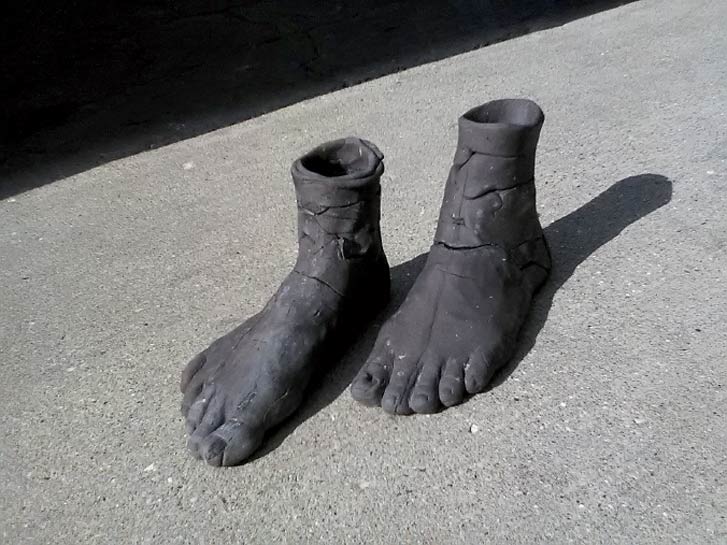 Ceramic foot made from mold of artist’s foot

Next up, Seyfarth has her discerning eye on a beaver in Wilmette Harbor. From the wood chips left behind after the beaver chews area trees, upon which you can see the animal’s tooth marks, Seyfarth plans to create an homage to the beaver in sculpture. To complete the sculpture she will use leather for the beaver’s substantial tail.

Seyfarth recently downsized, moving to “The Cassita,” a coach house to a grand Prairie style Wilmette landmark built in 1902 and owned by the Shea family for over 40 years. Here Seyfarth continues to create in her new space.

“I bike a lot and think spending time outdoors really advances your physical and mental constitution, so I am outside as often as possible,” says Seyfarth. “But I did just buy a MacBook Air from Apple, and it is so gorgeous you’d think I bought it from Tiffany & Co.”