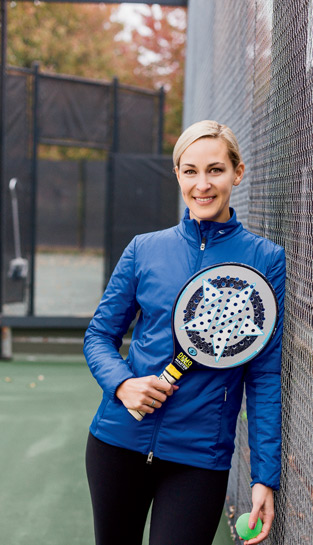 Audra Billmeyer, a former Division I collegiate tennis player at Vanderbilt, recalls the first time she stepped onto a platform tennis court. It was during a maternity leave and she had not picked up a racket of any kind in years.

“Exmoor had just completed a new paddle hut and my husband said, ‘Get out there and give it a try,’” Billmeyer recalls and jumped into a men’s open play session.

“I felt like a chicken running around with its head cut off,” she says.

So Billmeyer took a lesson with Exmoor’s Director of Tennis and veteran competitive player Mike Rahaley, and he explained how her tennis skills could be transitioned to paddle. He taught her to hit the ball off the screen, and how finesse, spin, and strategy win points.

“I felt like from that point forward, it was a great opportunity to get some exercise, use the skills I already have, and meet more people.”

Platform tennis is the formal name of the game, “paddle” is the more common term. But to the casual observer, it’s a bit of a mystery. There are the usual questions: “You play inside a chicken wire cage?” and “It’s outside in the winter?”

Among tennis players on the North Shore, you’d be hard-pressed to find anyone who hasn’t heard about the sport. Platform tennis started in Scarsdale, New York in 1928 when an engineer named James Cogswell and his neighbor Fessenden Blanchard were looking for a winter racket sport close to home. They built a raised wooden planked court on Cogswell’s property but soon got tired of yanking the balls out of snowbanks. They put up chicken wire to stop the balls and soon decided that playing balls off the wire was a useful feature.

Historically, the sport was considered insular and mostly played at country clubs with a few park districts thrown into the mix. Now paddle clubs are popping up everywhere. The Glenbrook Paddle Club opened in Northbrook this year with the tagline “Paddle for the People” and proclaimed that paddle is “no longer just a country club sport.” It followed the cities of Wilmette, Glenview, Medinah, and River Forest that have built paddle courts and started programs. Players either join pickup games or sign onto a team and play one match a week. Each team plays within a level or “series,” and each series has 8 to 10 teams. The series currently range from 1 to 33 and encompass all player levels from those who have played tennis at the professional level to beginners.

The game is designed for winter. The court is made of aluminum planks and heated with propane—not to keep players warm (pros are quick to point this out to new players), but to melt any snow or ice on the court. The rackets are half the size of tennis rackets and are made of foam core. The face is doused with “grit,” usually silicon chips, to grip the ball. Unlike tennis, the ball is a solid foam core. When these two features combine, players can put a lot more spin on the ball than in other racket sports. Spin becomes a thing of pride—players get known for the inventive ways they make the ball jump, dart, and move. 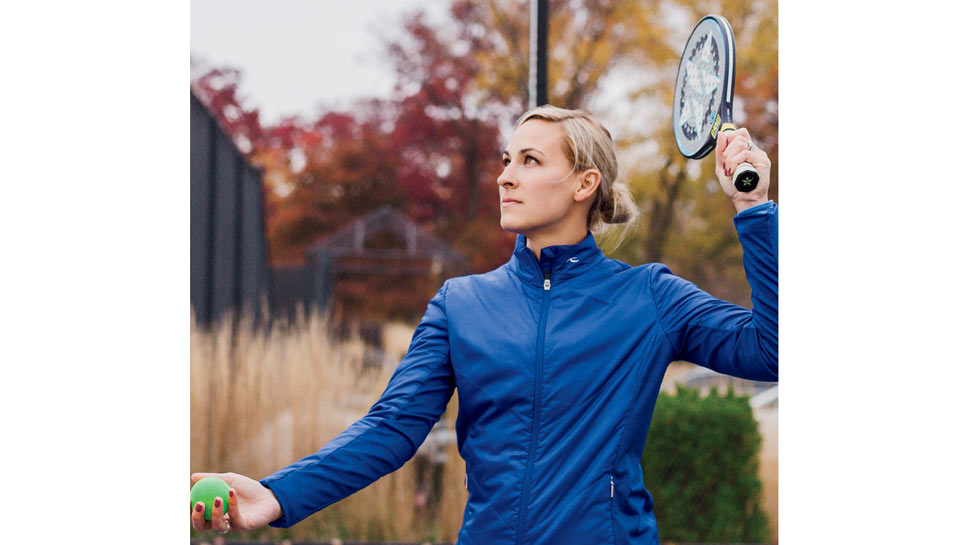 Participants play in all conditions—subzero temperatures, blinding snowstorms, and pouring rain. The ball behaves differently in various conditions. When it’s cold it doesn’t bounce as much. When it rains, it’s as slick as an eel. Above 50 degrees, the ball bucks around like a wild pony and is hard to control. Players have to adjust for different conditions. This is part of the allure.

“It’s a great overall physical workout, but also very mental,” Billmeyer notes. “You’re working that brain muscle and that can make you sharper in life.”

The mental workout lies in the process of constantly confronting obstacles and trying to overcome them while not getting frustrated, being disciplined, and living in the moment. Buddhists would love this game.

Billmeyer also sees therapy in the way players must practice the mental workout.

“It’s a great sport,” she continues. “It takes an hour of your time and you are able to exercise, get outside during the winter, it’s social, it’s healthy, it’s something you can do with the family—I don’t know of any other activities, particularly in the Chicago winter that can check that many boxes.”

She’s not alone in her thinking. Each club in Chicago has men’s and women’s teams. On the men’s side alone there are more than 250 teams, comprised of 8 to 10 players. That’s roughly 2,000 people, just on the men’s side, traveling to clubs to play. Before COVID-19, it created an economy of food, drinks, gear, and league fees. Tens of thousands of dollars were spent on matches every week. Most of the paddle huts are closed this winter, but players still huddle around coolers as they socialize while maintaining social distance after matches. Paddle, in the time of COVID-19, has become a lifeline for many players this year.

“If you haven’t played,” Billmeyer says, “My advice is … now’s the time. There are so many crucial physical and mental therapy components that can be translated into life. That’s really fulfilling and that’s life-changing.”