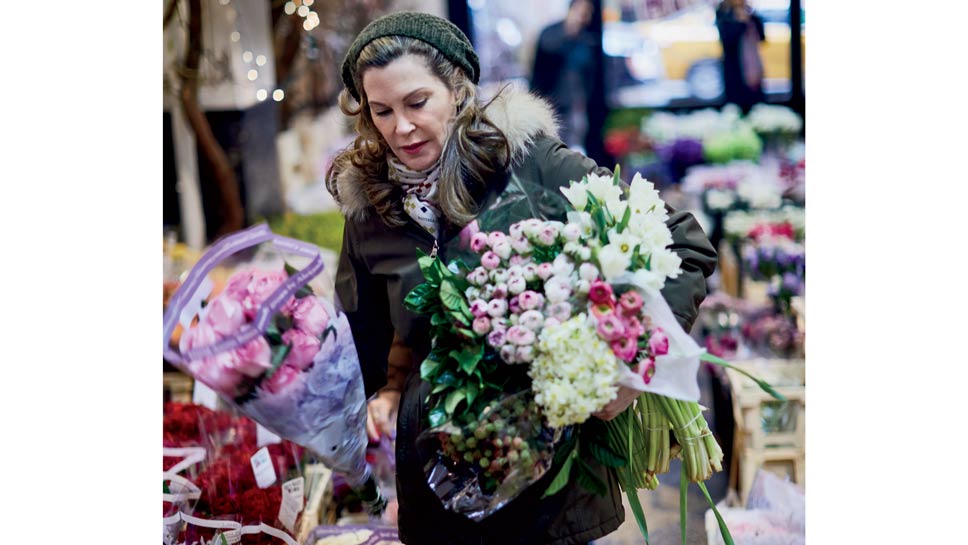 A few years ago Cathy Barancik Graham made a promise to herself to wake up every morning and sketch. She even labeled the drawings by day and date until there were simply too many to count. Graham joined Instagram and began sharing her drafts online. At the encouragement of her friend, interior designer (and author of Fifth Avenue Style) Howard Slatkin, those posts turned into a publication, Second Bloom: Cathy Graham’s Art of the Table (Vendome Press). The book is filled with beautiful images and how-to tips for seasonal designs and decorations shown artfully arranged in her Manhattan and Nantucket homes. The title of the monograph also offers insight to Graham’s predicament at the time: a long-term marriage and subsequent divorce, and her distance from an established career as a fashion illustrator. The pages reveal the way she cultivated herself and her talents back to their natural habitat. 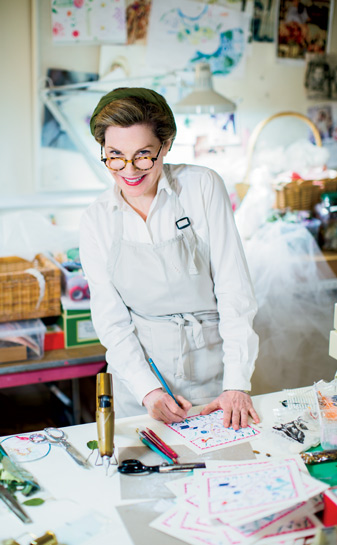 “Even in high school I remember painting on belts and selling them at a local shop,” says Graham, who was raised half-and-half between the North Shore in Highland Park and downtown Chicago. Her mother was an art teacher, and maternal grandmother, a gardener. Richard Barancik, Graham’s father, is a well-known architect and in the city, they lived at 100 E. Bellevue, a building that he designed (he is also the only remaining living member of the Monuments Men, a group that served and saved works of art during WWII). He reveled in weekends reserved for taking his daughter to museums, galleries, and special trips to Saks Fifth Avenue for a pretty outfit purchase. “My dad has an aesthetic eye,” notes Graham, crediting that vision with helping guide her own artistic pursuits. She spent four years in Providence earning a BFA in painting from the Rhode Island School of Design, and after graduation decided to follow her then boyfriend and college comrades to New York City. “I had a good color sense and liked vintage, and a friend said you’ve always loved fashion so why not go to Parsons School of Design where there is a Fashion Illustration Department?” 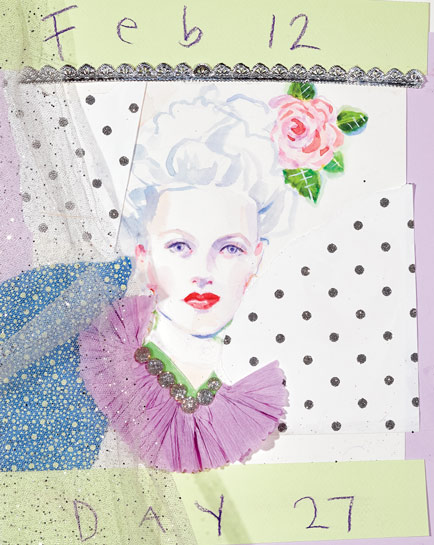 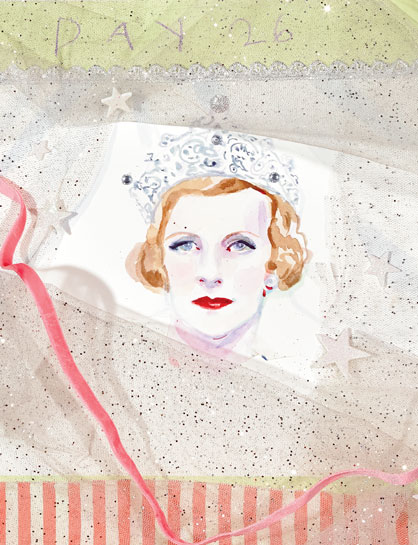 During the early days of her divorce, Graham did a drawing a day for Instagram, at the suggestion of friend Joanna Coles, former Chief Content Officer of Hearst Publications

Graham took the advice and joined the intensive program, quickly becoming a highly sought after freelance illustrator and commercial artist. Nearly every notable industry name hired her for projects, including Bonwit Teller, Bloomingdale’s catalogs, and New York and Rolling Stone magazines. “I even did these elaborate windows at Bergdorf Goodman when the show CATS premiered on Broadway,” reminisces Graham of the pre-social media mainstream days when actual visual imagery for publicity had greater demand. Then, her self-described bohemian loft-living style was complemented by savvy purchases such as her coveted Cy Twombly works on paper from Castelli Graphics. “I could only afford them one-by-one but I knew I had to have them.” When Graham married and moved to the Upper East Side, with the exception of her abstract art, she left that wilder expressive side behind. 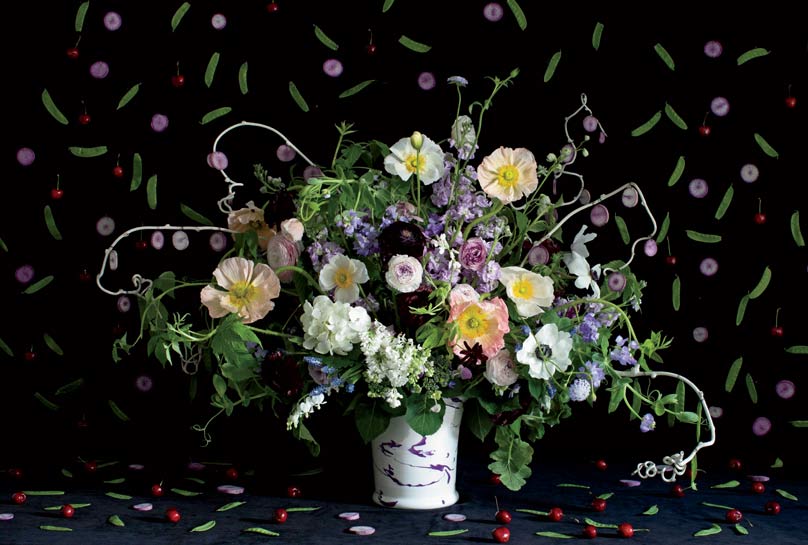 Fast-forward and the classic townhouse she has now lived in for over three decades has proven both the perfect remedy and prime canvas for her emotional and creative outlets. Graham’s dining room is one of her favorites to fancifully adorn with cleverly crafted flowers. Single stems can be traditionally laid out in a row of eBay purchased bud vases lining the center of a table or scattered au naturel on a sideboard, while garlands frame the arches of doorways, mirrors or mantels. Look closely, however, and you will surely find her signature humor and whimsical surprises amidst delicate roses and peonies. Perhaps a hidden figurine of a man or woman, a tiny dollhouse size kitchen sink and mini model airplanes tucked into the mix, or even vegetables such as deep purple radishes she cuts and loops around branches as if they were jewel-like dangling earrings. 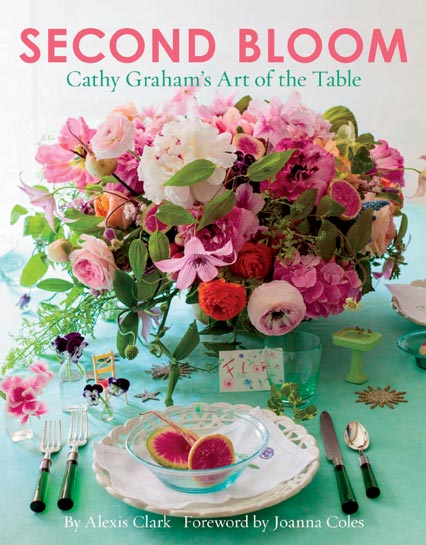 That affinity for all things eclectic and small developed out of many visits with her father to the Art Institute of Chicago’s Thorne Miniature Rooms. Alternatively, Graham’s legendary hostess skills and penchant for setting elaborate tables in elegant interiors was influenced by her late mother-in-law, Katharine Graham, the iconic American publisher once at the helm of The Washington Post. “She would have these glamorous D.C. dinners and at one point conversation would cease, and a question thrown out for all around the table to answer,” recalls Graham. “I was always so shy, but I observed.” It was at one of those evenings where she met Robert Isabell, the event planner extraordinaire famous for clients ranging from Studio 54 to the Kennedy family. “I asked Robert if I could be his apprentice, and not only gained a mentor but a best friend,” says Graham. She describes Isabell’s work as “magic,” and traveled with him around the globe orchestrating such feats as the London wedding of Marie-Chantal Miller to Pavlos, Crown Prince of Greece. “We did all sorts of incredible things and while I had always enjoyed doing flowers in my own home, people began associating me with them more and more, asking me to do benefits and private occasions.” Before he passed, Isabell had a studio prepared just upstairs to his own for Graham. 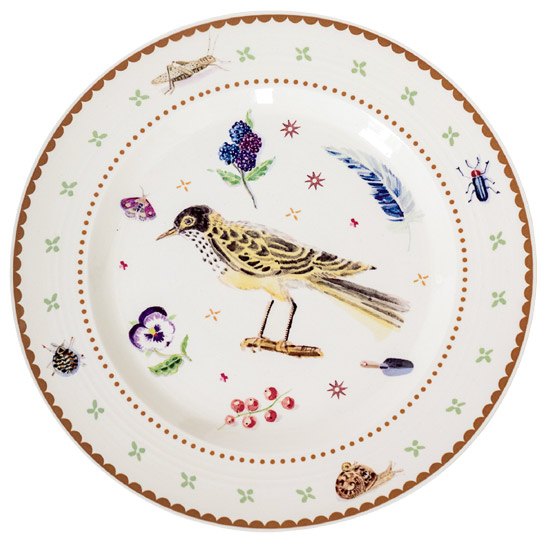 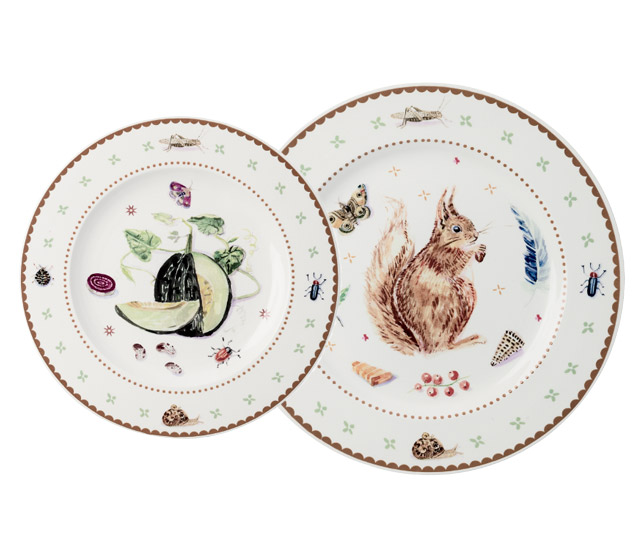 Today, there are hand-painted botanical plates and mugs recently launched as the Woodland Collection, part of a multi-series collaboration with ceramic lighting artist Christopher Spitzmiller and available exclusively through his website and Reed Smythe & Company. Graham has done a candle with NEST Fragrances, offers handmade papers, place cards, YouTube tutorials, has a fabric line coming and a second book in progress. “The apple never falls far from the tree,” as the proverbial saying goes with her children seeking out the arts in their coursework: daughter, Juliet, is an English major at Bard, and son, Tommy, is studying Film at Columbia College. Recently, Graham has returned to her roots providing editorial illustrations for former Vanity Fair Editor Graydon Carter’s online periodical Air Mail and its Sketchbook section. One of Graham’s latest likenesses to publish was of French fashion designer Coco Chanel with the header “Pictured here in her heyday.” A seemingly fitting tagline as well for Graham herself at the moment. 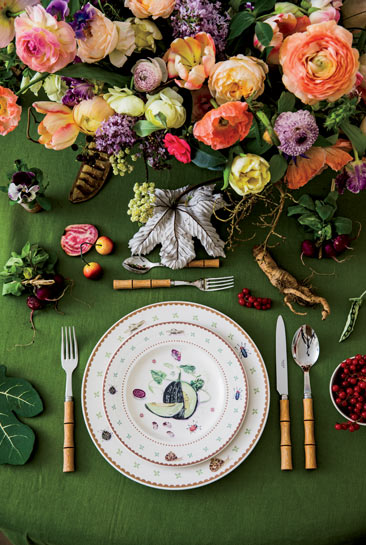 The gift box with book, Second Bloom: Cathy Graham’s Art of the Table, is available at cbgraham.com, and tabletop accessories available at reedsmythe.com and christopherspitzmiller.com. You can follow @cathybgraham on Instagram. 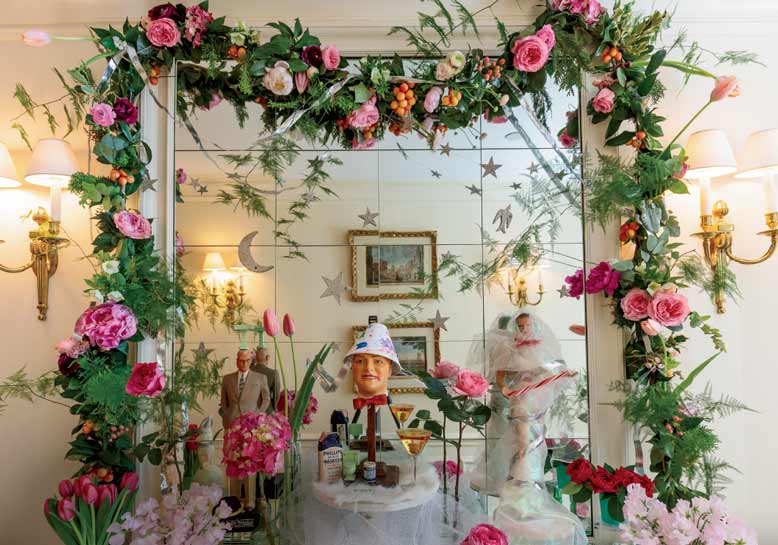 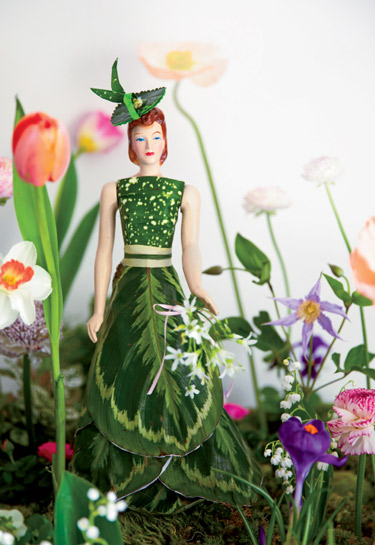