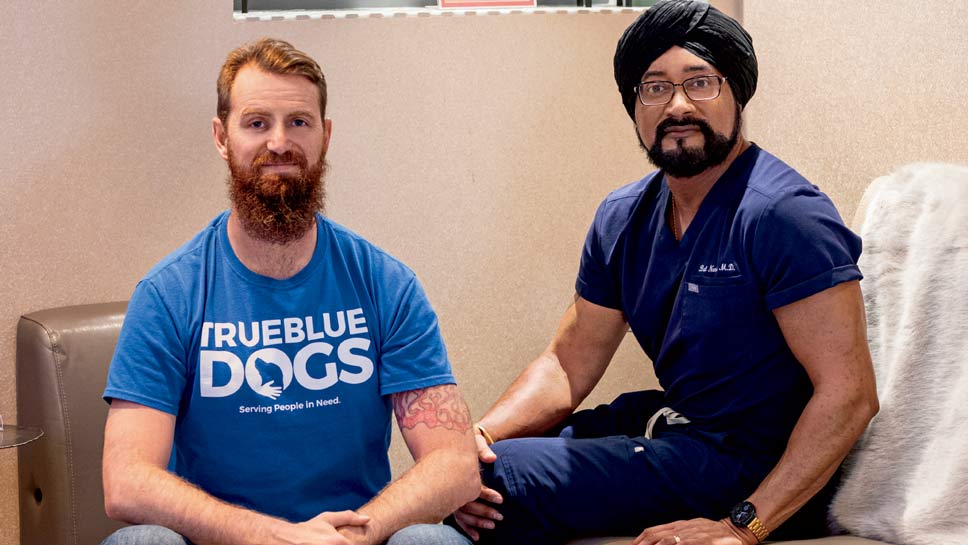 On November 11th we celebrate Veterans Day, but oftentimes those that serve our country battle mental illness long after their days of battle are over. IV Solution and Ketamine Centers recognizes our esteemed veterans and is honored to be able to assist them when it comes to their mental health with intravenous ketamine treatments that have been proven to drastically alleviate the symptoms of post-traumatic stress disorder (PTSD) and depression. In honor of Veterans Day and through the end of 2020, IV Solution will offer a 30 percent discount to veterans.

Ryan Mains, an Iraq war veteran and a 14-year firefighter and paramedic with the Woodstock Fire/Rescue District, is one example of a veteran afflicted with PTSD who has benefited from IV ketamine treatment. Officially diagnosed with a severe case of PTSD, Mains tried many treatment protocols before working with Medical Director Dr. Bal Nandra of IV Solution and Ketamine Centers.

“I was a little nervous about starting the treatments. As a first responder, I had a preconceived notion of what ketamine does when it is abused,” says Mains. “However, Dr. Nandra patiently addressed all of my concerns before I even had to ask him. He immediately made me feel comfortable by explaining the science behind controlled treatments and I decided to go for it. I’m so glad I did.”

Dr. Nandra tailored the treatments to Mains and after almost four years of suffering from PTSD, he is experiencing true lasting relief. His IV therapy began with six treatments with only a couple of days in between. “After the fifth treatment, I began to feel less heavy. I just didn’t have that awful feeling hanging in the background that had been in my life for so long. And, I’ve been able to maintain the balance since.”

Mains is now at the stage of booster treatments, having gone three weeks between doses seven and eight, and four weeks between doses nine and ten. His ketamine treatments supplement his psychotherapy appointments that he now maintains every other week. Mains notes that from October 2019 to January 2020 he was in therapy five days a week, and February to August (pre-ketamine) he was in therapy once a week.

Dr. Bal Nandra emphasizes that all plans are customizable. “Everyone with mental health struggles is on their own journey. We recognize this and tailor plans according to each patient. Whether they are a veteran, first responder, trauma survivor, or battling severe depression, anxiety, migraines, or chronic pain, we are here to serve everyone.”

Mains adds, “Since my ketamine treatments, I’ve felt better than I have in months. I’ve been telling everyone who will listen about how ketamine has changed me. My wife told me ‘it’s good to have you back,’ and I’m happy to be here.”

Mains is the founder of the non-profit Run For Our Lives and he completed 130 kilometers or just over 77 miles in May, raising more than $18,000 to support Illinois Firefighter Peer Support. For more information about Mains’ advocacy surrounding mental health and support, visit facebook.com/RunForOurLives.

IV Solution and Ketamine Centers is located at 712 N. Dearborn Street in Chicago. If you or someone you love is suffering from PTSD, depression, anxiety, or chronic pain, call 844-9-IV-MEDS (948- 6337) for a complimentary consultation or visit chicagoivsolution.com or ketaminechicago.com to watch and listen to the many patient testimonials, news, and radio stories.