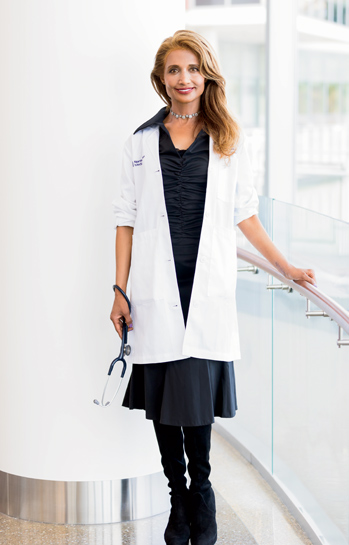 Growing up in an immigrant family—with a father from India and a mother from Afghanistan—Dr. Deeba Masood learned early on the importance of both education and civic duty. “My parents made this message clear,” she says. “We arrived in the United States for two purposes.”

So, even though she’d dreamt of one day becoming a writer, Dr. Masood instead pursued a career in medicine to fulfill the wishes of her parents, who worked several jobs to put both of their daughters through medical school. Now Dr. Masood is a leading allergist/immunologist at Northwestern Medicine Lake Forest Hospital with a dedication to diversity and compassionate patient care.

“My parents did not even have health insurance,” says Dr. Masood. “When we needed medical care, it was through Cook County Health, and we paid cash. It is important to my father and mother that my sister and I give back to support families like our own.”

Drawing on that experience, Dr. Masood volunteered her time and services in an underserved neighborhood in Pilsen, where she soon learned she’d need a translator to converse with the Spanish-speaking population. With two young sons at the time, she hired a nanny from the neighborhood, who immersed her family in the language until Dr. Masood became fluent.

When her two sons Bijan and Arjan reached high school, Dr. Masood brought them with her to work at a free clinic in Englewood on the South Side of Chicago, providing healthcare to those without regular safe and free access to the essential service. They made the trek every other Sunday for all four years of both boys’ Lake Forest High School experiences. Poverty, Dr. Masood explains, is a major deterrent to good healthcare.

“Even though I wanted to instill the same values of education and public service in my own children, they still had a choice in what they ultimately wanted to do as a profession,” she explains. “But regardless, through that exposure, they learned to be empathetic, compassionate, and to always be grateful and gracious for what you have.”

While Dr. Masood’s husband, Dr. Farhad Abar, is a computer scientist focused on artificial intelligence, Bijan and Arjan eventually chose to follow in mom’s footsteps. Bijan studied biomedical engineering at Johns Hopkins University and spent his free time coaching minority children through the Charm City Science League. He was later accepted to the Duke University dual MD/Ph.D. program on the merit of his civic leadership.

Arjan attended the University of Michigan and was selected as a Fulbright Scholar post-graduation, working in Jamaica to solve access to healthcare for newborns with sickle cell anemia. He is now a second-year medical student at Harvard and helps pregnant women without access to healthcare deliver healthy babies.

“I was pregnant during my training and was voted the ‘most fertile female,’ which made me feel embarrassed,” says Dr. Masood. “I hung my head low. But I have raised two of the most amazing world citizens, so the next time I look at my feet, it is only to admire my shoes.”

“I feel like I’m back home now,” she says. “A community hospital is a truly great place. Northwestern strives to build a community that values each person’s individuality and leads by holding each other accountable for diversity, equity, and inclusion.”

During the peak of the COVID-19 outbreak this spring, Dr. Masood and her team volunteered to treat patients in neighboring communities who did not have the luxury to shelter-in-place due to essential worker designations and financial needs.

“Northwestern Medicine is an institution that really cares about its patients,” she says. “I was cautious but not scared. I wanted to be there. That’s what I went to medical school for, after all.”

In 2016, Dr. Masood decided to face a mountainous task for the greater good. Along with her husband and sons, she reached the 20,000-foot summit of Kilimanjaro. The trek raised funds for Arzu Studio Hope, an organization with an innovative model of social entrepreneurship that helps Afghan women weavers and their families break the cycle of poverty by providing them steady income and access to education and healthcare by sourcing and selling the rugs they weave.

“My husband thought I’d slow them down,” she says. “I have asthma, so I had to anticipate challenges thanks to altitude sickness. I believe one can overcome any obstacle with the right preparation.”

Dr. Masood puts that theory into practice every day, even now writing poetry and haikus in her free time to express her creativity and fulfill that early wish of becoming a writer. The act helps her be present and practice mindfulness, something she says also helps her treat patients from head-to-toe.

“I always let my work speak for itself,” says Dr. Masood. “All the sweat is worth it to save someone’s life. Now I have letters from people who doubted me saying ‘thank you.’”

To Dr. Masood, we also say “thank you” for all you do.