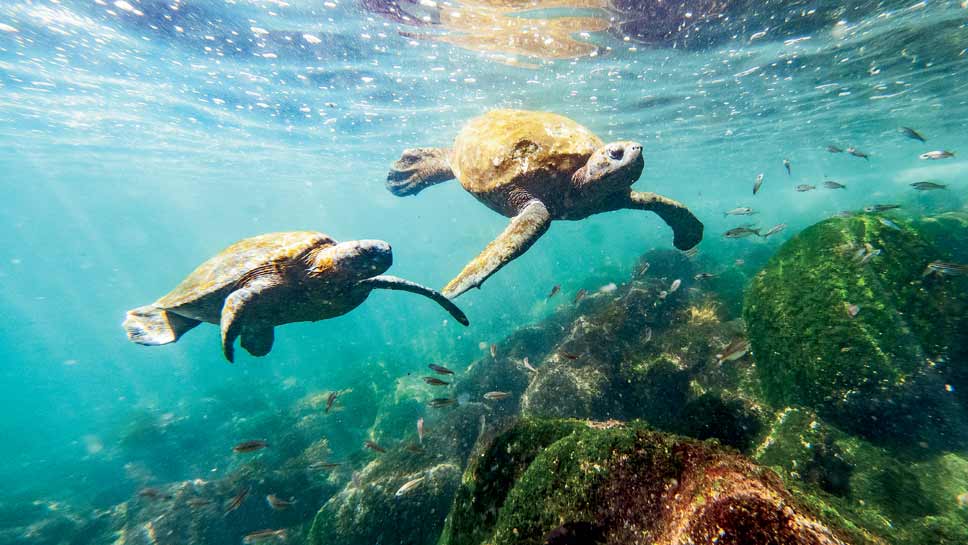 The Galapagos Islands are one of the world’s most elusive locations and the birthplace of Charles Darwin’s theory of evolution. They are a place to glimpse endemic species; those species that can be found nowhere else on earth. Each island has a distinct terrain. Be it white sandy beaches favored by sea lions or rocky surfaces dotted with cacti and iguanas or soaring cliffs home to a vast array of birds or lush landscapes favored by pink flamingos or volcanic outcroppings created by lava cooling on its descent to the sea. There is no better way to interact with the Galapagos Islands’ incredible beauty than on Ecoventura-operated sister ships Theory and Origin, Relais & Chateaux ten-cabin mega-yachts. The sister yachts sail the archipelago together and are typically the only two ships at any particular destination. 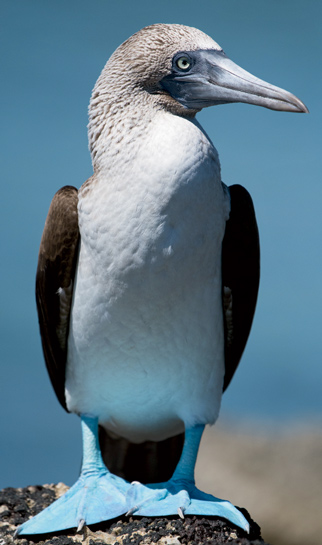 After a remarkably short set of flights from Chicago, my family arrived on San Cristobal Island where we boarded a swift, little skiff known as a panga. We set off for a thrilling ride to our yacht, the Theory anchored in the bay. We were excited to see sea lions lounging about on boats and darting around our vessel—the first of many encounters with these joyous creatures.

The Theory is appointed bow to stern in sleek, modern design. The first deck houses wetsuits and snorkel gear. We met here several times a day to board the pangas that carried us off to new adventures. A heavy metal door on this deck opens to reveal gorgeous blonde wood floors leading to the sleeping quarters. The top deck or “sun deck” with its full bar and hot tub is a glorious space for dining, sunning, and relaxing. The main deck holds the lounge where guests meet each evening for the day’s debriefing and a teaser for the next day’s activities. Outfitted with couches, gorgeous light fixtures, mirrors, and overflowing bowls of chocolate, the lounge proved to be a wonderful space to convene. Beyond the lounge, a fully stocked bar leads into the dining room where buffet breakfasts and lunches and several course dinners, all created with locally sourced ingredients, are enjoyed daily. 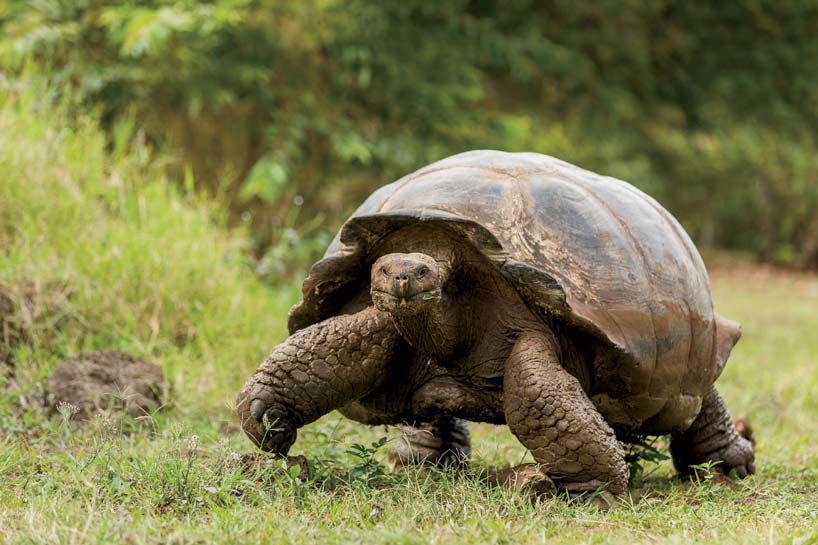 During dinners, our crew brought forth course after course with a flourish and accompanied each dish with a hearty pour of wine. At evening’s end, we descended to our ample rooms—adorned with mirrored vanity tables, floor-to-ceiling windows, a marble bathroom, and king beds. A deep slumber coaxed by the give and take of the undulating sea was quick to follow.

Often, during the late evening hours, our captain commanded the Theory toward a new destination and our next great adventure.

We followed Ecoventura’s “Beaches & Bays” itinerary, which visited the South East islands. Each day, in two groups of 10, we set off with our licensed naturalist who was an expert in all things Galapagos.

Our first day began with a delicious breakfast followed by a panga ride to Cerro Brujo or Wizard Hill. Here we communed with large black iguanas, playful sea lions, and a wide variety of birds ranging from brown pelicans and brown noddy terns to blue-footed boobies all dive-bombing the bluest of waters intent on lunch. Bright red Sally Lightfoot crabs scampered over the black volcanic rocks while our guide pointed out geological formations including the Cathedral, jokingly referred to as “Darwin’s Pants.” In the afternoon, we hiked Punta Pitt, considered one of the best sights for bird watching and one of the only places to see all three species of boobies—the blue-footed, red-footed, and the Nazca. At Pitt Point, we snorkeled with acrobatic sea lions who happily smiled for our GoPros. 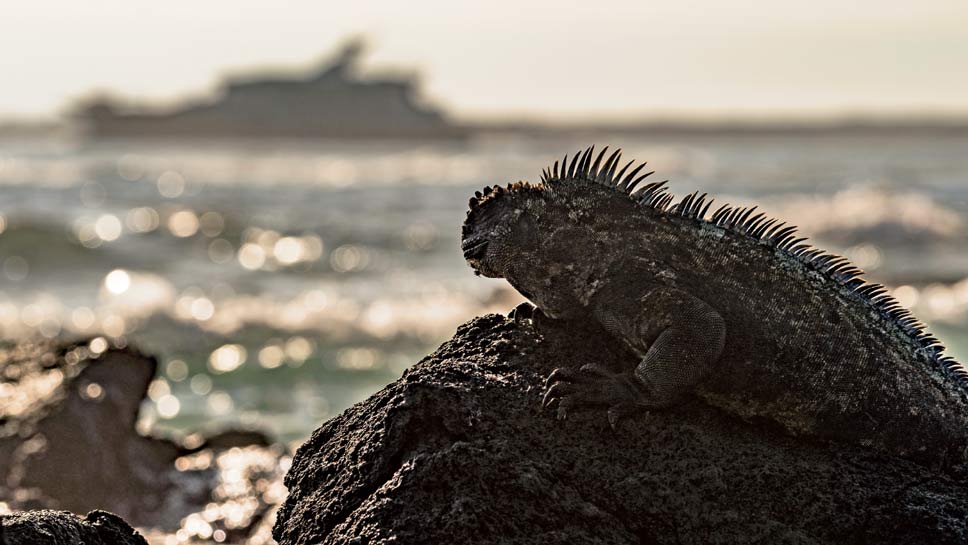 Iguana with Origin mega-yacht in the distance

On day two, we landed at Espanola Island where our guide pointed out a large number of endemic species, including the land iguanas sunbathing in their coats of many colors. While they are usually black, during mating season these iguanas develop bright red and green coloration from the algae they consume. Be careful not to step on these colorful fellows, who are so mesmerized by the sun they fail to notice tourists. As we hiked over a rocky cliffside to a magnificent blowhole, we passed an infinite array of birds including the worlds’ only nocturnal gull—the Swallow Tailed Gull—and fluffy baby boobies. On our journey back, we passed an inlet our guide referred to as “the nursery”—a nod to the numerous frolicking “pups” or baby sea lions. 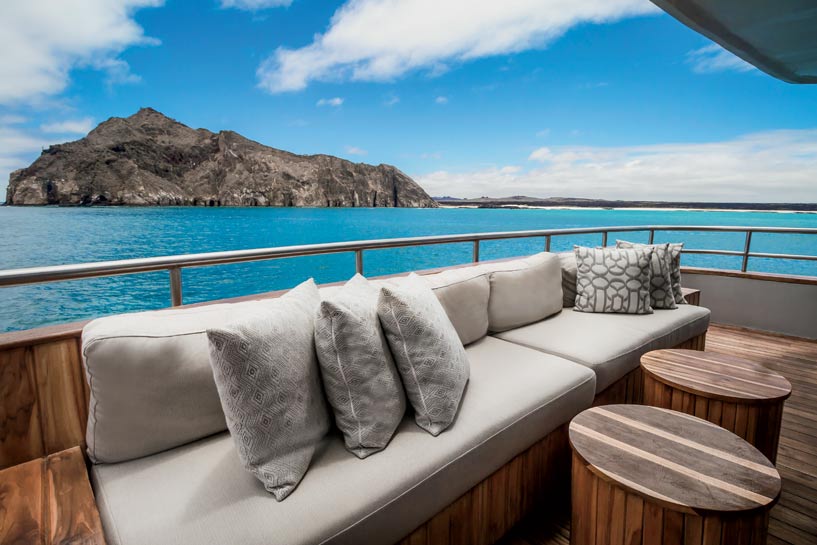 After an Ecuadorian ceviche cooking demonstration, we enjoyed lunch on the sun deck where we noticed schools of dolphins playfully surrounding the yacht. Next up was snorkeling at Tortuga Rock where we swam with sea turtles and a wonderful array of colorful fish including my favorite, the comical Parrotfish. Since I always hoped to swim with sea turtles, I was enchanted to encounter these creatures ebbing and flowing with the waves just a few feet from me—their chill personality perfectly captured in the Disney film Finding Nemo. Later that afternoon, we visited Gardner Bay’s beautiful white sand beach; home to scores of lolling sea lions.

Day three entailed a trip to the lush Floreana Island, which boasts green hills, gorgeous shallow beaches full of stingrays, and a brackish lagoon favored by pink flamingos. Following a delicious lunch on the sun deck and a short siesta, we snorkeled at Devil’s Crown—a shallow sunken crater brimming with whitetip sharks, gorgeous starfish, eagle rays, and to my delight, more sea turtles.

Day four we visited Santa Cruz, which bustles with giant tortoises. As we drove into the highlands, our driver had to navigate around several of these enormous shell-encased reptiles as they meandered in the road. We spent the morning strolling with the slow-moving giants, who can weigh in excess of 500 pounds. After visiting an astonishing lava tunnel, we headed to the Centro de Crianza to learn about the Galapagos’ most famous visitor, Charles Darwin. 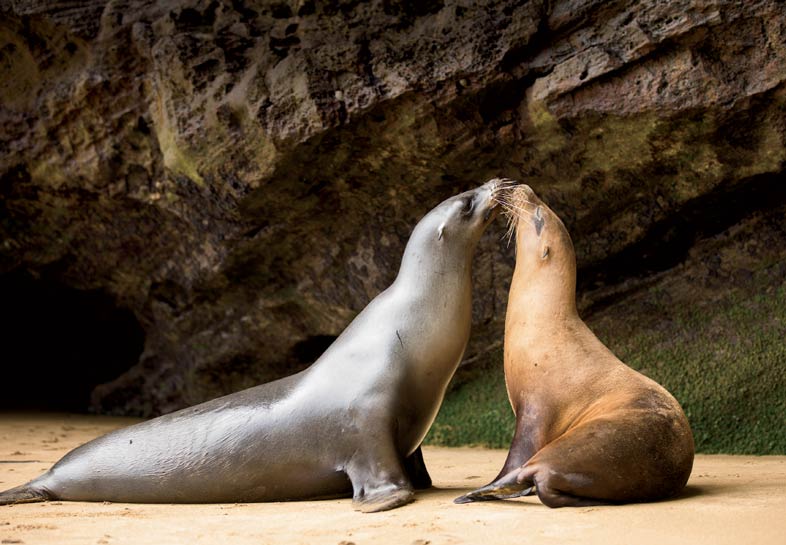 On day five, we set off for a vigorous hike around Bartolome Island. Our reward for the effort was a stunning panoramic view of Pinnacle Rock. During a short rest, our guide revealed the geology of the landscape, pointing out mini lava cones and bombs formed by flowing magma from past volcanic eruptions. Following the hike, we eagerly jumped into the refreshing crystal-clear water to swim with Galapagos penguins (the second smallest penguin species on the planet), schools of tropical fish, and whitetip sharks. On the way back to the yacht, I caught sight of three little penguins standing at attention—their stance humorously like the Queen’s Guard. In the afternoon, we visited Playa las Bachas—a beach favored by nesting sea turtles. Tracks were everywhere, revealing the turtles’ slow crawl up the beach to lay eggs and then the descent back to their watery home.

Day six began at South Plaza Island. The small islet is crowned with tall cliffs and features a rocky trail dotted with prickly pear cactus, a delicacy for the land iguanas. We marveled at the persistence of an iguana as it balanced precariously on one leg while holding on to the cactus for dear life, focused ever so much on breakfast. The island is also home to many birds such as the Swallow Tailed Gull, shearwaters, and finches. 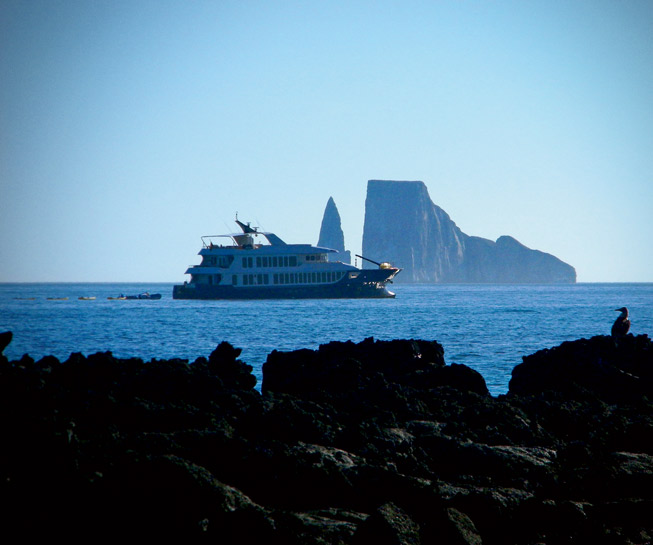 Returning to the yacht we sailed to North Seymour Island, where an expansive number of frigate birds inflated red sacs on their chests hoping to entice a mate. This day marked our last deep-water snorkel, which did not fail to impress as we saw hammerhead sharks, more whitetip sharks, turtles, my old friend the Parrotfish, and puffy, colorful starfish. The final evening on this unforgettable journey was highlighted by the Captain’s Farewell Party, where we toasted our new friends with champagne before one last exquisite meal. 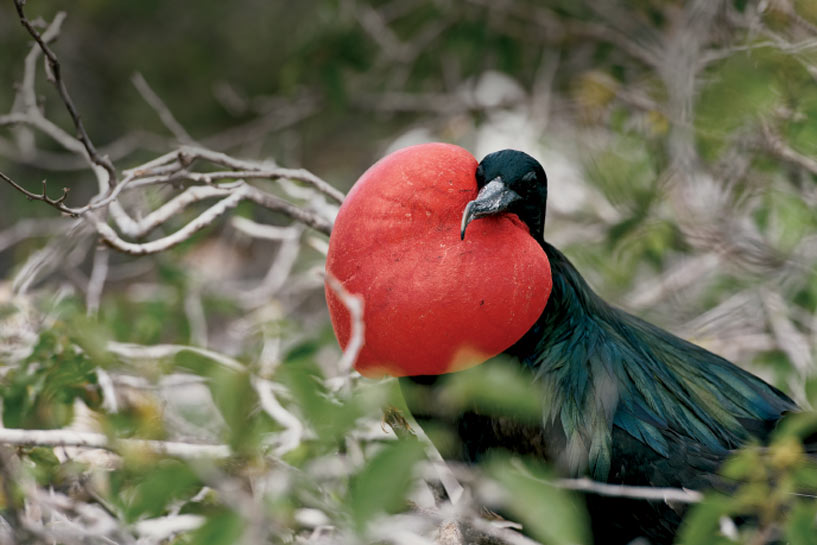 I had always dreamed of visiting the Galapagos Islands but never imagined the extent of their beauty nor the impact of an intimate communion with nature. These islands will touch your soul. Go as soon as possible … your great adventure awaits. For more information, visit ecoventura.com. If you are looking for an exclusive experience, inquire about options to charter the entire mega-yacht.

If arriving late in Guayaquil before a morning departure to the Galapagos or if you need a day room prior to a late flight back home, be sure to contact Hotel Oro Verde Guayaquil. In the heart of the city, the hotel offers shuttle service to and from the airport and is a wonderful place to land late at night or a place to rest prior to a flight back home. For more information, visit oroverdeguayaquil.com.