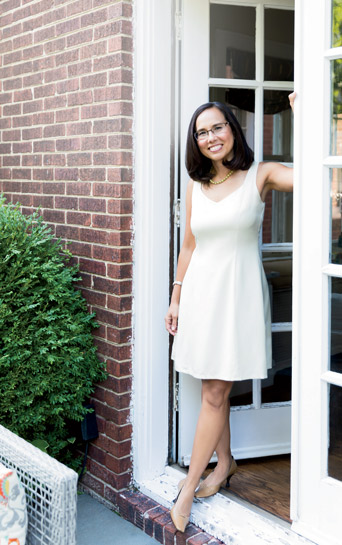 Born to a Vietnamese mother and an American military contractor, Campbell’s life journey began in Saigon during the Vietnam War. Moving to the United States, Campbell grew up in mostly a single-parent household in Hoffman Estates and Schaumburg.

After graduating from Hoffman Estates High School, Campbell matriculated to Mount Holyoke College and later attended Harvard Business School where she earned her MBA. Shortly thereafter, she became a management consultant, wife, mother, and finally, the sage of the concept she calls “radical generosity.”

“When my husband, Chris, and I got married in 1997, I had just graduated from Harvard Business School and he was entering Northwestern’s Kellogg School of Management for his business degree. We were living on one salary, and by the time he graduated, we decided that even though we’d have two consulting incomes, we’d run our operating expenses as if we still had one income so that we could save for our children’s educations (I was pregnant with the first of our two daughters), and we could still feel free to give money away. That probably sounds a bit radical already, but to be honest, I didn’t begin practicing radical generosity until my first trip to Tanzania in 2008,” she explains.

“The purpose of my visit was to see the child we had started sponsoring through World Vision the year prior. I thought that meeting her would be the highlight of the trip and though she was truly darling, it was her mother, Nasaru, who captivated me,” Campbell recalls.

“Nasaru was about my age, yet her life story read entirely differently. She hadn’t attended school, and at the time of my visit she had four children, one of whom had already made her a grandmother. Within a few months, she would be pregnant again with her fifth child. Every day she walked miles to fetch water and farmed the family’s land while caring for the children at home.”

Campbell’s trip to Tanzania and her experience with Nasaru reiterated the importance of altruism. Fast forward to 2014: LaSalle Street Church, where Campbell served as the stewardship educator, came into a windfall of $1.6 million. The first course of action was to give 10 percent back to congregants—$160,000 given away in the form of $500 checks to every member, with the instruction to “go do God’s work with it.”

Entitled Love Let Go, the campaign made news around the world and was the cover story for the Chicago Tribune on Christmas Day that year. Its success led Campbell and the church’s Senior Pastor Laura Truax to coauthor a book, Love Let Go: Radical Generosity for the Real World, chronicling the story of the church’s congregants.

The book effectively demonstrates the power of generosity— including the social science behind it—and its impact on individuals and the world. Fueling a journey that has given rise to Campbell’s consultancy directed at “the culture of giving” to church leaders, the book is the basis of a highly regarded TEDx talk. The message resonates with both adults and teens alike, including one New Trier student who invited Campbell to speak at an International Women’s Day Seminar at the school.

“So not only did the talk translate to a secular audience, it translated to the next generation of givers. I could not have been more overjoyed,” she says.

“I joke that my purpose in life is to get people to part with their money. Put me in front of any audience, and I won’t be shy about asking people to open their wallets. That’s because I believe that generosity has the power to transform us, and in doing so, to transform the world.”